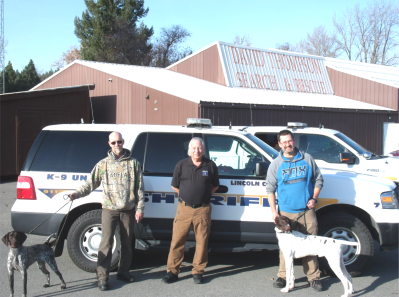 The Lincoln County Sheriff’s Department and the David Thompson Search and Rescue teams have recently added two new assistants; their names are Mila and Argos. Mila is a female, and Argos is a male. They are well-trained, intelligent, athletic, hardworking detection dogs.

A detection dog or sniffer dog is a canine trained and handled to use its senses for detection of substances such as explosives, illegal drugs, wildlife scat, currency, blood, and contraband electronics such as illicit mobile phones. The sense most used by detection dogs is their keen sense of smell.

Mila and Argos are German shorthaired pointers (GSP), and although pointer-like dogs can be traced all the way back to ancient Egypt, originally GSP’s were bred in Germany during the 19th century as a multi-purpose hunting dog that could point out game. Breeders were striving to not only create a great pointer, but also an all around versatile, obedient dog. The GSP was derived from the German bird dog, several German bloodhounds, and possibly Spanish or English pointers. Since the GSP was bred before the first studbook was published in the 1870’s, the exact breeds that went into its bloodline are unknown. According to mentalfloss.com, it is believed that in addition to the above mentioned breeds, dalmatian, weimaraner, tracking hounds, water dogs, scent hounds, and visla are possibly part of the GSP’s heritage as well.

These dogs were bred to hunt, and breeders wanted a canine that could catch game both on land and in water. They therefore have a variety of attributes making them a perfect choice for tasks in and out of the water. Their water resistant coats repel debris as they swim, while their spoon shaped semi-webbed paws act as paddles. On land, they are adapted with heavy nails that have claw-like gripping power to assist them in getting traction on even rough terrain.

The U.S. Air Force uses GSPs to sniff out explosives. Their excellent noses are designed to be long and functional, and contain synapses of such olfactory precision that when trained properly, they can detect explosives, drugs, and any suspicious odors. In the wild, wolves are also known to have similar powers of smell. According to the American Kennel Club, the GSP comes in eight different colors, including white, liver, and black. The nose color usually indicates the color patterns of each dog.

Recently, the Libby School Board was presented a School Board of the Year Honor Award for services and dedication by the School Board Administration of Montana. Currently, Libby’s School Board members include: Ellen Johnston, Chairperson; George Woodruff, Vice-chair; Lori Benson; Bgee Zimmerman; Jeff Stevenson; Alida Leigh, and Sam Rosling.

School Superintendent, Craig Barringer, nominated the school district’s Libby pre-k through 12 school board for the award and he told The Montanian, “The success of our schools is due largely to the quality of people that serve on our school board. They find ways to enrich our students and our community. Libby school board’s collective expertise and life experiences have not only led our schools to growing success, they provide a positive light that our community draws on.”

Barringer continued, “We are fortunate for the variety of people on our school board. Their unique perspective has led to collective, ongoing success in our schools and community. They have found a way to lead our District and our community to a stronger, more optimistic future.”

Libby’s school board manages four schools and has district buildings on six different properties. The elementary school has close to 640 students ranging from kindergarten through sixth grade.

The middle high school building has a student population of 520 in grades seven through twelve. There are two additional schools that educate students on both ends of the educational spectrum. These include the alternative school, which provides a personalized program for 24 students at the central school building, and the pre-kindergarten program, which is in its fifth year. The pre-k program averages 35 students per year. Since its initiation, the community kindergarten readiness rate has gone from 42% in 2015 to 80% in 2019. Students in the Libby public pre-school program have approximately a 92% rate of readiness for kindergarten.

The school board has led Libby Public Schools through many positive expansions of programs despite a student population that has declined. The loss of students resulted in a loss of funding, but success has grown.

The district became the first charter vocational program in Montana. This allowed the school to reopen the auto shop program, and to expand the welding program. These vocational programs inspire student success based on proficiency rather than seat time. In turn, the school has been able to offer even more classes for students without extending the school day. The program has generated support and even excitement from the community, which has resulted in approximately $30,000 in donations received from the community. These funds helped update equipment in the shop and they help to provide new programs.

The school board has also been a part of the internship program that has allowed many graduating seniors to spend part of their school day in meaningful internship programs throughout the community. This internship program continues to grow, as partnerships with over 20 local businesses and agencies have been established to engage student participation. The students learn about preparing, applying for, and interviewing for jobs. Eventually, the also learn about onsite expectations of performing the job’s tasks. They may also learn about life skills such as the importance of honesty, self discipline, having a strong work ethic, and respect for veterans of professions with time honed skills.

The school board and schools are also tackling the issue of recruitment and retention of new teachers in the district. They have instilled a new staff orientation day shortly before each school year begins.

The prestigious School Board Administration Honor Award was presented to the Libby school board on Monday, Nov. 11, at 6:30 pm in the Maki Theater.

At last Monday’s Libby city council meeting,  Tina Oliphant, representing the Kootenai River Development Council (KRDC), presented a request for consideration of economic development funding which would be used for a market study to assess a proposal by American Covenant Senior Housing Foundation (ACSHF). The Kalispell-based foundation is interested in possibly developing a senior assisted living facility in Libby.

“They initially were looking at three possible buildings,” Oliphant told the council and a group of about ten citizens attending Monday night’s meeting. “The school district administration building, the old high school, and the Asa Wood building. They liked Asa Wood.”

ACSHF is requesting community participation in conducting a market study which will include descriptions of the location and surrounding neighborhood, and a demographic analysis of Libby’s aging population.

The entire study is projected to cost $9,500 plus travel expenses which are not to exceed $1,000, and ACSHF will cover half of the cost. KRDC is contributing a quarter of the cost, $2,375, and is hoping the City of Libby will match their contribution.

Libby school district’s superintendent, Craig Barringer, also addressed the city council, acknowledging that the building is currently being used by a few groups and the grounds are home to Libby’s wildly successful community garden. He reassured the council that this project would not interfere with the garden in any way. “We spend a lot of money on maintenance for that building and get very little in return,” Barringer said.

Councilman Dufficy questioned the benefit of such a project, and added that he thought the school district should pay instead of the city. Oliphant replied, “the benefit is to take a building which currently is underutilized and turn it into something of real value to the city, and the study would produce a professional and through analysis of the needs of Libby’s senior population.”

Councilman Zimmerman said that asking the city to share costs for a study like this is very common. Councilwoman Smith said that this is really a relatively small amount of money. “We’ve spent more on many other things,” she said. “The state’s population is aging and retirees continue to move to Libby all the time.”

Barringer reminded the room that the money would come from the city’s community development fund, and councilman Zimmerman added that the city would reap the tax revenue from this project for years to come.

Councilman Dufficy again stated that he didn’t think the city should pay for it, and motioned to table the matter but his motion failed. Councilwoman Smith then made a motion to approve the request, with Councilwoman Williams seconding. The motion passed four to two.

Pubic concerns included when the study would be made public, and when the building would be appraised. Mayor Teske said, “There are lots of parts coming together at once.”

After the meeting, KRDC executive director, Tina Oliphant told The Montanian, “I am grateful for the council’s progressive view of their role in the community and the future impacts this project will bring to the city’s issues of an aged population. But I was concerned by the comments from a minority, who questioned if this should only be the school district’s responsibility. “