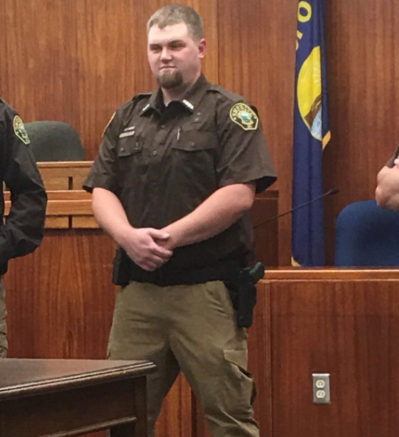 Derek Breiland has joined the Lincoln County Sheriff’s Department as a new deputy, and he is elated about it. Breiland told The Montanian, “I am beyond excited and grateful for this opportunity and look forward to continue working in Lincoln County with an amazing group of people.”

Breiland moved to Libby in 2006, and he has been here ever since. He started working at Northwest Motor Sports and has been there since 2013, working as a mechanic. He joined the Lincoln County Sheriffs Office Reserves in May of this year, and he says that he has enjoyed every minute of it.

“I have always dreamed of a career in law enforcement and got to see what it was like by joining the reserve program before I dedicated my life to a career I knew nothing about,” he said.

Apparently Breiland found it fulfilling. He continued, “I realized after doing it for a few months that this is what I really wanted to do and made it a goal to one day have this as a career.”

Officer Breiland complimented Deputy Steve Short who is the Sheriff’s Reserves Coordinator, and he has done a fantastic job at getting the program going. “I wouldn’t have had this opportunity without him, and all of his dedication and hard work in teaching me what being a Peace Officer is about:  Integrity, respect, honesty, dignity, and love for the community.”

Breiland also wished to thank and give a shout out to all of the LCSD Deputies for dedicating their time and knowledge in helping him as a former reserve, and also continuing in this new chapter. Reserve officers are volunteers. They are sworn Peace Officers that dedicate their time to the cause. Currently, Reserve Officers include Kelly Palmer, Mark Criner, Krissy Chumley, and Andrew Smith.

In related law enforcement news in Northwest Montana, U.S. Attorney General William Barr was part of a round table discussion set up by U.S. Senator Steve Daines with representatives from the local area, state, and federal law enforcement organizations that met in Kalispell recently. Barr seemed to indicate that encouraging Mexico to deal with methamphetamine problems in their country, would greatly help U.S. efforts. Meth, as it is known on the streets, is a serious threat to not only the peoples lives that it destroys, but also communities. Many of these communities are small, rural towns that see the crime rates rise in drug use and theft, and even violent crimes.

This problem causes trouble in the Northwest Montana area, though the NW Montana Drug Task Force that works against this epidemic is making progress. Recently, LCSD acquired two new sniff dogs, as they are sometimes called, to assist in their efforts. With the addition of highly trained and dedicated Sheriffs Deputies, and those dogs, the force is bolstered.

County landfill manager fills us in on upcoming plans 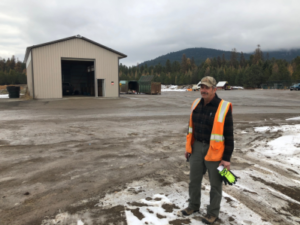 Bryan Alkire, Lincoln County Solid Waste and Recycling Landfill Manager poses for a quick photo while working at the landfill with his safety vest and gloves. Photo by Zach McNew, The Montanian.

Lincoln County Solid Waste is based in Libby, but operates in Eureka, Troy, and at Happy’s Inn too. They also operate 18 remote can sites throughout the county.

Bryan Alkire has been managing landfill and recycling operations for about four years now. He is head of a team that includes nine full time, two part time, and two seasonal employees. Alkire presented to the Rotary Club on Wednesday, Nov. 13 and shared some insight about the landfill and its operations.

Waste management, he said, rates as the fifth most dangerous job in the U.S., so safety is an extremely high priority. Landfill employees wear high visibility jackets and vests so they can be easily seen, and the site is managed using the most up to date safety standards.

Our landfill cell, he said, has about ten years of life left, so planning for our future waste management needs means planning for a new landfill cell  relatively soon. The current site, aside from having one of the best views in town, also has 126 acres of land and only 80 are being used. This means that there is already land available for the new landfill cell.

Having space is important, but continuously changing and expanding regulations will make both the cost and the construction of a new cell more difficult than it was in the past. An engineering firm has been retained to come up with options and cost estimates for the new cell, but at this point, the timeline, design, and cost still remains uncertain.

One of the new cell’s expenses will be the addition of a liner to comply with current safety regulations and help prevent future ground and surface water pollution. They hope to use a compacted clay liner, a simpler and more economical option than some of the others.

The current cell is unlined because it was grandfathered in when regulations changed. Once it has reached full capacity, it will be capped and managed as open space. Lincoln County Solid Waste will then be required to maintain the site for 30 years.

In the meantime, space saving techniques are being used to help extend the cell’s life. These include compaction, composting, and recycling of metals, cardboard, paper, automotive and vehicle batteries, and tires. A wood chipper is also used, and they are considering the costs and benefits of purchasing an air burner for wood waste that would incinerate while maintaining air quality.

In conclusion, Alkire took questions from Rotarians who learned that for the most part people are complying with CWD regulations very well, and that e-waste recycling usually comes to the area in the springtime but is always announced publicly. 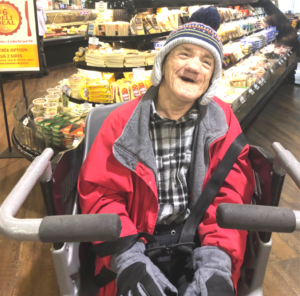 Rosauers recently purchased a Caroline’s Cart to assist shoppers with disabilities. Caroline’s Cart was created for special needs individuals and is made by Technibilt. It provides caregivers a with the ability to transport a special needs individual through the grocery store while shopping, without having to maneuver a wheelchair and a traditional shopping cart at the same time. The cart, in essence, functions as a wheelchair and shopping cart in one.

Currently Rosauers only has one Caroline’s Cart. It was purchased after a customer brought it to their attention that the problem needed to be addressed. Manager, Scott Erickson had no problem with helping to make it easier for Rosauers’ customers.

One of the main users of the new specialized cart is Achievements Inc. Achievements was founded in 1975 to provide opportunities for people with disabilities to live, work, and recreate in their community. They provide vocational training, residential training service, social, and recreational services designed to meet each person’s individual needs. Achievements’ staff members often take their clients grocery shopping and the new Caroline’s Cart is now a major help to them.

“The carts are provided for adults with disabilities or mobility issues…. These carts are not cheap, we started with one to make sure they get used,” Erickson told The Montanian.

Right now, there are six motorized carts and one Caroline’s Cart, but Rosauers would be willing to purchase more if a major need presents itself.

Erickson said, “Achievements comes in on Mondays to shop, and one of the clients loves it!”