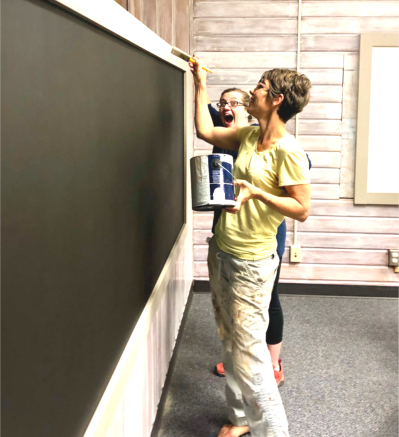 Pastor Zane Officer from Libby Baptist Church along with his family and others from the church were busy on Friday the 13th making a difference for local foster kids.

The work group, including small children, spent the day working hard to improve a supervised visitation room used by Child and Family Services at the old Mcgrade school building in Libby.

Pastor Zane and other volunteers told The Montanian that they want to make the room more family-friendly, welcoming, and comfortable for kids in foster care and their families who use it for family visits. They’ve been working on a complete overhaul of the area for over a month, and they still planned to do more work with new furniture, toys and books before calling the project complete. The room functions as an important neutral area for families to safely interact with their children.

Aaron Scofield of Child Bridge, the organization helping Pastor Zane to coordinate his church’s volunteer work there, told The Montanian, “We greatly appreciate the work of pastor Zane and all of the churches there in the Libby area and their support for Child and Family Services and children in foster care.”

Libby Baptist Church is one of many in the area that work with Child Bridge to help Child and Family Services (CFS).  Many CFS workers have large caseloads and few resources, so the partnership with Child Bridge is needed and appreciated, he said. Child Bridge is a nonprofit whose mission is to “find and equip foster and adoptive families for Montana children who have been victims of abuse and neglect.”  The organization partners with churches including Libby Baptist Church and Libby Assembly of God, as well as other organizations with overlapping missions. They work closely with Court Appointed Special Advocates (CASA) volunteers who provide court-based individual advocacy for abused and neglected children, and they also work with the Headwaters Foundation who funds the new Zero to Five initiative in Lincoln County coordinated by Dorey Rowland. Together with CFS, the network of support for local foster and adoptive kids and families is very strong, but more resources are always helpful, especially volunteers.

One of Child Bridge’s main focuses is on finding and equipping foster families. Scofield told The Montanian that they need, “families of all shapes and sizes who are ready and available to help.” They will even help walk interested  families through the steps to get licensed for foster care.

A resource group meets monthly in the Libby area for foster and adoptive families. Anyone interested in attending is encouraged to contact Child Bridge at (406) 837-2247 for more information.

Donald E. Wilson, better known down at the Legion Bar as “Whitey” has been waiting 60 years to become an official member of The American Legion. “I always wanted to join, and I felt I should be able to,” Wilson told The Montanian.

Indeed, Gunners Mate Wilson, who served three tours of duty in the South China Sea’s straights of Formosa,  on the aircraft carrier USS Hornet, is truly a combat veteran.

Wilson served from July of 1956 to July 1959, a period of time notably absent from the list of eligibility dates on The American Legion Membership Application form, which correspond to WW1, WW2, the Korean and Vietnam wars, Desert Storm and  Iraqi Spring and also including all soldiers serving in all branches from Aug. 2, 1990 until the present time.

But, because Wilson served in the years between  the Korean and Vietnam conflicts, a period of time commonly referred to as the “Cold War.” When he returned home, he was disappointed to discover that he wasn’t eligible to become a member. Wilson came down anyway, to support and socialize, and he made many friends over the years. He volunteered with upkeep and yard work, often just doing it anonymously, showing his support and patriotism. “I really wanted to contribute, so I sometimes did some weed eating and other things, and just never told anyone,” Wilson recalled.

Wilson was not alone, and he never gave up. Recently, the American Legion began getting a little more aggressive with congress, and finally  just this past July 30, they passed a resolution allowing The American Legion to accept as members, anyone who served in the military from Dec. 7, 1941 to the present, Wilson explained.

“We have been trying to get this changed since the 70’s, they kept saying they would change it, but they never did,” Wilson said.

So finally , on his eighty-first birthday, Whitey Wilson became a proud member of American Legion Post #97 in Libby, Montana. “Our membership is aging, and we are all working toward getting new members. We want everyone to remember that all veterans are eligible for membership now,” he said.

He also reminded The Montanian with a grin, “I’m glad to be here.” 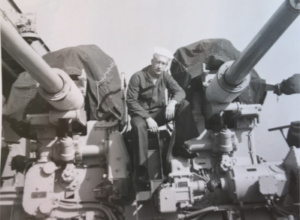 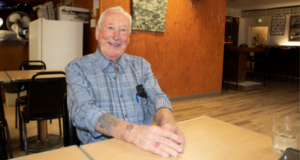 Tips for back to school bus safety

As back to school season puts grades, sports, friends, and an array of other priorities on the minds of parents and families, it is important not to forget about the school bus safety.

Parents remind your children that the bus does not always arrive at the same time every day. Your child should arrive at least five minutes early to their bus stop in the morning,  it’s a good idea to go to the bus stop with them or have them walk in groups.

Remind your children that their bus stop is not a place to play. A bus driver has many blind spots when behind the wheel of a school bus and may not see a student in the road. Especially in the early hours of the day when the sun has not yet risen. Other drivers, especially those without children in school, may not be aware of bus stops and will most likely not be watching closely for children in the road. Students should stand a safe distance from the road (at least six feet from the curb) to prevent any accidents.

When the school bus arrives, before approaching the bus, children should wait until the bus has come to a complete stop, the door has opened, and the drivers gives an okay. When boarding the bus, remind students to use the handrail and watch their step.

Let your child know that it is not safe to walk behind the bus at any time. This is one of the driver’s blind spots. If your child must cross the road, he/she should cross at least ten feet in front of the bus and only when it is stopped and the driver is aware of the crossing. Your child should make eye contact with the driver before crossing to ensure the driver’s awareness.

If a child drops something outside of the bus, a toy or book for example, the child should immediately tell the driver before retrieving the item. The driver may think it is clear to drive, not seeing the child.

On the bus, students should be sure not to distract the driver by yelling, eating, drinking, turning around, or standing up.  It’s also important to keep the aisle clear of backpacks and other things that could cause students to trip. Please remind your students to follow the bus driver’s rules and to be courteous to the driver and other students.

Not only do the drivers and passengers need to follow safety rules, but other drivers on the road do as well.

When children are exiting or boarding the bus, they may enter the road to get to the bus’s doors or to their home.

This is why all school buses have an attached stop sign that faces both directions. This should be treated as a regular stop sign. Other drivers need to come to a complete stop and wait for the sign to fold inward before continuing.

“People need to be more patient with us,” Huffman told The Montanian after sharing a story of a woman who nearly struck a student with her car upon passing the stopped bus, ignoring the stop sign.

Never tailgate a school bus. If the bus were to come to a sudden stop, you and the children on board would be in danger from the potential crash.

The school year is a time for students to learn and socialize. School busses play a big part in allowing students to enjoy these aspects of school.

Huffman reminded  The Montanian of this important message, “When driving a school bus, we are transporting Libby’s precious cargo.” 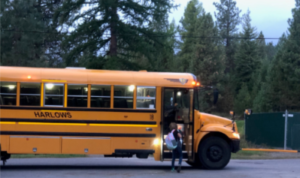