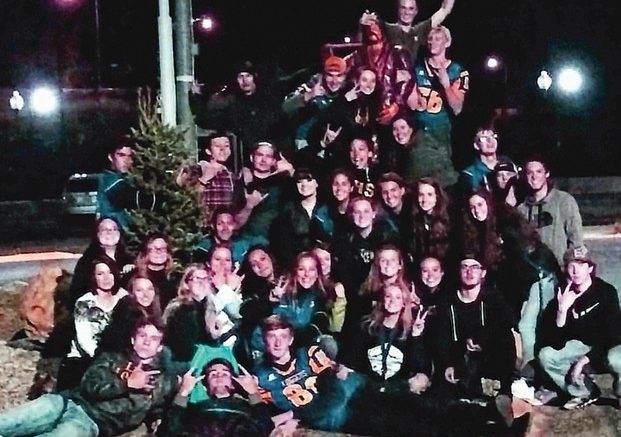 School spirit was at a high last week as the Libby Middle High School celebrated Homecoming.       To begin the week long celebration, students dressed up each day, following the chosen themes. These included Monday: Dress to Unimpress, Tuesday: Fake an Injury, Wednesday: Red, White, and Blue, Thursday: Unhinged (crazy clothes and hair), and of course to end the dress up days, Loggers blue and gold for Friday.

Monday, high school students used their artistic abilities to decorate Homecoming dioramas. Groups from each class got together and worked on the dioramas after school. Each group used their collective creativity while following the theme, “Adventures of a Logger.” Middle schoolers participated in a door decorating contest with their homeroom classes. At the end of the week, the dioramas were judged, and the Senior class won “Best Diorama.”

Each year during Homecoming week, students involved in any school activities are invited to read with elementary students. On Tuesday, many high school students made their way down to the Libby Elementary School, and read with students from kindergarten all the way up to sixth grade. After reading, the older students answered many questions about high school life like, “What are the differences between elementary school and high school?”

The Logger Activities Tailgate, sponsored by the Booster Club, was held Thursday afternoon. All fall activity participants were invited to eat by the football field. Later that evening, the Loggers lined up on Mineral Avenue for the annual Homecoming Parade. Following the parade, students made their way to the LHS football field for a bonfire and logging events. Students from each class participated in logging events like axe throwing, crosscut sawing, and peavey log rolling. The senior class ended up winning the relay that ended the evening’s events.

Friday, the middle schoolers had a chance to compete in their first annual Homecoming competitions out on the football field. The high school held their class competitions inside the Ralph Tate Gymnasium, with activities like human surfing, and tug-of-war. At the end of the day, the overall points had been added up from the class competitions of Homecoming week, and the Senior Class of 2019 won.

The Homecoming football game was Friday night. Before the varsity game started, the senior football players were recognized. The Libby Loggers beat Browning with a victory score of 41 to 14. During halftime, the Homecoming royalty was crowned. Libby Logger football player JJ Davis, and Libby Logger soccer player Bella Hollingsworth won 2018 Homecoming King and Queen. Saturday morning, the soccer and cross-country teams recognized their seniors before the Homecoming soccer games. The boys and girls soccer teams both lost their games against Polson. Later, the Froshmore and JV volleyball teams won their matches against Browning. Senior recognition for golf and volleyball was held before the varsity volleyball match against Browning. The Libby Logger varsity volleyball team beat Browning in the first three games. Following the victory of volleyball, the students attended the 2018 Homecoming dance at the Libby Elementary Gym. Overall, Homecoming week was a blast for all of the Libby Logger students.