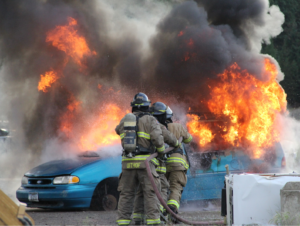 Members of the Libby Volunteer Fire Department approach a  car-fire ignited for training purposes at the Libby landfill this past Thursday, June 24.  See page  16 for more. (Photo by Stacy Bender) 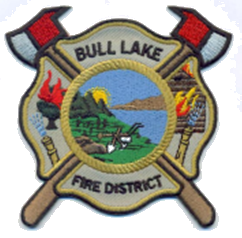 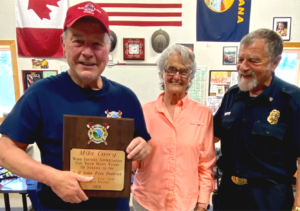 Mike Casey holds up his plaque following the
ceremony honoring his years of service to
Bull Lake Volunteer Fire Department.

Beside him are board member Sylvia Maffit
and Fire Chief Clyde Miller.
(Photo by Tracy McNew)

Mike Casey will officially retire from the Board
of the Bull Lake Volunteer Fire Department (BLVFD) as of June 30.  He was honored by the department for his years of service on Sunday, June 27 at the fire hall with a ceremony and reception.

Casey served as Bull Lake’s Fire Chief from 2004 until 2009 and was succeeded by current Chief, Clyde Miller. Casey was a firefighter prior to being chief
and has served as a volunteer board member since. During his tenure as Fire Chief, Casey faced hardships keeping the department going so he asked Miller for help.

That is when the two joined forces to make
improvements within the department and to set
goals of becoming bigger, more efficient, better trained, and to improve emergency response times.  Miller soon took over as Fire Chief and Casey joined the board.

Now, twelve years later, the department has over 25 firefighters on their roster, a fleet of vehicles and equipment, a helipad and quick-fill site, weekly
volunteer trainings, and an average response time of six minutes within their district.
“Bull Lake is better today than
we’ve ever been,” said Miller in his speech, “and we wouldn’t be where we are without Mike Casey.”

Based on a community risk
analysis, the Bull Lake Volunteer Fire Departments primary risk to address is wild land fires, but they are fully equipped to respond to structure fires, and they have an ISO rating of 6 – a very good rating for a rural volunteer department. ISO stands for Insurance Services Office, an independent organization that provides scores and standards for fire departments based on
their ability to protect their
communities.  ISO scores affect property owners by influencing insurance rates so Bull Lake
residents can feel protected, and
as an added benefit they pay less
for insurance coverage because this rating.

emergencies with their own ambulance service.
They send teams to fight wildfires throughout the western United States as needed and when they have enough volunteers to serve the needs of the Bull Lake community.  Their top priority is the protection and safety of the people and property within the Bull Lake Fire District.

Currently, BLVFD is working toward the
construction of a new fire station which will position them to be even more effective. The new site is a
four-acre plot of donated land right on Highway 2
upon which they hope to begin building this year.
Volunteers have been working for three years to clear enough dirt at the site to begin building and have moved over 250,000 cubic yards to date while still responding to every emergency in their district.

Casey’s retirement means the loss of a valuable volunteer, so now is a great time to get in touch
with BLVFD if you are interested in becoming a first responder for the fire department.  “It’s an important and fulfilling endeavor,” said Casey. “I encourage
anyone who lives in the district to give back to the community by volunteering with Bull Lake Volunteer Fire Department. You’ll learn a lot and gain a second family.”

Hydrate. Whether you feel thirsty or not,
drink plenty of water to avoid becoming
dehydrated, especially when you’re working
or exercising outside.
Educate yourself. Keep up with the latest
temperature and heat index forecasts and current readings (take actions to stay cool and safe when the temperatures hits 85 degrees or the heat index hits 90 degrees). Know the warning signs of a heat illness, and how you can stay cool.
Act quickly when a heat illness is suspected.
Seek medical attention immediately for any of these warning signs: cramping, rapid pulse, heavy sweating, hot red skin, dizziness, confusion,
nausea, vomiting.
Take it easy. Anyone working or exercising
outdoors should avoid overexertion, especially
between the hours of 11 am and 6 pm. Take
hourly breaks in the shade or in air conditioning.

Reminder on City of Libby Fireworks Ordinance
From the desk of Chief Kessel, Libby Police Department

9.32.030 – Fireworks unlawful. It shall be unlawful to sell, transport, use, explode, or possess any fireworks within the city except as provided in this chapter. The city shall seize, take, remove, or cause to be removed at the expense of the owner all stocks of fireworks or combustibles offered or exposed for sale, stored, or held in violation of this act.

he city shall have the power to grant permits for supervised public displays of fireworks to be held therein by the city, fair associations, amusement parks and other organizations or groups of individuals.

For a full list of this and all city ordinances, visit:
https://library.municode.com/mt/libby/codes/code_of_ordinances