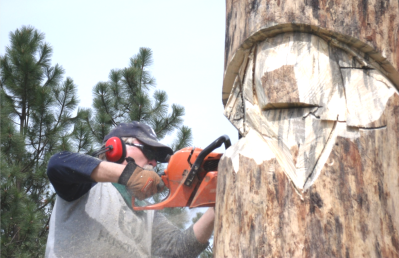 Lera Kelly Parker is an amazing Montana woman and the heartbeat behind a beautiful story of love and life in the woods of northwest Montana. This story takes us back to a time when Libby was the only town in any direction for more than a hundred miles, and the rest of the country was mountains, timbers, lakes, rivers, and wilderness. A time when some of the original foresters like Herb Neils of J. Neils Lumber Company describe Libby as being situated in the midst of a forest so vast that you could hike to the Canadian border without seeing a road or, if you should take the wrong turn, all the way to the Columbian icefields without leaving this forest or seeing another human. And if you did take one of the primitive roads in the area, you would pass road signs that read game crossing, range cattle, or watch for caribou, all full of buckshot holes.

Though to some it may not seem long ago in chronological years, this remote corner of Big Sky Country remained relatively untouched by modern development even into the post World War II boom times. A forester’s paradise, so to speak.

Lera’s husband Mel Parker was born in Lethbridge, British Columbia, on April 1, 1937. His family later moved down to old Rexford, Mont. Mel graduated with a forestry degree from the University of Montana in Missoula in 1957. He went to work straight away in the old Rexford logging camp. Old Rexford was located south of present day Rexford, and was flooded when the Libby dam was built. The town was moved north before dam construction began.

Mel Parker worked for 27 years as a forester at St. Regis Timber. Those were some of the heyday years of forestry and logging in this part of the world. It took strong, independent men with exceptional work ethics to get the job done. They had to be both smart and tough, and usually had big hearts too. These men were memorialized in a poem entitled So God Made A Forester, written by Bruce Vincent and Jim Peterson of The Evergreen Foundation. The poem begins, “And on the eighth day, God looked down on the earth he had created and said, I need an old school conservationist, someone who will care for the forests I’ve created, someone who understands that I planted these forests for man’s pleasure and needs.” So God made a forester.

The foresters of this era were indeed exceptional men. This reporter cut his teeth in the forestry field in the mid 1970’s and was privileged to work with and be mentored by some of these men in the woods of northwest Montana. They were tough, but fair. Demanding, but understanding. Firm, but kind. Men like John McBride, Gene Yavah, Russ Hudson, Gene Decker, Mark Schoknecght, Al Corda, and yes, Mel Parker. These guys did not tolerate slackers. A timber stand examiner or timber cruiser was expected to measure a reasonable number of accurate plots per day, whether in blowdown, heavy rain, exhausting heat, dangerous winds, or on snowshoes after a recent storm. If one worked on the logging unit in the harvest process, they accepted the danger. There were no emotional safe zones designated on the logging unit. As the late 1970’s progressed into the early 1980’s, multiple use concepts were becoming more popular, and the senior foresters rolled with it. More considerations were given to wildlife, fish habitat and stream quality.