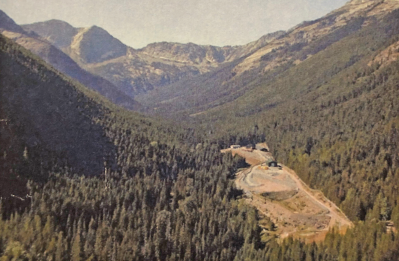 An aerial photo of the current footprint of the proposed Montanore Mine project.  It is not anticipated that the footprint will change during the evaluation phase. Photo courtesy of Hecla.

Hecla anticipates that when the Montanore mine’s evaluation project  begins, it will employee 30-40 people for up to five year. Workers will extend the 14,000 foot underground evaluation tunnel, called an adit, by 4,000 more feet to obtain ore samples. The work is expected to cause little or no new land disturbance, according to Hecla.

The intent of the evaluation project is to conduct additional exploration, drilling and assessment of geochemical, hydrologic and other information to make decisions on how best to proceed with the mining phase and assure that environmental impacts are mitigated, said Doug Stiles, General Manager of Hecla Montana. Stiles was in Libby last week along with Luke Russel of Hecla and Bruce Vincent of the consulting firm, Environomics. The trio discussed new developments on the proposed Montanore evaluation project with The Montanian and others.

The United States Forest Service (USFS) recently issued a Supplemental Environmental Impact Statement (SEIS) for the Montanore evaluation project, and they will be accepting public comment on the SEIS until August 8.

This, once finalized,  would not permit the whole mining project, but it would allow the evaluation phase to move forward. A public meeting on the evaluation project is scheduled for Tuesday, July 23 from 6 until 8 p.m. at the Kootenai National Forest Supervisor’s Office in Libby.

Vincent told The Montanian, “What people  can do right now is go to the public meeting on July 23, and write a comment on the project. Agencies  need to hear from the local community.”

It is hoped that following the comment period, a decision will be made early next year which could authorized the exploration phase. Hecla would then have to update their plan of operation to reflect what is approved before starting work. In addition, there is always a possibility of  more litigation which could lead to a court remand of the decision, once again delaying the project timeline.

Vincent said that public comment is important to ensure that local voices and concerns are heard and addressed. He credits the vocal support of locals and local, state and national representatives for helping to make the project a priority. “As a community, we should applaud the USFS and FWP for getting this work done like we asked. We now ask that they continue to prioritize it.”

Following the evaluation phase, Hecla anticipates that the Montanore mine project itself would provide over 300 local jobs for 25 to 30 years.

Work on the proposed Montanore mine began back in 1980 but was never fully developed. In 2016, Hecla Mining purchased the Montanore project following a final Record of Decision that would have allowed the project to move forward, but in May of 2017 due to law suits, a court remanded the ROD, EIS and Biological Opinions back to issuing federal agencies who have now responded.