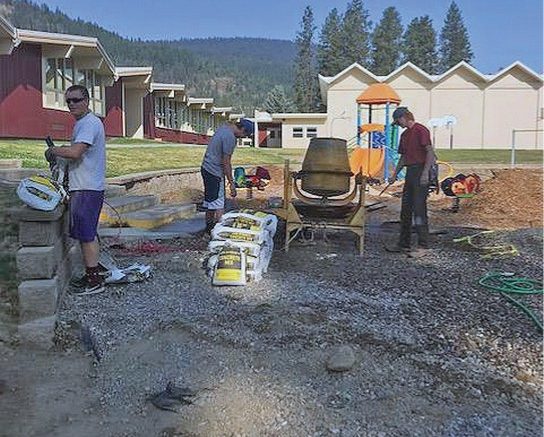 With the school year fast approaching, final touches are being put into place on Troy Public School’s summer projects. Members of the school staff, city and county workers, and students  have all been contributing to various upgrades throughout the summer.

This year, the school has been able to make numerous safety improvements including security camera updates, adoption of an in-school Community Response System, exterior door safety upgrades, new designated visitor parking spots, updated evacuation maps and emergency action plans, and an emergency management guide update. More safety improvements are still being discussed which would also benefit the wellbeing of faculty and students.  Some of the students summer projects have consisted of painting bathrooms at Troy High School and installing new playground equipment at Morrison Elementary. Their contributions have been made through the school-to-work program, where students at least 14 years of age can earn credits or a wage for their participation in a local field of work including work for the school district. The program gives students a head start gaining work experience they’ll need after high school.

The Morrison Elementary playground project has been done in three phases which have taken place over the last few years. The project is scheduled for completion this month, before the kids’ first day back in their classrooms.

A new large rope climbing apparatus is being added to help complete the playground improvement. Fencing is also being fixed, and  concrete walkways have been completed. All of these upgrades were made possible by multiple grants awarded to the school. The Laura Cooper Memorial Foundation, school-to-work students, and the city and county generously donating time and labor for this large project.

Several pieces of play equipment specifically designed for preschoolers, including a small play-set and sit and rockers have been purchased using funding from the state.

Phase I was the addition of a concrete basketball court, a larger play-set, and a seating wall. Phase II added more play equipment and picnic tables, and phase III has included new concrete foursquare and tetherball courts, and the installation of preschool play equipment.

Cooper was a parent, volunteer and substitute teacher who was killed in a motor vehicle accident while on her way to school in March of 2017.

With recess being fun, healthy and a favorite time for students, there is no doubt they will love their newly renovated playground.

Jacob Francom Morrison Elementary Principal, and Troy Public Schools Superintendent said to the Montanian, “I think this is a great example of the community coming together and doing something wonderful for our kids.”

Photo of concrete pouring at the Morrison Elementary School playground by Zandra Johnson, The Montanian.