On Tuesday, Nov. 12 at 5 p.m. at the Maki Theater in Libby, the Kootenai River Network hosted a panel discussion on selenium issues that was open to the public. Jim Dunnigan, Fisheries Biologist for Montana Fish, Wildlife, & Parks served as moderator, and asked all participants to respect the rules of politeness and manners, and to let everyone finish their statements.

Montana DEQ led off the discussion with a report on monitoring status levels for selenium in seven species of fish. Waters south of the Canadian border including Lake Koocanusa and the Kootena River to the Idaho border were the focus of this sampling.

The Elk River flows southwest near the town of Sparwood and joins the B.C. portion of Kootenay Lake just west of Grasmere about five miles north of Canada’s border with Montana. Teck, a mining company with operations in B.C., published the Elk Valley Water Quality Plan – Five Year Update, and mentioned as stated on page three of that publication: Water quality challenges in the Elk Valley are connected to the long history of mining in the region.

The mining process generates large quantities of leftover rock that contains naturally occurring substances such as selenium, an element that is essential for human and animal health in small amounts.

Water from both precipitation and runoff flows through these rock piles and carries selenium and other substances such as nitrate, into the local watersheds, these substances can adversely affect aquatic health.

Teck states that  they are fully committed to finding solutions and this work is at the global forefront of managing water quality in mining. More information from Teck is available online at teck.com/elkvalley or by email at feedbackteckcoal@tech.com.

Montana Department of Environmental Quality in their latest Selenium Site-Specific Criterion Update states: Selenium (Se) is a micro-nutrient, essential for biological processes to occur for humans and animals. Although selenium is an essential micro-nutrient, at high levels it can be toxic. The report further states: A threatened waterbody currently meets water quality standards but will likely exceed if current trends continue. The report defines a Site-Specific Standard as: Site specific water quality standards are derived using data from a specific water body or region. In this case, Lake Koocanusa.

The 2016 EPA National Criteria recommends states adopt site-specific selenium standards whenever possible because of the way (Se) bio-accumulates and moves up the food chain is very dependent on those site specific conditions. For more information MTDEQ asks to please visit www.deq.mt.gov/DEQAdmin/LakeKoocanusa or www.lakekoocanusaconservation.pbworks.com

In the ELSEVIER report on Aquatic Toxicology 57 (2002) available at www.elsevier.com/locate/aquatox and titled Symptoms and implication of selenium toxicity in fish by A. Dennis Lemly, it refers to pathological effects found in fish such as high selenium levels causing blood sinuses in the gills to show extensively swollen and become packed with crythrocytes. This reduces respiratory capacity and can lead to metabolic stress and death. In the same report, they describe symptoms of selenium poisoning in fish causing selenium -induced cataracts. An additional abnormality of the eyes associated with Se poisoning as being edema-induced protruding eyeballs, commonly known as bug-eyed or pop-eyed fish.

The rules of politeness and general manners that Dunnigan asked to be respected at the beginning of the program were acknowledged and used. Agency representatives reiterated their commitment to monitoring selenium levels for any ill effects.

Questions from the public were taken at the end of the program  during a short question and answer period. Inquiries were made related to the effects on White sturgeon, which the Confederated Salish/Kootenai Tribes representatives concurred was a matter of concern to them. A retired hydrologist asked if B.C. Ministry of Environment was committed to establishing laws, and whether they were willing to sign a Memorandum of Understanding (MOU). One member of the local outfitter and fishing guide community said they have seen fish with popped-out eyes, and that it (Se) is ruining the West Slope Cutthroat fishery.

Dave Hadden, of Headwaters Montana asked how B.C. can be considering adding more mines when the water quality is suffering at this time. Teck Research and Development reports that they are improving mine designs to better control release of water quality constituents at source, and identifying and piloting improved methods for treating mine affected water. 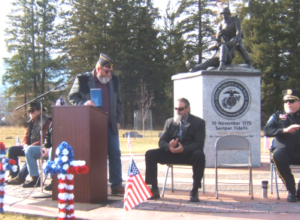 Commissioner Mark Peck during his Veteran Day speech at Riverfront Park in Libby. Photo by Moira Blazi, The Montanian.

On Monday Nov. 11, Veteran groups came together with civic leaders to hold a memorial ceremony at Libby’s downtown Riverfront Park.

Beginning the ceremony, Libby high school student, Hanna Beber, sang a beautiful rendition of  the Star-Spangled Banner. Pastor Scott Granger offered a scripture reading and prayer of gratitude for Veterans, and Mayor Teske led the assembled in reciting the Pledge of Allegiance.

Peck then took the podium,  speaking about how blessed, yet divided we are as a nation.

“There’s a key thing that is missing, and I think that thing is gratitude,” Peck told the assembled crowd. “We all have come through as a nation,” Peck lamented a seeming lack of gratitude among todays youth. “I know that  we all will survive these hard times, if we just take the time to appreciate what we have.” he said.

Next up, Mayor Teske asked the crowd to observe a moment of silence in honor of recently deceased, beloved community leader Todd Berget. Teske reminded the crowd that the beautiful memorial statue, which depicts a WWII veteran holding up a young gulf war solider, was based on an original design by Berget.

“He listened and learned what folks wanted and helped us bring that vision into reality,” Teske said about Berget.

Libby Police Chief Kessel, combat veteran and dedicated career law enforcement professional, said a few words next. Recalling his experiences in the Army in Beirut, Kessel stressed the importance of service. He said, “Service is what Veterans Day is all about,” and he reminded the crowd of the hardships our veterans have had to endure.

He lamented that, “Amidst all the political fighting and arguing, public officials today have forgotten how to serve.”

Since 1999, EPA has had a significant presence in Libby, Mont. because of the Libby Asbestos Superfund Site. Cleanups of properties in Libby (Operable Unit 4) and Troy (Operable Unit 7) are now complete, and EPA plans to transfer leadership to Montana Department of Environmental Quality (DEQ) in April.

Operable Units (OU) 4 and 7 of the  superfund site will transition into an operations and maintenance (O&M) phase at that point.

As part of ongoing O&M, tools will need to be implemented for protection of EPA’s remedy and in turn, protection of human health into the future. These tools, called Institutional Controls (ICs), “will be used for the foreseeable future,” according to EPA.

ICs will include programs, laws, and administrative processes to help prevent exposure to Libby Amphibole (LA) fibers that remain in area soils and buildings. ICs will also inform property owners and workers of LA presence so they can avoid exposure.

EPA and DEQ worked together to develop the Operable Units 4 and 7, Draft Final Institutional Control Implementation and Assurance Plan (ICIAP), and released it for public comment on Oct. 28.

The public comment period for the draft ICIAP will close on Dec. 31, and the ICs will be finalized after comments are evaluated. For this reason, a  specific timeline for finalization will be dependent on comments received.

Everyone from renters and real estate agents, to contractors and even vacationers, will be responsible for understanding and adhering to the ICs once they are finalized, so the public is encouraged to review and comment on them while they are still in draft form.

The draft ICIAP and a simplified four-page fact sheet can be downloaded from EPA’s website at www.epa.gov/superfund/libby-asbestos. They are also available at the Libby and Troy libraries.