A song entitled “Time,” written by Mason, Waters, Wright, and Gilmour of the world-famous rock band Pink Floyd, can be heard on the album titled “Dark Side of the Moon” (1973), is about how time can slip by, but how many people do not realize it until it is too late. The lyrics state in part, “…so you run and you run to catch up with the sun but it’s sinking, racing around to come up behind you again.”
On Sunday, March 14, many peoples of the world including the countries of the United States, Canada, the United Kingdom, the European Union, and others will implement an adjustment known as daylight savings time. Typically, citizens initiate this process by setting clocks ahead by one hour in the spring (spring forward) and by setting clocks back by one hour in autumn (fall back).

The rationale for enacting the spring forward and fall back adjustment of clocks is often explained by examining the benefits of this practice for agrarian (agricultural) societies. Daily routines of work in the field and the personal habits of agricultural workers are managed and affected by the length of daylight hours.

Consideration of solar time is paramount to those who work with the land and changes a bit each season due to the tilt of the earth’s axis. Conversely, industrialized societies generally adhere to a clock-based schedule as most daily routines do not change much during the four seasons of the year.

New Zealand entomologist George Hudson was one of the first to propose our modern daylight savings time. Interestingly, he was an entomologist who found these adjustments gave him more time to collect and study insects. Some publications also reference outdoorsman William Willett of England, an avid fly-fisherman and golfer who disliked cutting his sporting days short and published a paper proposing daylight savings time adjustments.

“The first real experiments with daylight saving time began during World War I,” reads Why Do We Have Daylight Saving Time? by Erin Andrews (updated for the History website on October 26, 2020). “On April 30, 1916, Germany and Austria implemented a one-hour clock shift as a way of conserving electricity needed for the war effort. The United Kingdom and several other European nations adopted daylight saving shortly thereafter, and the United States followed suit in 1918.” The time shifts were namely a wartime act and later repealed in 1919, the article went on to share.
“Standard time ruled until 1942, when President Franklin D. Roosevelt re-instituted daylight saving during World War II,” Andrews wrote. “This time, more states continued using daylight saving after the conflict ended, but for decades there was little consistency with regard to its schedule.”
“Finally, in 1966, Congress passed the Uniform Time act, which standardized daylight saving across the country and established its start and end time in April and October (later changed to March and November
in 2007).” 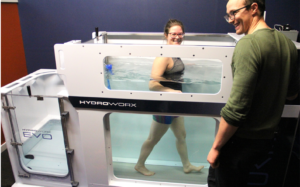 Ben Moerkerke, DPT and Jenna Bradford, DPT, work together during hands-on training with the new EVO Aquatic Therapy Pool  recently installed at OrthoRehab in Libby.  Bradford gained a feel for the underwater treadmill their clients will soon be given the opportunity to utilize while Moerkerke worked on mastering the controls.  Photo by Stacy Bender

“We’ve been considering adding aquatic therapy for the last five years,” shared Tim Whalen, Clinic Director at OrthoRehab in Libby. “Lincoln County has an aging population, yet one that would like to remain active to enjoy the various recreation activities our area has to offer.”

“Aquatic therapy is advantageous for a number of populations,” shared Whalen. “Including but not limited to those recovering from surgery, arthritis, chronic pain, low back pain, lower extremity joint sprains, muscle sprains, post-stroke or traumatic brain injury, and athletes looking for a quick return to their sport.”

“Broadly speaking, the buoyancy of water allows for all of these patient populations to exercise and move with less force put through their joints and soft tissue, making it less painful,” Whalen added.  “Additionally, the hydrostatic pressure of water helps decrease swelling, and warm water generally has therapeutic properties. We can help patients move their joints through a greater range of motion sooner and with better biomechanics after an injury, thus speeding up the recovery process.”

Whalen further explained that with the aging demographic here in Lincoln County, many are considering joint replacements to help them maintain an active lifestyle.  OrthoRehab’s new EVO Aquatic Therapy Pool will prove beneficial and perhaps encourage those who have been on the fence about joint replacement. Aquatic therapy will lessen the initial stress on the joint following surgery, decrease pain, and allow the patient to move through their full range of
motion.

HELENA, Mont. – Governor Greg Gianforte today announced the state will expand its efforts to protect the most vulnerable Montanans by entering Phase 1B+ of the state’s vaccine distribution plan on March 8, 2021.

In Phase 1B+, COVID-19 vaccines will be available to Montanans 60 years of age and older and Montanans 16 to 59 years of age with additional qualifying medical conditions like asthma, cystic fibrosis, and liver disease.

He continued, “Montanans have been remarkably patient as we await more supply from the federal government. My priority remains ensuring that every Montanan who wants the vaccine, can get the vaccine. We won’t stop working until that’s accomplished.”

To date, 260,705 doses have been administered in Montana, with more than 200,000 doses administered since launching Phase 1B.

The state will enter Phase 1B+ on March 8. Individuals in Phase 1B+ are encouraged to visit covidvaccine.mt.gov to find information regarding COVID-19 vaccine availability and scheduling in their area.

Negative consequences for both wildlife and humans

Montana Fish, Wildlife and Parks has employed all state residents to refrain from feeding wildlife during this or any season.

With the extreme cold and snow much of Montana experienced recently, it’s easy to take pity on wildlife and put out some food.

Wakeling further explained that artificial feeding can alter natural movements, migrations and concentrations of wildlife. Due to the availability of artificial foods, wildlife may alter migration timing, which may place them at greater risk of mortality when seasonal changes become more extreme.

Artificial feeding also can create unnatural concentrations of wildlife, which may subsequently create greater opportunity for disease transmission and draw in predators, such as mountain lions.

If the artificial food is near human habitation, concentrations of wildlife may result in undesirable effects on vegetation or landscapes and create conflicts among neighboring landowners.

“In short, artificial feeding may create far more challenges for the wildlife we feed or among neighbors who may have different interests in wildlife,” Wakeling said.

And, even with the best intentions, feeding wildlife is illegal.