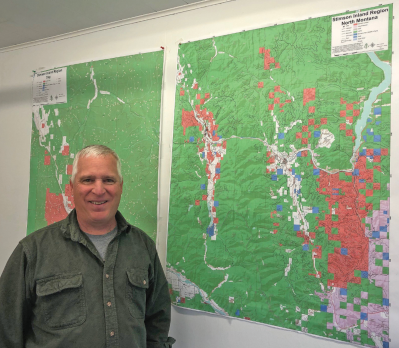 Many locals took note  last year when logs began piling up at the Port Authority. Stimson Lumber Company reopened an office there about a year ago, Forester and Area Woodlands Manger, Bruce Rowland, told The Montanian, but they don’t plan to open a mill right away. The logs were from a fire salvage. They were staged there and then hauled to Idaho.

“It’s possible we could see a mill in five years.” Rowland said. “It’s largely dependent on the Forest Service, and right now it looks optimistic. They are bringing in the right managers.”

Stimson previously owned the mill at the Kootenai Business Park. The same one that burnt a few years back. They bought it from Champion in 1993 and operated it for about ten years until logs became scarce. With no supply to keep it going, the mill closed in 2003, but the company kept about 30,000 acres of land in Lincoln County.

It takes about 40 to 50 years for a crop of trees to grow, so it takes a lot of land to keep a mill in operation. A steady flow of logs from both public and private lands would be needed, Rowland said.

In 2016 Stimson’s  Lincoln County holdings began to grow after Plum Creek, a major timberland owner in the area, merged with Weyerhaeuser.

“Weyerhaeuser,” Rowland said, “has been a willing seller.”

Stimson now owns about 95,000 acres in Lincoln County and they will continue to look for opportunities to buy more land if it fits into their business plan. The Libby office was reopened with Rowland and three other fulltime foresters to manage the company’s growing timberland holdings, and they are working to rehabilitate the lands for productivity. “We’re getting the right tree on the right lands to keep the next generation of loggers going,” Rowland told The Montanian.

All four employees moved to the area and now live within 20 miles of their office located at the Port Authority. In addition, Stimson has been hiring local contractors for logging, thinning and road maintenance activities contributing to our local economy. They work to support local efforts which has included donating the logs for Kootenai Country Montana’s International Chainsaw Carving Championship event that was held in downtown Libby last month.

This plan ensures that local timberlands remain working forests and that they also remain open and assessible for public use. Even if the lands were sold, the conservation easement would remain attached. “We are part of the community. We want to stay here and provide these lands for public use for generations,” said Rowland.

Annually Stimson meets with Fish, Wildlife and Parks about their lands and the status of their conservation easements. The meetings are open to the public and anyone interested is welcome to attend. The public is also welcome to reach out to Rowland with questions. The Stimson office is open Monday through Friday from 7 a.m. until 5 p.m., or you can visit their website at stimsonlumber.com for company information and recreational use policies on their land holdings.

Stimson is a Sustainable Forestry Initiative (SFI) certified company which means they manage their land based on a set of principles to protect water, soils, fish and wildlife. They are subject to a third party audit every other year to ensure compliance. This, Rowland said, is why gates are sometimes closed: to protect the resources. “We don’t intend to close anymore gates,” he said.

Even behind gates walk in recreation is welcome.

On Tuesday, Oct. 8 Montana’s Governor, Steve Bullock, ordained a 120-day ban on the sale of flavored vaping products regardless of whether they contain nicotine and THC. The emergency rules will take full effect on Tuesday, Oct. 22. The ban does not require existing retailers to destroy their products, but they will not be permitted to sell them.

DPHHS and the governor cite the recent VAPI outbreak as a public health crisis that could pose an imminent threat to public health, safety, or welfare.

As of Oct. 10, this outbreak includes 1,299 confirmed and probable cases, and 26 deaths linked to e-cigarette use in 48 states and one U.S. territory.

Montana has had two confirmed cases of VAPI, one individual in their 30s from Yellowstone County, and a second in their 20s from Gallatin County. The individuals affected report using nicotine, THC, and flavor containing vaping products.

Half of those affected by VAPI are under 25 years old. People are using an array of products and no one product, brand or substance has been linked to all of the VAPI cases, but according to the Center for Disease Control (CDC), most VAPI patients report a history of using THC-containing products.

The latest national and regional findings suggest that products containing THC play a role in the outbreak.

There are many ongoing investigations pertaining to vaping related lung illnesses, and recent studies reveal that Vitamin E acetate in cannabis-containing vape product may be the culprit.

Vitamin E is most commonly used in skin care products and dietary substances and it is completely safe for topical use and consumption; but when used as an inhalant, the vitamin is raising red flags.

It is believed Vitamin E has mostly been used as a vape cartridge additive and it is a popular new diluent thickener found in illicit market THC vape cartridges. In New York, Vitamin E acetate is now “a key focus” of the state health department’s investigation into the recent and vast lung illnesses.

According to Montana DPHHS, e-cigarette use is an epidemic among Montana youth. E-cigarettes are now the most commonly used tobacco product among high school students.

From another perspective, United Vapes of America, stated that nearly four percent of American adults or more than nine million people enjoy e-cigarettes safely on a regular basis.

The American Vaping Association in a press release responded to Governor Bullock’s decision calling it “rash and unfounded.”

They wrote, “This is yet another unfortunate snap decision where regulators have whole-heartedly accepted the rhetoric of the anti-vaping activists who have been using scare tactics instead of science to push for bans. These bans rob the millions of smokers who are trying quit, of their ability to do so, forcing them to turn back to cigarettes. Public Health England and the Royal College of Physicians have both estimated vaping to be at least 95% less harmful than smoking. Estimates from John Dunham & Associates indicate that there are more than 50 vapor-focused businesses throughout Montana  that could be shut down by this senseless ban.”

One Libby business notifies customers of the flavor ban with new signs. Photo by Zach McNew, The Montanian.

The Libby High School golf season came to an end at King Ranch Golf Club on Thursday in the wind, rain and cold. With difficult conditions, the Logger golf team battled hard. The tournament was moved up because of the threat of snow on Saturday.

Trey Thompson missed the cut to go to state by just two strokes. The girls were unable to attend as sickness kept them back in Libby.

This year’s season showed good improvement with very positive attitudes, in part to great senior leadership with Trey Thompson and Alex Svendsbye. The kids did a nice job representing Libby and with two freshmen, two sophomores, and two juniors returning we look forward to next season.