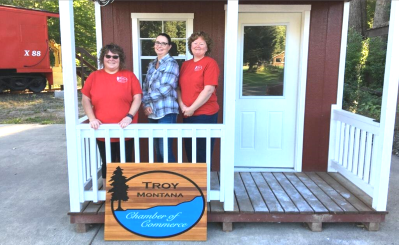 The tourism grant program awards funds to projects that strengthen Montana’s economy through the development and enhancement of the state’s tourism and recreation industry. Funds are awarded annually to projects that develop and enhance tourism and recreation products that have the potential to increase non-resident visitation. The tourism grant program is funded by the 4% lodging facility use tax, commonly known as the “bed tax,” which is collected from guests of hotels, motels, bed and breakfasts, guest ranches, resorts and campgrounds.

Troy’s Chamber of Commerce used the $4,000 grant to increase advertising and pay for sanitation at this years Fourth of July event. The Troy Chamber would like to express a very special thank you to all of the volunteers who made Troy’s 2019 Old Fashioned Fourth of July a big success.

In addition to improving the event by advertising to communities outside of Troy, the grant will be a huge help recovering some of the increasing costs of holding the event.

Troy Chamber’s Treasurer, Sharee Miller, told The Montanian, “In years past the event cost and income has been almost even. This year we faced many cost increases from insurance to fireworks and the grant monies kept us in the black.”

The Troy Chamber has new faces and a renewed commitment to bringing tourism and business to Troy.

Miller further stated, “In the past eight months we have undergone some significant board member changes including the resignation of long time President, Jody Peterson in July. It’s a whole new board now and we are working hard to try to bring economic health  to our community and value to our members.”

The efforts to improve led the Troy’s Chamber to purchase an office building in March, and the board has been working with volunteers and businesses to keep its doors open to the public ever since.

Troy Chamber’s President, Susie Taylor said, “We are hopeful to have the grand opening event at the end of September.”

The Chamber has also begun a bi-monthly newsletter that is sent to all of  their members. The make regular updates to their community events calendar at www.troymtchamber.org, and they host quarterly Business after Business member meetings. A note on upcoming events includes the Troy Farmers Market Apple Festival that will be held on Friday, Sept. 27.

The next Business after Business meeting will be held at the Silver Spur on Wednesday, Sept. 25 at 6p.m. Robin Benson will address reconnecting Libby and Troy, and Shawna Kelsey will give a broadband update.

The Chamber would also like to remind the communities that school is back in session and to please drive carefully.

The Troy Chamber of Commerce is seeking a qualified candidate with a strong desire to serve to fill the position of Vice President. This person will work in close coordination with the Chamber President as the official spokesperson representing business and professional leaders in activities and serving as a liaison between the Chamber and external entities. The VP shall in the absence of the President, preside at Chamber meetings.  If interested, please submit a letter of interest to PO Box 3005, Troy, MT 59935. If you are interested in volunteering for the Troy Chamber or the Chamber Board of Directors please contact Susie Taylor at 295-1064.

Left: Brian Sharp humbly thanks everyone in attendance.  Right: A veterans group representative, Brian’s wife, Amy, and Amy’s grandmother stand at the podium during Saturday’s event. Photos by Brian Baxter, The Montanian. 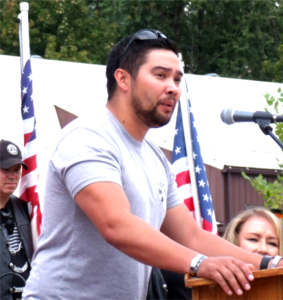 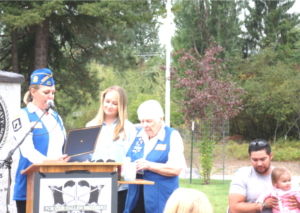 Citizens lined the streets and the local Austin Reedy American Legion and Veteran’s of Foreign Wars groups passed out flags as Green Beret, Brian Sharp, was welcomed home with an appreciative motorcade from Minearl Ave. to Riverfront Park where a ceremony in his honor was held on Saturday, Sept. 7.

Behind them was a backdrop of Scott Lennard’s bronze sculpture. The stone monument has the saying “Continue the Fight, Leave No One Behind” inscribed.

Sharp’s wife Amy thanked all those who had been showing up since her husband was in Walter Reed Army Hospital. She said it had not been easy, but that they appreciated the support, gifts, and donations.

A crowd of  approximately 300 stood as spartan warrior Sharp said, “Thanks to all. I know that I can’t imagine all of these people here for me, but thanks for being here for all whom have served.”

Sharp was humble and appreciative, both signs of a true hero. The 33 year old Libby native was deployed to Afghanistan and he was wounded when his unit was ambushed last March. Sharp served two tours in Afghanistan and by his faith and determination, he is working on a full recovery. Sharp’s family members have also served in the armed forces.

At the highest levels of artistic achievement, the process of judging what is better or the best becomes a complex blending of objective criteria and subjective, personal experience.

Olympic sports such as  diving and figure skating, or creative pursuits like dancing, photography and sculpture, to be considered great, have to include both extreme technical skill and something called the “wow factor.”

Founding member and key organizer of our Kootenai Country Montana (KCM) International Chainsaw Carving Championship, Steve Backus, put it this way, “It doesn’t have to be perfect, but it has to be powerful.”

“We do have specific judging criteria,” explained event organizer, Troy Douthit, “but it helps if they have a feel for it.”

This year, event organizers have entrusted Rio Dejarnette, Jen Watson, Todd Berget and district Judge Matt Cuff with the weighty responsiblity. The organizers of the three-day competition took the opportunity to bring in top people like Jen Watson and Rio Dejarnette.

Backus told the Montanian, “They have earned respect in the field, and we are tapping into the carvers brain trust,  and of course, each judge has the option of changing it around. Judging for Woman’s Olympic ice skating has nothing on chainsaw carving!”

Organizers of the third annual International Chainsaw Carving Championship, have hammered out five effective judging criteria, starting with; context/clarity of intent, effectiveness of design, use of material, difficulty, and craftmanship.

Then, each judge gets to weigh in on the “wow factor.” What piece connects most strongly with their soul?

Everyone has an emotional reaction to powerful beauty, and so organizers of the 2019 Chainsaw Carving Championship had the insight to invite District Judge, Matt Cuffe to be a judge this year.

“ Having a non-professional brings another perspective,” Cuffe told The Montanian.  “Everybody has their own styles and this is a good community event, I really enjoy it!”

Also lending their experience and expertise are carvers Rio DeJarnette and Jen Watson.

This will be the third time carver Jen Watson has come to Libby to serve as a judge for the competition. Based on the beautiful coast of Maine, Watson has been carving since 1999 when she, “met and fell in love with a carver and became their agent,” Watson told The Montanian with a laugh.

Although she has helped produce competitions, Watson is more of an exhibition carver than a competitive carver, appearing  at festivals big and small with The Chainsaw Chix, an all-woman chainsaw carving performance troupe.

As a judge, Watson says she will be looking for clean lines, attention to detail and realism.

“I’ll be looking to see how precisely the carvers can convey their emotional intent, the connection between their brain and heart,” Watson explained, “These sculptures are not stagnant pieces. I will be looking for the wow factor.”

Watson is looking forward to returning to Libby. “ These carvers are the best in their class, and Libby has really done an amazing job with this event,” she said.

California carver, Rio Dejarnette, will also be back as a judge this year, after loosing his home and studio to the Woolsey fire last November.

“I love Libby and am looking forward to returning,” he said. “Libby is full of  dynamic people, and this is a very high end competition. The folks of Libby are lucky to have it!”

Also returning as a judge this year is local sculptor Todd Berget. Although Berget is primarily known for his large metal sculptures, including the many magnificent eagles that grace Libby and so many other places, Berget has done a little bit of chainsaw carving at the local Sasquatch  festival.

“After doing it, I have so much respect for these artists, I look at these pieces people create and I just say wow,” Berget told The Montanian. “I think more people should try it. We all try to judge on the same palette/criteria. And I will be especially looking for the artist’s use of negative space.”

In addition to the professional judging, the competition will have a Peoples Choice award.

“To help avoid multiple voting, we are encouraging everyone who buys a raffle ticket to use it to cast a vote for their favorite carver,” Doutnit explained. “Just vote for your favorite, there is no criteria other than that.”

“This is an elite contest, and it attracts the best in the world, and we chose our judges carefully. We want our judges to be a balance of local and national folks, who can bring an impartial, fair eye to the competition,” Doutnit said,  “The whole point is to bring folks to Libby, and get them coming back to see the sights, we are excited about sharing the weekend with Nordicfest this year and will be sending people up to the Memorial Center. Our goal is to make this the best chainsaw carving competition in the world.