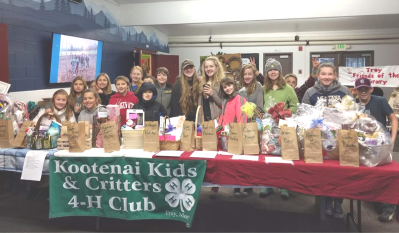 “Children are the world’s most valuable resource and its best hope for the future.”

These sentiments were spoken by U.S. President John F. Kennedy. President Kennedy was the youngest man ever elected president, at age 43, and we lost him much too early at age 46 almost exactly 56 years ago, on Nov. 22, 1963. His wise words live on for us to contemplate and put into action.

On Saturday, Dec. 7, the Troy Kootenai Kids & Critters 4-H Club will hold its annual Christmas Bazaar at W.F. Morrison Elementary School, located at 501 East Kalispell Ave. in Troy. The event will be held from 9 a.m. until 4 p.m.

4-H Clubs believe that true leaders aren’t born, they’re grown. Their motto is: To Make the Best Better. Their four leaf clover emblem is an important mark within our country’s history. It has been granted special status in a category similar to the Presidential Seal and the Olympic Emblem. 4-H members pledge their Heads to clearer thinking, decision making, planning, organizing, problem solving and using knowledge throughout life. They pledge their Hearts for strong personal values, positive self-concept, concern for others, cooperation and communication. Their Hands are pledged for volunteering, community service, preparing for the world of work, science, and technology literacy, and useful skills. And members promise Health to healthy lifestyles, character, ethics, stress management, and disease prevention.

The Montana State University Extension Service is intricately connected with 4-H. In Lincoln County, over 161 members belong to ten clubs that are situated in Libby, Eureka, Troy, Fortine, and Trego. Montana 4-H desires to grow young leaders from 4-H membership, and to accomplish this they also coordinate Leader Training Sessions to help adult and teen leaders. All leaders and members are taught respect, politeness, kindness, optimism, and communication. Workshops emphasize dealing with different ages and stages, concerning young Cloverbuds (aged 5-7 years) and young adult members and Seniors (aged 8-19 years) and navigating life’s ups and downs with good character traits and developing others. The goals of 4-H are centered on developing citizenship, leadership, responsibility, and life skills. If you would like to talk with the M.S.U. Extension Office about local 4-H Clubs you can call Svea Jorgenen at 406-296-9019 or 888-713-3471, or email svea.jorgenen@montana.edu.

Club leader Jennifer Johnson told The Montanian, some interesting things that are occurring this year include a blacksmith set up outside showing off his talents. He will have handmade forged items and such. The club also has several raffle baskets available to choose from. “Local businesses have really supported our club with their generous donations for the raffle baskets,” Johnson said.

At this years event, Troy Friends of the Library will host a reading corner for kids to enjoy  while their parents are shopping. There will also be face painting, and  many creative vendors including Yeti Chocolates freshly handmade and designed by Willow Merritt, polished rock and petrified wood jewelry and paperweights made by  Steve and Patty Johnson. WIM Novelties is a Troy High School student run business new to the school system this year. They will be selling unique Montana designed ornaments. Crystal Webly will be at the bazaar with her specialty sweatshirts, long sleeved T-shirts, and other Yaak Attack Merchandise. Some of the other vendors attending will be Scentsy, Avon, Pampered Chef, Thirty One, and Origami Owl.

Johnson said, “This event is our main fund raiser for our club. The money raised goes to fund our club’s operations and to send our kids to camps, leadership opportunities, and statewide competitions.”

Visitors to the bazaar will have an opportunity to win door prizes too. The 4-H bazaar has been going on for many years.

“Our club would like to thank all the local businesses for your generous donations in all aspects of this event. Also, we would like to say thank you to all of our communities because without you coming and showing your support, we could not have this event,” said Johnson.

If folks have questions about the Christmas Bazaar or about local 4-H, please contact Guy or Jennifer Johnson at 295-5464, or email jennee1977@gmail.com.

“No one diets on Thanksgiving. What we’re really talking about is a wonderful day set aside on the fourth Thursday of November when no one diets. I mean, why else would they call it Thanksgiving?”

The Pilgrims who celebrated the first Thanksgiving were primarily Mayflower passengers who either left England and Holland for religious reasons or to work on the ship. They sailed from Plymouth, England and landed at Plymouth in America, but this according to The History Channel, was probably out of pure coincidence since they neither departed from nor landed where they had originally intended. They did not name the American Plymouth, it had been given that name years earlier.

The Mayflower set sail around Aug. 10, 1620 with 102 passengers. Two people died during the 65 day journey and a child named Oceanus was born at sea. Many of the Pilgrims were extremely ill and a large number died during their first year in America but they managed to plant food in the spring and were thankful for their fall harvest as well as their lives.

The event that we Americans commonly call the first Thanksgiving originated as a harvest festival the following year, in 1621. In an account of this feast by pilgrim attendee, Edward Winslow he wrote, “Our harvest being gotten in, our govenor sent four men on fowling, that so we might after a special manner rejoice together after we had gathered the fruits of our labor. They four in one day killed as much fowl as, with a little help beside, served the company almost a week.”

Although the exact time of this feast is not known, James Baker, the Plimoth Plantation vice president of research said the Pilgrims celebrated for three days after their first harvest in 1621 and that the event occurred between Sept. 21, and Nov. 11.

Winslow continued, “At which time, amongst other recreations, we excercised our arms. Many of the Indians coming amongst us, and their greatest King Massasoit, with men whom went out and killed five deer, which we brought to the plantation. And although it be not always so plentiful, yet by the goodness of God, we are so far from want that we often wish you partakers of our plenty.”

According to worldstrides.com, it is believed that out of 50 Pilgrims and 90 Wampanoag Indians in attendance, only five women were present and whether or not turkey was consumed is debatable. Ducks, geese, cranberries and pumpkins probably were served.

Thanksgiving became a national holiday in 1863 by declaration of  President Abraham Lincoln. He was convinced to do so by Mary Joseph Hale, author of the song “Mary Had A Little Lamb,” who also authored numerous Thanksgiving holiday advocacy letters beginning in 1846.

U.S. presidents pardoning turkeys started with JFK and the practice was later formalized by George H.W. Bush in 1989. Harry Truman received a ceremonial turkey from the National Turkey Federation, but he ate his turkey for dinner.

Eating turkey for Thanksgiving became popular after Thanksgiving became a national holiday, in part, because historical accounts of the pilgrims at Plymouth mention hunting wild turkeys. Also, the birds are uniquely American, taste good,  can feed a crowd, and our Founding father, Benjamin Franklin was a fan.

Franklin once wrote, “For my own part I wish the Bald Eagle had not been chosen the Representative of our Country. He is a bird of bad moral Character… For the Truth the Turkey is in Comparison a much more respectable Bird, and withal a true original Native of America… He is besides, though a little vain & silly, a Bird of Courage, and would not hesitate to attack a Grenadier of the British Guards who should presume to invade his Farm yard with a red Coat on.”

Just imagine eating the national bird on Thanksgiving. No, you are not allowed to do so. Bald Eagles are protected and killing one could lead to a $5,000 fine or one year of  imprisonment.

Other than dinner, our country’s two most famous Thanksgiving traditions include football and the Macy’s Thanksgiving Day Parade. NFL Thanksgiving games began as soon as the NFL itself, in 1920. Games are traditionally hosted by the Detroit Lions and Dallas Cowboys. The Macy’s parade started in 1924 and is one of the largest parades in the world. It is held in New York City from 9 a.m. until noon and televised nationally by NBC. Santa’s arrive at the end of the parade marks the beginning of the Christmas season, but even Macy’s sells Christmas items before Thanksgiving. As far as we’re concerned, we’ll worry about the Christmas tree later. For now let’s focus on the poul-try. 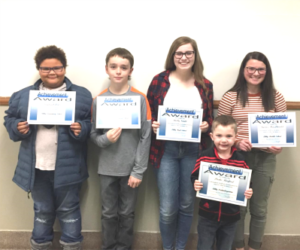 The following students were recognized for their outstanding character that help them be successful citizens at school and will help with their lives as adults too. Their teachers shared some wonderful attributes that make each of these students role models in our classrooms. From left to right: Kayleigh Wills– a third grade student, Brayson Orr– a fifth grade student, Shelby Smith, a senior, Drake Morford a Plummer School student, and Paislee MacDonald– an eighth grade student were recognized by the Libby Public School’s School Board this month. Photo courtesy of Superintendent, Craig Barringer.