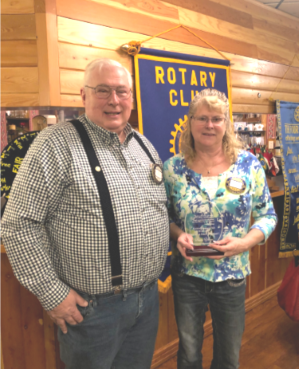 This year’s Rotary Beer and Wine Tasting was held on March 8 at the Memorial Center in Libby. The event raised over $11,000 to support local projects. Tim Whalen, chairman of the planning committee said,  “The wine tasting is our primary fundraiser allowing us to contribute to a number of community projects including, but not limited to the new bathrooms in Fireman’s Park, the kids’ fish pond, book cases and books for Head Start students, scholarships for graduating Libby and Troy seniors, Shakespeare in the Park, and dictionaries for every third grader in Lincoln County.”

The wine tasting has been the Rotary Club of Kootenai Valley’s main fundraiser for a number of years. It started out in the early 1990s, as far as anyone in the club can remember. According to longtime treasurer, Linda Gerard, the earliest “evidence” of Libby’s Rotary Wine Tasting is an old check register from March of 1992.

Gerard said, “The event has grown considerably over the years as has the amount of funds raised. The club truly appreciates the community’s support.”

Susan Yarger, the first woman to join Libby’s Rotary Club (before its name changed to Kootenai Valley), brought up the idea of a wine tasting event to the club after the local woman’s club she was involved in decided to discontinue their wine tasting. Yarger recalls Dr. Rice donating $600 in birthing services, and Dr. Black donating one of his famous mud pies for one of the early wine tasting events. That year, Yarger said, she happened to be pregnant, and even though many didn’t realize it yet, she surprised them by buying Dr. Rice’s donated services.

Gerard said the event has been held at the Venture Inn, Libby’s Elks Lodge, the Ponderosa Room, and then finally at the Memorial Center where it has been held for the last several years.

A number of local Rotarians, past and present,  have played a big role in keeping the event vibrant including Whalen, Kevin Peck, Laurie and Karilyn Duarte, Gary Huntsberger, just to name a few pointed out by Gerard and Yarger.

Karilyn Duarte shared that raising funds for the scholarship program has been a source of inspiration for her ongoing volunteerism. “Once you receive a thank you note from one of these young adults who expresses their appreciation for the funds they receive and how it has benefited their entrance into the world beyond the valley, you will always want to do more,” she said.

For Gary Huntsberger, raising funds for the Rotary Youth Leadership (RYLA) Camp has given him motivation. “We’ve never had a single negative comment from any of the students who attend RYLA, they all love it. It changes their lives,” he said.

The club appreciates all of the local businesses and individuals who donate to support the fundraiser, the volunteers who work the event, and those who attend. This year, for the first time, beer was added, and a larger dinner was too; both were well received and the club looks forward to making continued improvements to enhance interest and enjoyment in the event.