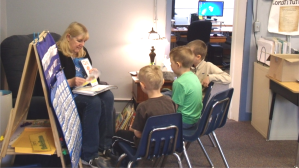 Rose Kraeger Wilson  working with some boys in the Yaak school. Photo by Brian Baxter, The Montanian

Ancient Greek history suggests the torch used in the Olympic Games has it’s roots in Olympia, Greece. The first recorded games occurred in 776 BC. It is said that the original flame was started in a temple constructed by the Greeks in honor of Hera, the powerful queen of the mythological gods. Her shrine stands in an archaeological site where the Greeks first kindled the flame using a type of crucible, or heat resistant container, in which material can be subjected to great heat. This container was positioned facing the sun where the sun’s rays focused and set fire to dry grass and twigs inside of it. The flame was then transferred to the first runner, an athlete of achievement. Transfers then continued to numerous other athletes. Greek legend has it that in this fashion, the flames in a torch literally and symbolically representing energy, heat, and enlightenment are carried throughout Greece, and in latter times, Europe and the world.

Up in Yaak, Montana, there is a most unique one-room schoolhouse where a torch is about to be passed. Rose Kraeger Wilson will retire at the end of this school year and Sabre’ Burson Alderete will take over full time in the fall.

When The Montanian asked Kraeger Wilson about her background and retirement, she shared that she has been a teacher for 30 years. Kraeger Wilson graduated from the University of Idaho in 1989 and then taught many different grade levels over 13 years spent in Rathdrum, Idaho. “While there, I was awarded Teacher of the Year,” she said.

Kraeger Wilson then moved to the Yaak and began her “dream job.” She loves living in the Yaak, and she taught at Yaak School from 2002 until 2006. She missed the camaraderie of working with other teachers though, so she began teaching in Spokane Valley after that. The fifth grade team that she worked with received the Meritorious Service Award for their innovative teaching. “I then taught in Libby for a year to be closer to home and retired for a year before I realized I wasn’t ready for retirement. “When I heard that the Yaak School was looking for a teacher, I came out of retirement and have had the pleasure of teaching two more years,” she said. “I will miss my students smiles and hugs every morning, but it is time to pass the torch to Sabre’ whose passion is to teach in our one-room school.”

Kraeger said that it will be an easy transition since their teaching philosophies are identical. “I can rest assured the students are in good, caring hands.”

The Yaak School was featured in a book called Chasing Time: The Last of Montana’s One-Room Schools. The school has served the community since 1932. It is one of 60 one room schools in Montana, the most of any state in the union. A sister one-room school in Pleasant Valley, west of Kalispell, is the only one left in Flathead County.

Burson Alderete also shared her perspectives with The Montanian. She is originally from Bogata, Texas. She and her husband moved to Montana shortly after they both retired from the Air Force. “One unique thing about me,” she said, “is that not all of my teaching years have been in a traditional public classroom.” She was in the education field in the military for over ten of her 23 year career. After retiring, she knew she wanted to continue teaching. She went to Grand Canyon University and earned a Masters in Special Education. Teaching multiple grade levels at one time is not new to Burson Alderete. As recent as this year, she taught up to 14 fifth through eighth graders at a time. “I enjoy establishing a friendly learning environment in my classroom with high expectations,” she said.

Standing outside the school in mid April, it is relatively quiet. Save the sounds of the rushing spring Yaak River in the distance. Songbirds sing from the tops of the Western larch trees now devoid of needles, but soon to be full of light green foliage. Set alone among the Lodgepole pine, Douglas fir, and the river, a gem of learning shines.

Lynette Wilson, a personal tutor is excited about the transition. She said “Rose is an outstanding teacher who has given so much dimension to our students education. She’ll be so missed in this community.”

Ani Vick, an 11 year old student at the school who loves art and being outdoors also shared her perspective. Vick said, “It’s been great having Miss Rose as a teacher, but Miss Sabre’ is very nice too. I’m very curious what it will be like having Miss Sabre’ as a teacher.”

Kraeger Wilson said “During the interview Sabre’s answers to questions and her experiences were almost identical to mine,” and “It seems we have seamless teaching styles and it will be a smooth transition. Every child is gifted, they just unwrap their packages at different times.”

Burson Alderete added, “All children can learn as long as they know you care and believe in them.”