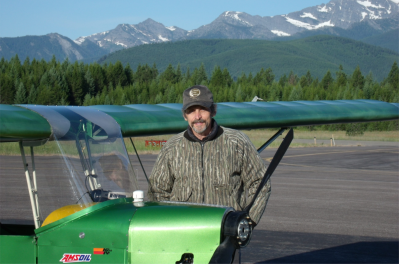 Dawn broke with clear skies for flying on July first. The winds were calm, the cool air invigorating, and the visibility was magnificently portraying the highest Cabinet Mountain peaks. Scenery Mountain still exhibited the semi-barren look of a mountain ravaged in the past by fire. The outline of an Indian Head was distinct. The cirque basin of Treasure showed it’s true form. Bockman, Snowshoe, A Peak, and Bald Eagle Peak still proudly held snow.

As this reporter walked towards the runway at Libby Airport, a smiling Scott Lennard stood next to his forest green Carlson Sparrow light aircraft. Having not seen each other for a spell, we shook hands and both commented on this unbelievably beautiful day.

For those of you who might not know, Lennard  is a multi-talented local citizen. A taxidermist and sculptor, he always finds time and room in his heart to teach and encourage others. Now, he is assisting others as he shares his aviation knowledge and skills with the Young Eagles Rally.

The Sparrow is a one seater, so as Lennard got airborne and I adjusted my camera for a couple of shots, my mind wandered. First to memories of Sky King, an early TV show, then to the filming of the 1989 movie Always, starring Richard Dreyfus, John Goodman, and Holly Hunter. Dreyfus plays the pilot of a fire fighting air tanker battling Montana wildfires, heavy smoke, and tall burning trees. The movie was filmed in our Kootenai Country, and the observation tower still present at Libby Airport was built for filming the scenes at this site.

After a smooth landing, Lennard rolled up near the hangar and we went into the airport office to talk. He has been interested in flying since he was a kid. He attended Wildlife Management school in Michigan, and after many years in Montana decided to take a few lessons at the Bonner’s Ferry, Idaho airport. Lennard continued lessons in Kalispell, Montana, and even took ultralight lessons in Florida. He then bought the kit to build the Carlson Sparrow, and has been flying it for over three years.

Along with pilot Paul Parker of Kalispell Experimental Aircraft Association (EAA) Chapter 102, Lennard will be hosting and instructing a Saturday, July 13,  Young Eagles Rally at Libby’s airport, located on Farm To Market Road.

The event will be held from 8 a.m. until 1 p.m. weather permitting, and children between the ages of 8 and 17 years are welcome to participate.

The Young Eagles program, since beginning in  1992, has provided over two million young people interested in aviation with the opportunity to go flying for free in a general aviation airplane, according to their Facebook page. This program is possible because of the dedication of over 42,000 volunteer pilots like Lennard and Parker. Parental or legal guardian approval and signature are required for participation in the program.

Often Cessna 150 or 172 single turbo prop, four seat, high wing, fixed winged aircraft are used for the flights as they are considered universal trainers and have great safety records.

Lennard told The Montanian, “Having been interested in aviation all my life, I was hoping to inspire young people to be aware that there are many career opportunities these days.”

There are positions available in the military, working for airlines, and as bush pilots in remote locations.

This reporter has flown with both certified fixed wing aircraft and helicopter pilots on a variety of flights performing fire spotting and monitoring, as well as wildlife aerial spotting surveys for Great Blue Heron rookeries, Bald eagle nests, and several flights to ascertain the safety considerations of mountaintop Forest Inventory and Analysis plots.

“Not only can aviation be fun and exciting, but having the discipline to learn any aspect of the field can bring tremendous pride and satisfaction. You will also meet a very interesting and adventurous group of people that will inspire you in many areas of life,” Lennard said about aviation. And the scenery isn’t bad either.