Work meeting discussions also concerned Resolution #2019-764, Regulations for BARSAA Program Funds. These funds require the Bridge and Road Safety and Accountability Account (BARSAA) through the Montana Department of Transportation, to allocate accrued funds to cities, towns, counties, and consolidated city council governments for construction, reconstruction, maintenance, and repair of roads, alleys, bridges, or roads and streets in the above mentioned municipalities, and that these municipalities must match BARSAA funds with $1 of local government funds for each BARSAA $20.

It was resolved at the Aug. 21 City Council meeting to request these funds for paving the corner of Riverside Ave. and 3rd Street, and Mineral Ave. between 3rd and 4th  Streets, once the total cost is assessed.

The entire council was present at the Aug. 21 City Council Meeting. Three new Business License applications were approved. One for Troy Auto Repair Shop to Sam and Blair Shupe; One for Rogue Design FX – Internet Retail to Robin and Jeremy Colyer; and one for Montana Pawn and Feed LLC, to owner Jesse Kidwell. Approved were Resolutions 2019-763, Intent to Cancel General Elections; and Resolution 2019-764, Request for BARSAA Funds. The Budget Transfer for Fiscal Year 2018/2019 was also approved by council vote. There was some discussion over Uncollected Utility Accounts brought up by Treasurer Rebo, and after points brought up by Councilman Ekstedt, the council will look into recovering some of the more recent debts.

Also on the docket was a matter concerning Rosebud Subdivision and a sewer main. Mr. Ken Davis, of Davis Surveying at 125 Highway 2 West in Troy, provided documents of record to the council. On behalf of the City, Maintenance Foreman David Norman discussed the City of Troy position on the current situation. After much discussion involving these two gentlemen and the entire council, it was decided that Mr. Davis and Mr. Norman would both gather information on their respective positions on the issue, and along with the council, would meet again at a latter date, not to exceed a three week time period, and attempt to resolve the issues at hand.

The meeting adjourned at approximately 9:50 p.m.

A new federal financing tool could accelerate investment in Libby!

Opportunity Funds were established by the Tax Cuts and Jobs Act of 2017. The purpose of Opportunity Funds is to spur economic development and job creation in distressed communities by making it more appealing to invest in such places. More specifically, the program promotes the investing of capital gains into distressed communities. Those capital gains receive significant tax incentives, if the funds are invested into projects located in distressed census tracts. The federal government dictates each state to qualify up to 25 census tracts. The Kootenai River Development Council applied to qualify the Libby census tract (Census Tract 30053000200), and the State of Montana approved Libby as a certified Opportunity Zone.

This is a young program, but projects throughout Montana are successfully using Opportunity Zone Funds. The Treasury Department and Internal Revenue Service continue to provide legal guidance on the new incentives, and it is important to work with an experienced CPA on the documentation and eligibility issues. Please contact Tina Oliphant (406-293-8406), if you have interest in learning more about this subject. 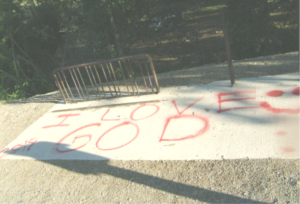 Someone scattered the parking lot of the Kootenai Business Park with various graffiti last week. An investigation is currently underway. If you have information that may lead to the identification and capture of the culprit, please contact the Lincoln County Sherriff Office. Photos by Moira Blazi, The Montanian