Northwest MT Lookout Association at Cabinet Mountain Brewing and Beyond 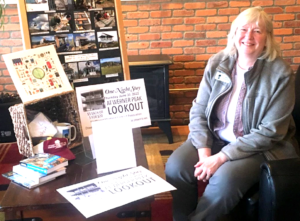 The Northwest Montana Lookout Association is a nonprofit dedicated to the maintenance and repair of fire lookouts and structures. Every Thursday during the month of March, Cabinet Mountain Brewing has been hosting a Brews for Benefits to generate funds for this great organization.

March 31 is the last opportunity to have a brew and join their raffle to support the efforts of the board and volunteers who work to keep these historic lookouts up to snuff.

In Lincoln County there are 6 lookouts listed as projects with the association, including Northwest peaks, Robinson, Big Creek Baldy, Big Swede, McGuire, and Mount Wam. Of all the lookouts within the northwest of Montana, about one third are staffed, one third rented, and one third there to enjoy. Star Peak, located outside Heron, Montana, was the first lookout to be staffed in 1906, and many summits, such as Crimson Peak in the Bob Marshall Wilderness, are still topped with foundations of abandoned towers. Those in use today have seasonal staff who reside at the lookout and spend their time spotting, calling in fires, and aiding in communications between organizations, the Forest Service, and recreationists.

In the summer of 2012, Chuck Manning and his son volunteered at Firefighter lookout, noting a significant need for maintenance. Due to the harsh weather conditions and intense temperature in all seasons, unmanaged lookouts fall into disrepair, and the Forest Service doesn’t have enough time or funding to address the necessary repairs for all the lookouts in this area. Starting that summer, Manning, now a current board member, met with employees of the forest service: Leif Haugen, a fire lookout, and Deb Starling, the then district ranger at Spotted Bear Ranger Station, to make a plan for creating the association. They agreed to partner and in 2013, the association was founded, with a mission stating they are “Dedicated to the preservation of forest fire lookouts in Northwestern Montana.”

The association operates with a committed group of volunteers on the board and in the field working to restore the structures once the winter snows have melted. There are many groups involved such as federal and state agencies, like the DNRC and the U.S. Forest Service. The group supplies initial assessments of lookouts, volunteer coordination, and skilled labor to implement necessary projects to restore these pieces of history.

Haugen said “What they are doing in the Kootenai is outstanding, and their work helps keep those lookouts useful.”

Starling, now a board member, said “Lookouts play a vital role in the landscape regardless of ownership. They are open to everyone and anyone, and are just a really fun experience.”

Current projects include Star Peak, Big Creek Baldy, Meadow Peak, Mount Wam, McGuire Mountain, and an upcoming assessment for Norwest Peak. Volunteers can sign up for trips lasting between 2-7 days, and are typically focused on carpentry, roofing, and general maintenance.

Ways to get involved include joining the organization, signing up for their newsletter, and attending the Brews for Benefits this Thursday. All volunteer opportunities are full for this summer, but they open up in the first part of March, so put it on your 2023 calendars. More information is available at their website https://www.nwmt-ffla.org/, and Manning says feel free to message them with any questions.

When asked why the lookouts are so important, Manning replied, “We must be kind to the environment, and lookouts are a part of the landscape.” He wishes to “take care of the land so others can enjoy the same things in the backcountry.”

Within the group there is a strong ethic of leave-no-trace, and pack it in, pack it out. It takes a lot of effort and time to maintain these pieces of history, and the structures deserve respect.

Manning asks visitors to “Please close it up as you found it. If you do use them, secure them, otherwise the elements will be harsh to the interior and exterior.”

When asked what their favorite lookout was, Starling replied that she loved Big Swede, and Manning replied that he liked Jumbo lookout in the Bob Marshall Wilderness. He added, “There’s just nothing more exciting than being on a lookout with a thunderstorm and the sound of lightning rods.”

So come to Cabinet Mountain Brewing this Thursday, March 31, to support a great organization and get raffle tickets for an overnight at Warner Peak or a special Lookout gift basket. 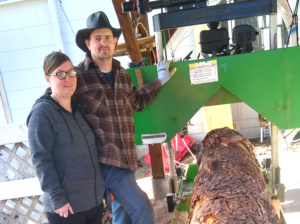 About a year ago, Josh Byers started to mill some logs he had cut to fix up his house. Right on Highway 2 , just east of Troy, Byers activities began to draw attention.

“I was just cutting the lumber I needed, and giving away the rest when people kept coming by saying ‘I’ll buy that from you’,” he told the Montanian with a grin.

Troy mayor Chuck Ekstedt, who lives across the street told Bryers he should get a business license and start selling. So that is exactly what he did, opening Rustic Charm Millwork.

Now Bryers and his partner, Coleen Hicks, sell every board they make, and the demand is only growing. One reason is Byers prices, which are well below average retail costs. For example, One of their 8ft long two by fours, which, generally, these days go for 10-12 bucks at a local lumberyard, is only $4.17 at Rustic Charm. This is because Byers  uses mostly wood he has harvested himself.

“ I don’t mind buying logs from people,” he explained, “but, I can’t pay what the mill would pay for  them, that’s how I keep my prices so low.”

Although he expects he will “… ..eventually run out of cheap wood, I plan to keep going as long as I can.”

Come check out what is available, as it changes every day, and drive away with  some bargain material for your spring projects.  They  are located at 711 E Missoula Ave (Highway 2) in Troy , or call 406 290-3446 for more information.