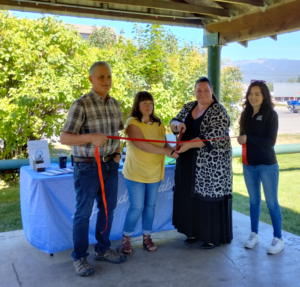 On Tuesday August 30th at the Libby Fireman’s Park the LOR Foundation officially joined the Libby Chamber of Commerce as a new member.

The LOR Foundation supports projects that can have an immediate impact.

“Our work focuses on solutions that improve quality of life across a broad range of issues—the economy, education, engagement, the environment, health, housing, transportation, and water.”

As of June 2022 the LOR Foundation has brought in 45k in grants for our area.

If you have and idea to help the Libby Community or for more information contact Tabitha Viergutz at 406-250-5218.

On Easter Sunday Rotarians from Libby and Kalispell, along with the son of one of the Rotarians, took time away from the primary purpose of their trip to Guatemala to visit a rural elementary school.  The original purpose of the trip was to visit three communities where, working with the support of The Rotary Foundation and the Rotary District in Montana, two water projects were under construction, one approaching completion and the other midway through construction.  The third community was seeking our assistance to help with their water situation.  But now, here we are on Easter Sunday visiting a school where we were greeted by the school principal, several teachers, the mayor and other community leaders.

In Guatemala it is the responsibility of the community to construct the school building, after which the government will pay the salary of the teachers, but impoverished rural communities have neither the financial resources nor the expertise to undertake a project of this magnitude.  With classes currently being held in hallways due to over crowding and with an engineering estimate of $24,000 to construct two classrooms and two additional toilets they were seeking our assistance.  I turned to my friend Gerardo from the Rotary Club of Mazatenango and asked:  “If we do this will you manage the project?”  He answered in the affirmative.  I looked at my fellow Rotarians and almost in unison we said: “Let’s do this!”  A new project was born.

The following day, after visiting the nearly completed Pasac water project, I was approached by the Pasac community leaders. “We would like for you to visit our school.”

Constructed nearly fifty years ago the school had several safety issues, a leaking roof, and some structural problems.  The community had raised most of the money for the project but they were still $10,000 short.  Could we help?  Before I could inform Miguel that, unfortunately, we had already committed to another project the non-Rotarian who accompanied us spoke up:  “If Rotary will fund the other project, I will fund this one”.

Fast forward 5 months and a total of $36,000 has been raised, enough to fund both projects.  Construction has begun on both projects with completion expected within three months.