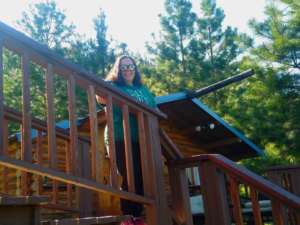 Cindy Stretz, owner at Whiskey Ridge Guest Cabins, greets her guests at one of the “Cute little guest cabins just outside of Troy. Quiet

surroundings. Not too fancy, not too expensive. Just a nice place to relax after a day of seeing the sights. (Photo by Moira Blazi)

Growing up in northern Illinois and Florida, Cindy Stretz says she “always loved the mountains.” So, when she was offered a job in Aspen, Colorado, she jumped at the chance to live in the
Rockies. She quit her bookkeeping job
in Florida and moved, only to find that Aspen was a bit too expensive. “I had an idea of the cabin I wanted in my head” Stretz recalled.

When she happened upon the Whisky Ridge property for sale in Troy, she followed her intuition and bought the property sight unseen. “The property had just gone on the market, and
lots of people were looking. There were lots of pictures on-line,” Stretz told the
Montanian. She made a low-ball offer and it was accepted, then when she came to troy and saw the property she had purchased, she was thrilled. “When I saw this place, it was love at first sight. Once something feels right, it is right.”

The main house on the property was in fantastic condition and the
two cabins only needed some minor improvements and a bit of furnishing. Stretz built bunks and fixed a sink. She put in a fire pit and built a chicken coop and a duck house. She even brought in some bees, utilizing her prior bee-keeping experience. Then she listed the two cabins with Air B&B, VRBO, and HIPCAMP. Right away, both were booked.

Whiskey Ridge is just one short mile from downtown Troy, but when there it truly feels like you are deep
in the woods. There are two cabins available for guests, one with full
electric and water, including a bathroom, and a smaller cabin with full
electric but no indoor plumbing.
Though Stretz plans to add a bathroom to a partially finished storage room to accommodate the guests staying in the smaller cabin which is wonderfully priced at only $40 per night.

Stretz told the Montanian that she is thinking of raising the price on the larger cabin, the one with the more modern conveniences to maybe $60
per night, although when the Montanian visited it was still a steal at only $50. Both cabins have comfy beds, full Wi-Fi, and guests are encouraged to cook on the grills provided or on the fire out back.

With the additions of ducks,
chickens, and bees, the small rental compound will become even more fun, interesting, and self-sufficient while still offering a magnificent view of the Yaak mountains and the serenity of the forest. Stretz is toying with the idea of selling locally made crafts as well.

As a single woman who is new to the area, Stretz has encountered some expected negativity. “One of my neighbors told me she gives me a year,” she recalled with a laugh. “Well, that was over a year ago and I’m still here. In fact, I’m just getting started.”

I’ve always wanted to have a
cabin,” Stretz added. Now she has three.

For more information on Whiskey Ridge Guest Cabins, please call
904-679-2027, or look for them online. 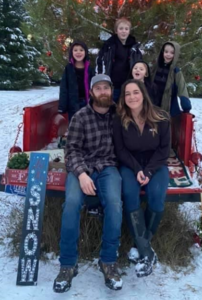 Troy City Council convened on Wednesday, May 19, with Mayor Carr, council members TJ Boswell, Chuck Ekstedt, and Shawna Kelsey attending. City Clerk Tracy Rebo also attended, but council woman Crystal Denton was unable to attend. A diverse and productive meeting began at seven p.m. with the Pledge of Allegiance. Mitch Walters of the John Birch Society began with sharing information about the group. Walters runs the local chapter which has 25 members in the Troy and Libby area. The group is now meeting at the Libby Mercantile every other Thursday. The JBS is set up to help the government do their jobs. Walters gave a description and some background of the society, which was established in 1958 by John Birch.

A new business license application was approved for Kootenai River Graphics & Designs whose owner, Brittany Murphy, gave a brief description of her home business. Representatives from ITC Service Group, a telecommunications entity, were unable to attend due to currently being out of state. Bear & Croc (Scotchman’s Coffee) owners Robynne Gibaud and Dustin Hoffman also could not attend but asked their application for a new business be set aside until they are able to return to Troy. The cleaning contract with the City of Troy was extended one year for CC Cleaning. Also, the Software Licensing Agreement with Secure Warrant was reviewed by the council. The mayor reviewed the agreement and a motion to approve was carried. All departmental reports were approved, and the meeting was adjourned.

Brittany Murphy Schrader of Kootenai River Graphics & Design then took some time to speak with The Montanian. “I’ve always had a creative side, anytime the opportunity presented itself to be crafty and creative I would take it without a second thought.” Murphy had been seeing advertisements about vinyl cutting machines and thought the possibilities to be seemingly endless. She researched every aspect of the machines and learned the programs for operation before she even had access to a machine. She had showed her husband information about the machines and told him, “I can do this, I want to do this.” He then bought his wife her first machine for Christmas, and it has opened the gates to a whole other world.

“Right now, I’m in the process of making Fourth of July shirts to be sold here in Troy,” Murphy shared. “Of course, I can’t do it all alone. I’m thankful to have my husband, my sister Jamie, and my kids helping out.”

Murphy’s focus right now is clothing and decals. Though she will be expanding her horizons working with lettering, intricate designs, and more. “I love when someone shares their thoughts on a design with me,” said Murphy. “I can see the creativity flowing through their eyes and everyone I’ve worked with loves to play a part with helping with the design.”

Give Bri Murphy Schrader your ideas for your design and see what she can whip up for you this summer. Kootenai River Graphics is located at 275 Riverside Avenue in Troy and can be reached by calling 334-9765, by email at kootenairivergraphicsdesigns@gmail.com, or by mail at PO Box 1024, Troy,