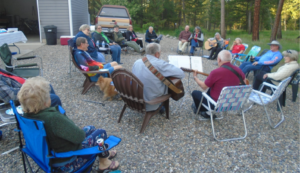 and good fellowship with the St. Joseph’s bible study group this past Spring. (Courtesy Photo)

Something’s cooking at St Joseph’s Church these days and it’s not just hotdogs. In the fall of 2019, the soft-spoken pastor, Father Richard Kluk, suggested to relatively new parishioners, Brian and Laurie Walsh to start a parish bible study. The couple had been active in ministry in the Diocese of Phoenix from 1987 to 2018 and were eager to take on the challenge. Their goals were to cooperate with the Holy Spirit to find excellent material and to establish an enthusiastic team with whom to collaborate and move forward. The initial study authored by Dr. Edward Sri on the life of Jesus Mary and Jesus primarily based in the book of Luke was followed by Jeff Cavin’s extensive work in the Book of Revelation.

The mission was well on its way, but as with any Godly endeavor, not without challenges! Enter COVID-19. It was about this time that the wildly popular YouTube series “The Chosen” was beginning to run. The series was purchased
to show once the Diocese of Helena opened the door to limited parish gatherings. Small groups also gathered to view “Presence,” an excellent series on the Holy Communion. People were inspired by both series and soon, the parishioners were challenged to chip in for a large screen TV. Within a day, the funds were there.

Employing every precaution, including spacing, masks and individually pre-wrapped snacks, the small group began meeting in the parish hall once again. But another challenge was about to present itself. The hall furnace died! Things looked bleak indeed without the parish funds on hand to repair it. But
not for this growing group. Neil and Rhea Bernardy began hauling in several large space heaters every Sunday as did the Walshes and Elijah Purdy.  Attendees wore winter coats to every meeting, and nothing seemed to dampen their spirits.

Within the first year, a leadership team of twelve were solidly on board. Study sessions had anywhere from 20 to 30 parishioners (coats and all) showing up. More important than the numbers, those who were coming spoke of a deeper appreciation for the Holy Spirit in their lives and a greater sense of “family”
continuing to grow between attendees.

The group who has been taking the summer off, but warmly welcomes
anyone interested in joining them this fall. All faiths – denominations or none – are welcome to attend.

Krisign, her brother Elijah, and friends Emmy, Rona, and Henry Hayven were ready to take on the staining and painting of almost one hundred birdhouses. “I was hoping to maybe get a badge out of it,” Huff said. “But even if it is just for
decoration, it’s still worth it. Because it helps nature.” 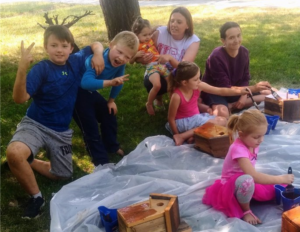 With the help of community  commissioned back in town, the lofty proposal to

Neighborhood for many seasons to come. (Photo by Moira Blazi)