As the federally funded food box distributions in Libby wrapped up this past Thursday, volunteers who had showed up to distribute boxes each week through every type of weather and
unexpected glitch in
delivery time celebrated
the honor of working with one another to serve their community. 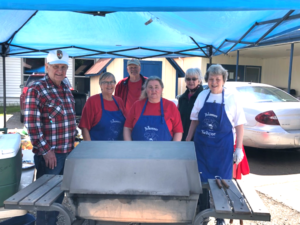 On Friday, May 28,
as part of the “Adopt a School” program of the Sons of Norway, the local chapter purchased and provided an entire picnic meal for all students at the Kootenai Valley Christian School in Libby.

In years past, Norhaven had provided chips on the final day of school. But this year, they felt a little something extra was in order. 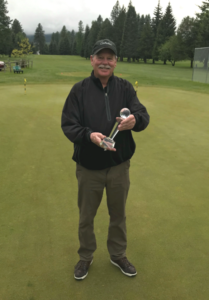 Pictured right: Mike Managhan with his trophy from the Ben Graham Memorial
Tournament at Cabinet View Golf Club in
Libby. Managhan finished with a +8 on
Sunday afternoon, May 23.

In all there were 57 men and 6 women who played in the two day tournament in less than ideal conditions to raise monies for the Libby Middle and High School Golf programs.

The women’s winner for the weekend was Bobbie Lacklen who ended with a +32. 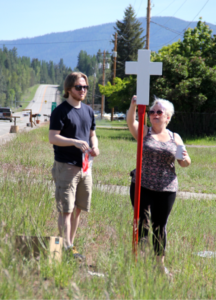 Volunteers were spotted along Hwy 2 West in Libby on Sunday evening, May 30, working to repaint one of the highway fatality markers in traditional preparation for Memorial Day.

The Montana American Legion White Cross Highway Fatality Marker Program in 1953. The unique idea of marking fatal traffic accident sites with a white cross was the brainchild of Floyd Eaheart, a member of Hellgate Post #27 in Missoula after 6 lives were lost in that area over the 1952 Labor Day Holiday. The safety program started out as a county and later district project for the Missoula American Legion Post. However, the idea was so good that it was soon adopted as a statewide program. 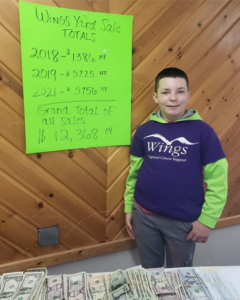 For the third year in a row, Hunter Rooney has been raising funds for Wings Regional Cancer Support through an annual community rummage sale. Adding to the $6,611.56 raised in 2018 & 2019, donations totaling another $5,756.58 came in this year. “He is one happy kid! Thank you to everyone who
has donated to Hunter’s yard sales over the years,” shared Rooney’s mom.  (Courtesy Photo)

On the way to the State Softball Tournament in Butte this past weekend, Head Coach Dean Thompson had a
special surprise for the Lady Loggers—a pre-tournament practice on Grizzly field in Missoula. (Courtesy Photo)
Loggers Softball team