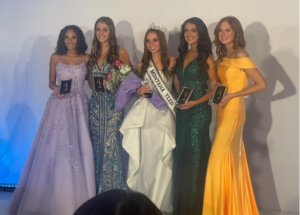 A big part of the pageant system is having a platform. Last time, I just picked one because it was mandatory to have one and so I picked human trafficking. After I did some research and got more educated on the topic, I realized that it is something I am actually extremely interested in and this past summer I realized it is what I want to pursue as a career in the future.

I would like to go to college and get my business and law degree or my criminology degree and my goal is after I graduate to open my own business that would be sort of a rehabilitation and rebuilding site for women who have gone through the experience of human trafficking. Basically, I would like to help them to find themselves again and be re-entered into society whenever they are ready to do so.

Without the pageant, I don’t think I could have built the passion I have to stop human trafficking and spread the awareness that I do now – and I am so grateful for that aspect of it all. On the downside of the pageant, there are a
lot of girls who tend to compare themselves to others and that is the worst thing you could do because every single girl I competed with was deserving of that crown and so beautiful.

I found this year was a lot more stressful than last. Mostly due to the fact I had previously competed, so the standards I had set for myself were a lot higher than before. I could have never accomplished any of this without my community having my back throughout it all and my amazingly supportive
family – especially my mom.  All in all,
I would recommend the pageant experience to any girl of any background because all of the amazing friendships
and confidence you can build – and hey… who knows… you could bring home a crown. 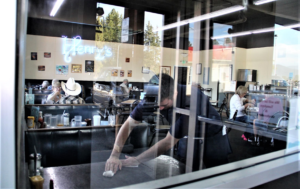 They Cummings family had put the diner on the market previously – without sound closure. Come August of this year, they would discover why. Everything had finally come together in storybook fashion.

According to Bob Stickney of the Libby Pioneer Society, Henry Hall was the original owner by which the now storied restaurant found its name. Henry’s daughter, Neesia, would later take the helm. Neesia’s son,
Dr. Steve Davidson – is now an established Libby area dentist. (No confirmation on whether all those pies had any influence
on Dr. Davidson’s career choice?)

“My kids like getting their hot chocolate and whipped cream there,” shared Libby resident Brittany Katzer of Henry’s today.
“It was a tradition my dad used to share with me, so I carried it on with them!”

“A table of friends and a platter of fries,” shared former resident Stacie Burns of her memories there.

“I have flashbacks of childhood and
going with my grandma,” Betty Jo Wood
reminisced. 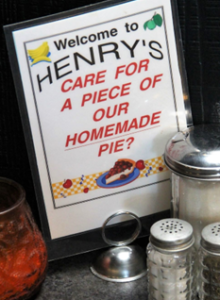 Sentiments of family, friends, neighbors, and friendly faces flood the minds of many who have spent time nestled in the booths and seated alongside the
tables near the trademark bay window fronts looking out to Highway 2.

The home cut fries… huckleberry pie… homemade soup… cheesecake… burgers… chocolate shakes… “It is the one place
I always go for lunch,” shared Patricia
Sargent. “Their food is homemade. Quality that has been the same for many years. Their staff and waiters/waitresses are tops – they stay and stay. Must say something good about the owners. So lucky to have them!”

Phelps echoed that sentiment as
September began and the Cummings crew
stepped right up to ensure a sound
transition to ownership for himself. “They have been absolutely amazing in showing me the ropes and filling me in on how things work here daily. I have no intention of changing a thing. If it isn’t broken…” he said. “And I’ve already been kindly threatened by some of the senior patrons not to do so.”

If anything, some traditions are about to return. The vintage counter seats are again open for daily dining. And despite the challenges that many restaurants have faced in recent times, Henry’s is proud to be fully staffed and opening again from 7 a.m. to
8 p.m., 7 days a week beginning this
Friday, October 1.

“It’s that old school atmosphere with an established crowd that already feels like ‘family,’” he said while gazing around in what seemed near disbelief that he had truly found his utopic recipe for life. “And I have such a great team here.”

Henry’s Restaurant is located at 405 W 9th Street in Libby (at the corner of
Highway 2 and Idaho). 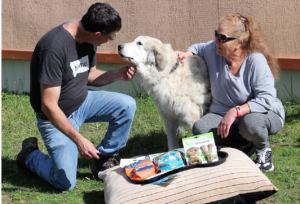 Tonia Wilson of Libby and her beautiful rescue, Miss Freya,
received their loot from the
2021 National Dog Month Contest held this past August inside the pages of The Montanian.

Freya had Gary Dutton of
Homesteaders Ranch & Feed  wrapped right around her paw as she soaked in her moment in the Saturday sunshine. Over $100 in goodies and gift certificates was donated by Homsteaders and Montanian editor, Stacy Bender.

Once the meet-greet-n-reward session was complete, Freya was ready to cruise the neighborhood and say hello to everyone per
usual routine…