Realistically snowmen have probably been around as long as people have lived where it snows, but the first documented snowman was constructed in 1380. They were especially popular as outlets for artistic expression. In fact, the ruler of Florence once commissioned Michelangelo to build a snowman.

The incorporation of pagan ritual into our modern Christmas festivities is obvious. One notable example involves Christmas carols. European clergy commissioned religious songs for the season to replace pagan ones and often used them in conjunction with nativity plays. Originally in Latin, later carols were written in local languages so that the common people could understand them and sing along. The Twelve Days of Christmas was popularized by the song we all know, but it originally referred to the twelve days between the birth of Jesus at Christmas and Epiphany on January 6 when the three wise men supposedly presented their gifts of frankincense, gold, and myrrh to the Christ child. Ephiphany is celebrated by some Christian denominations, but not others.

Santa Claus, Kris Kringle, Baba Noel, Papa Noel, and Old St. Nick all refer back to the same man – Saint Nicholas, a monk born in modern-day Turkey around 280 A.D. who went on to become the patron saint of children. A pious and generous man, he supposedly gave away his inheritance to the poor. In one particular story, he left dowries for three poor sisters who were to be sold into slavery by putting gold coins into their stockings that were left hanging by the fire to dry. This is the origin of our Christmas stocking today, although in the past it was more common to use one’s own stockings, not highly decorative ones. Saint Nicholas’s feast day is December 6.

By the mid 1500’s, St. Nicholas was the most famous saint in Europe and over time he became more and more associated with the Christmas holiday, which coincided roughly with the date of his feast. As Sinter Klaas, he was brought to New York, then New Amsterdam, by the Dutch. Washington Irving popularized the jolly, bag of goodies toting Sinter Klaas, or Santa Claus, we know today in his book, The History of New York, published in 1809. Over time, commercialization took over until the jolly old elf became the adjudicator  of naughty and nice with which we are all familiar.

Christmas is many things to many different people. Whatever your particular Christmas traditions, may you enjoy the warmth of fellowship and generosity as we celebrate this week, saying good bye to a year of hardship for many, and ringing in a new, hopefully better 2022.

By Karen Morrissette, The Montanian 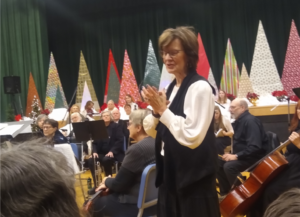 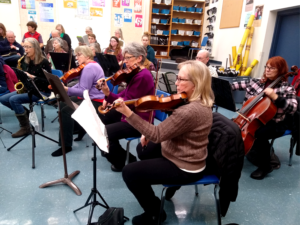 What’s the Grinch’s least favorite band? The Who.

Why did the snowman call his dog Frost?

What did Adam say the day before

gingerbread man put on his bed? A cookie sheet.

Why is everyone so thirsty at the North Pole? No well, no well.

exactly like your job? You do all the work and some fat guy in a suit gets all the credit.

How does a snowman lose weight?  He waits for the weather to get

What do you call a snowman with a six pack? An abdominal snowman.