“This was my third season working as a YCC [Youth Conservation Corp] crew leader,” shared
Crystal Graham. “I really love our program because it gets the kids a foot in the door for future career opportunities within the Forest Service. I also like that our work ethic and grit rubs off on them a little, too!” 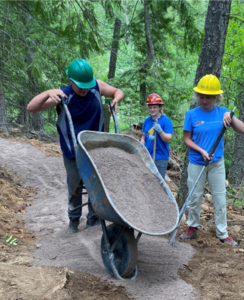 “They learn a bit about what the Forest Service is all about and hopefully have some fun along the way. I’ve been very fortunate to get to know these kids and be a small part of their summer and lives. They worked really hard for me and never gave up, even in the crazy heat,” Graham added. “Seeing kids return from previous years is one of the most rewarding parts of job.”

Dave Thorstenson, recreation manager for Three Rivers Ranger District, echoed Graham’s sentiment. “I’ve got returning crew working in all areas this summer – trail crews, fire crews, recreation management. They come back and then act as mentors for
the next generation.” 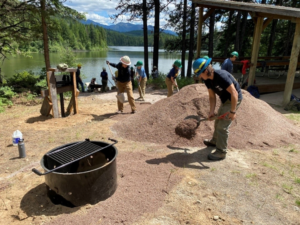 All Three Rivers YCC, recreation, and trail crews were on deck for the 2021 Alvord Lake reconstruction.

This year’s YCC crew tackled a wide variety of tasks as the summer unfolded. Cleaning and staging the Baldy and Garver lookouts for the season, working to clear the path at both Upper and Lower Hawkins trails, and breaking trail to Northwest Peaks. Care and maintenance of
several area campgrounds also came into play for the young stewards, and the list goes on.

When asked what one of the biggest challenges was to overcome in their season of work, a few of the crew members giggled then agreed it was learning how to walk in a straight line while tree netting. The task was ‘simply’ to walk through 5 to 40 acre units while adjusting or maintaining nets on existing trees planted in previous years, or to completely remove the nets from trees that were gown enough to withstand browsing wildlife. The hard part – indeed – staying in that straight line through the sometimes-whacky terrain. “Rarely did we go through nice level areas,” said Graham. “Very steep units like up towards Keeler lookout where a lot of trees had blown down made this task a definitive challenge.” 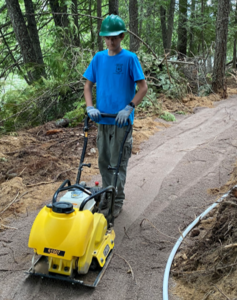 Swamping – clearing anything cut behind a sawyer – to ensure everything within 4 feet of a trail was cleared and running a DR mower (essentially a huge weed whacker) were another part of the trail maintenance tasks charged. One of the longest trails cleared was about 8 miles, hiking with a pack, and working the whole way.

As the 2021 fire season began, YCC crews became even more productive and stepped in to help on some preventative tasks. “We mainly just helped spread mulch at the Upper Ford and then did some hand piling. That is, we went into a unit and made a ton of brush piles,” said Graham.

Replacing the wooden planks on a bridge down Long Meadow Road had also been slated to tackle with the  engineering crews. YCC had no lack of opportunity to implement that grit of which
Graham spoke. Wind events alone in the area
had left trails heavily ridden with fallen trees
and debris.

“But Crystal makes our jobs fun,” shared one crew member. “She doesn’t just tell you what to do, she’s right there working with you.” Both Graham and
Thorstenson consciously work towards keeping ‘fun’ in the YCC
program’s summer vernacular each year.

“It’s important,” said Thorstenson. “Important they see the value in working hard, but also the value in stopping to reset and reap the benefits of their efforts along the way.” 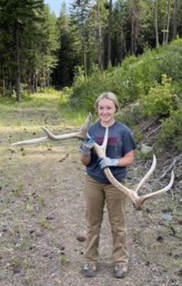 Audrianna Fisher poses with one of the perks found while tree-netting …  she had walked herself  straight into a monster shed which the entire crew then envied all summer.

This Saturday, September 25 is Public Lands Day. If you are able, be sure to get outside and enjoy the fruits of the labors which all Three Rivers Rangers District summer crews put into your backyard this summer. To learn more about the YCC program, please visit www.nps.gov/subjects/youthprograms/ycc.