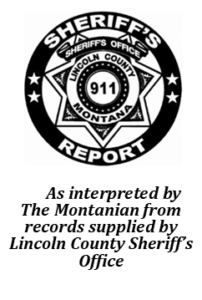 10:38 a.m. Female calling to report a stolen vehicle, said that her father let a neighbor borrow it over a year ago and now the neighbor refuses to give it back.

12:52 p.m. Report of an unknown man in a vehicle coming to property, walking across pasture with a chain saw.

1:27 a.m. Caller reporting that is sounds like people are having sex under their trailer.

9:58 a.m. Caller reporting mother had and unwelcome male at her residence yesterday, was concerned because male asked if a drone had been seen flying around as it had been stalking him. Caller believes it was mental heath or drug related.

12:06 p.m. Caller reporting a truck was vandalized after being dropped off at a local auto shop for mechanical services.

2:07 p.m. Caller reporting the theft of a riding lawnmower that was stolen sometime between September and now.

3:40 p.m. Caller reporting that while he was hunting his vehicle was broken into and his firearm was taken.

10:43 a.m. Female caller saying she believes her propane tank has been tampered with.

6:53 p.m. 911 caller reporting that an SUV just ran through his yard almost hitting a tree.

7:29 p.m. Caller reporting they just saw a mountain lion cross highway 2 and go between a local tire store and a local hotel

1763: The first synagogue in what would become the United States opened in Newport, Rhode Island.

1898: The Duquesne Country and Athletic Club defeated an all-star collection of early football players 16-0, in what is considered to be the first all-star game in professional American football.

1674: Father Jacques Marquette founded a mission on the shore of Lake Michigan to minister to the Illiniwek Indians. (The mission grew.)

1867: Minnesota farmer Oliver Kelley founded the Order of the Patrons of Husbandry (known today as the Grange).

1492: Christopher Columbus (1450-1506) became the first European in recorded history to set foot on the island of Hispaniola (now Haiti and the Dominican Republic).

1865: The 13th Amendment to the United States Constitution was ratified, banning slavery.

1877: The first edition of the Washington Post was published.

1776: Gilbert du Motier, Marquis de Lafayette (born 1757) entered the American military as a major general to fight against the British.

1989: Born this day: actors Nicholas Hoult (Clash of the Titans, Jack the Giant Slayer), and Caleb Landry Jones (No Country for Old Men, The Social Network)

1660: Margaret Hughes (1630-1719) became the first woman to appear on an English public stage, in the role of Desdemona in a production of Shakespeare’s play Othello.

1854: Pope Pius IX (1792-1878)  proclaimed the Immaculate Conception, which says that the Virgin Mary was conceived free of original sin.

1851: The first YMCA in North America was established in Montreal, Quebec, Canada.

Puzzles will continue in next weeks paper.
Sorry for any
inconveniences.