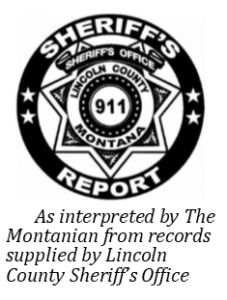 9:52 a.m. Someone on Hwy. 2 called to report unauthorized logging on his land. Since the violators had a chainsaw or two, the property owner decided not to confront them without backup.

10:25 a.m. A driver near Cabinet View was spinning brodies and speeding on private property. They were too fast and so, did not get caught.

9:23 a.m. A woman in Libby received a scam call about her Northern Energy bill.  She was amped up about the scam but unfortunately law enforcement couldn’t shed any light on the situation.

3:49 p.m. Someone called 911 to report dogs attempting to attack kids that were getting off of the school bus at a Libby trailer court. The caller felt the neighborhood was going to the dogs but thankfully they were all bark and no bite that day.

10:48 a.m. Two German shepherds on Hwy. 2 killed a fawn and ate its carcass then moved on to kill a neighbor’s fowl. Although they likely enjoyed the  venison and chicken, their behavior left a bad taste in the caller’s mouth.

11:25 a.m. A woman called to report suspicious  footprints going onto her porch but once she cooled her heels, she realized that her concern was unfounded.

12:47 p.m. A woman reported the theft of a black mastiff in a relationship dispute.  Her brother’s ex-fiancé took it.  She decided not to marry him but found pet ownership very engaging.

2:35 p.m. A suspicious vehicle was reported parked across from Kootenai Falls on Hwy. 2. Officers responded to find a woman who wanted to think, so they asked her to  move to the other side of the road. She then had to contemplate whether or not she should go chasing waterfalls.

9:50 p.m. A man on Farm to Market reported being hit with a pole by another man in a dispute over a dog. Their behavior made the naughty list all the way up in the north pole.

11:33 p.m. Someone at a local motel called 911 to report a woman impersonating the big bad wolf and attempting to knock a door in.

3:15 p.m. Someone who must have received coal in their stocking dumped hot embers into a Fisher River dumpster causing flames and a fire department response. Bah humbug.