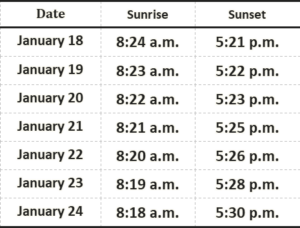 Avatar: The Way
of Water

Critics consensus: Narratively, it might be fairly standard stuff — but visually speaking, Avatar: The Way of Water is a stunningly immersive experience. .

1903: President Theodore Roosevelt sent a radio message to King Edward VII via the first transatlantic radio transmission originating in the United States.
1911: Eugene B. Ely landed on the deck of the USS Pennsylvania stationed in San Francisco Bay, the first time an aircraft landed on a ship.
January 19

1929: In Old Arizona, the first full-length talking motion picture filmed outdoors, was released.
1936: Edward VIII became King of the United Kingdom. (He abdicated on Dec. 11 of the same year.)

1570: James Stewart, 1st Earl of Moray, regent for the infant King James VI of Scotland, was assassinated by a firearm, in the first such recorded instance.
1719: The Principality of Liechtenstein was created within the Holy Roman Empire.

1848: The California Gold Rush began when James W. Marshall found gold at Sutter’s Mill near Sacramento.
1860: French inventor Etienne Lenoir was issued a patent for the first successful internal-combustion engine.
(The uranium core of one bomb was never found.)