Steve Vos and his 1975 Chevy Monza. he collected the pieces for over 15 years, and built it entire from scratch… including roll bar. Photo by Moira Blazi, The Montanian.

“ These cars are all over town, “ Voss told the Montanian “and it takes a special occasion to get them out. These folks put thousands of dollars and thousands of hours into their cars, and I thought, we need to get these cars out to be seen and driven”.

So, in 2016, Voss called a few friends and in three weeks, he had 17 cars lined up to participate in the first Raven Run car show.

“ I wanted to name it after our daughter Raevynn, but her name was just not going to work so we changed the spelling” Voss added with a laugh.

Now, in its fourth year, 27 “officially” registered, joined with a few others to make a total of 37 cars  participating in a poker run and car show beginning and ending at Voss’s shop RMV automotive out on Hwy 2.

“I had no idea it would become this popular, what this has turned into is just spectacular in my mind” Voss said. “ Last year we had a scavenger hunt, this year we held a Poker run, starting at Cedars restaurant, going to the golf course then to Western building Center, then to Riverfront Park, and back here to RMV. The high hand and low hand split the pot.”

In addition to the Poker run, Ravens Run offers prizes for the coolest, the hottest, and “the peoples choice”.

“All the drivers have a ballot to cast,” Voss continued, “Frank Harland won the coolest and peoples choice and Nick Grotjohn won the hottest.

Frank Harland’s 1933 Ford Cabriolet is definitely different from the rest.” Harland told the Montanian “ it was redone in 1980 down in California, a friend bought it from them and I bought it from my friend over 12 years ago” Harland recounted. Although he describes himself as “more of a mechanic than a body guy” Harland really loves this car.

“They make copies of this car from fiberglass and metal; this is an original body” Harland told the  Montanian.

Harland actually won three awards, because in addition to the people’s choice and coolest, there was a “chefs award”, voted on by the volunteer chefs who provided the barbecue for the event.

The winner of the other category , the “hottest” car went to Nick Grotjohn for his 1970 Chevelle. “I bought it in high school, tore it apart and then it sat around for  couple of years”  Grotjohn told the Montanian. “I replaced the engine, then, in 2012, I spent every night and weekend fixing it up. It has a LS3 engine, custom interior, and a custom Darren Short  paint job. I’ve put thousands and thousands of dollars and hours into this car,” Grotjohn told the Montanian. “I am buddies with Steve, and this is the first time I’ve ever had it in this show, I’ve had it out at  about 100mph, but, it will go a lot  faster.  These cars, they are never done”. He added.

“Over 150 people have helped put this event together, including tony Swanson and Justin Luchi,” Voss told the Montanian. “it is what I wanted in the back of my mind and the success of it surprised the heck out of me.” Voss said.

Look for the fifth Ravens run next summer, for more info, call Steve Voss at RMV automotive at 293-8828. 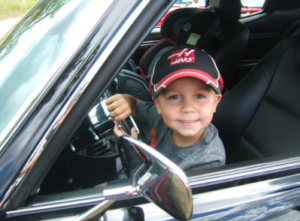 Through Aug. 1, samples from five white-tailed deer in the Libby area have tested positive for chronic wasting disease. The first detection, which occurred in late May inside city limits, marked the first time that CWD was found west of the Continental Divide in the wild.

As of Aug. 1, samples from 62 animals (57 white-tailed, four mule deer, one moose) in and around Libby have been submitted for CWD testing. Of those, 45 were collected from road-killed incidents. Results are pending for 28 samples.

FWP has established the Libby CWD Management Zone, which encompasses roughly 10 miles around the detection sites. Within this Management Zone, the goal is to identify the prevalence and distribution of CWD. To do that, FWP is working closely with the City of Libby and Lincoln County to develop a CWD Response Plan, which will involve sampling deer in this area. Since the initial detection occurred, FWP has been working with the City of Libby, Lincoln County Sheriff’s Office, Montana Department of Transportation and the Lincoln County Landfill to collect symptomatic deer or road-killed deer for sampling.

On July 15, the Libby City Council approved a resolution authorizing Libby City Police, Lincoln County Sheriff’s Office, and Montana FWP personnel to harvest and collect for sampling deer from public property for the purposes of testing for CWD. This testing will help FWP identify the prevalence and distribution of CWD in the area. FWP will begin collecting and sampling deer using clover traps this fall.

FWP is finalizing details of a Special CWD hunt in the Libby area this fall. FWP will sell 600 white-tailed deer antlerless B licenses in the Libby CWD Management Zone, which includes portions of Hunting Districts 100, 103, and 104. The hunt will occur at the same time as the archery and general hunting season and follow the same regulations for dates and weapon restrictions (i.e. you must use archery equipment during the archery season).

All deer, elk and moose harvested within the Libby CWD Management Zone, including any harvested with a general license and/or a Libby Special CWD Hunt B license, must be submitted for sampling. A map of the CWD Management Zone will be available online, at FWP Region 1 headquarters or by request (contact Dillon Tabish at 751-4564 or Dillon.Tabish@mt.gov).

During archery (Sept. 7-Oct. 20), youth, deer only (Oct. 17-18) and moose season (Sept. 15 until start of general deer and elk season), hunters who successfully harvest an animal are required to bring the head to the FWP Libby Office, 385 Fish Hatchery Rd. A collection site will be set up for hunters to self-report and submit the head for testing.

Starting Oct. 26 and remaining throughout general deer and elk season, all animals can be checked at the new FWP collection station (Montana Department of Transportation shop site on US Highway 2, mile marker 35). The collection station will be open seven days a week from 11 a.m. through one hour after sunset. Hunters who quarter or bone out their animal in the field must bring the head to the collection station. Samples from the head will be submitted for testing.

FWP, the Libby Police Department and Lincoln County Sheriff’s Office are responding to reports of deer that appear sick and removing the animals for sampling. For people in the Libby area who see a deer that appears to be sick, please call (406) 291-6539 or Lincoln County Dispatch and leave a message with your name, number, the location of the animal and the time you saw it.

FWP held its latest public meeting in Libby on Aug. 2. The next information meeting is Aug. 16 at noon in the Ponderosa Room at Libby City Hall, 952 Spruce St.