Four of the five skiers stand atop some of the wood they have sold. 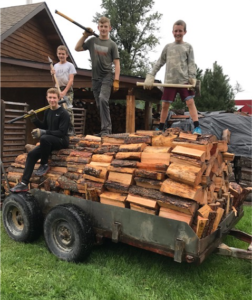 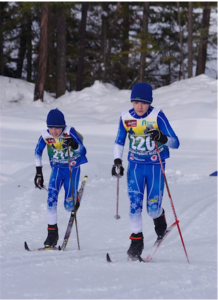 Everyone loves a true competitor, and when that athlete is a kid trying to earn his way, the allure – the desire to help – is even greater.
That’s the case with the Kootenai Cross-Country Ski Club’s youth Nordic Ski Team.
This group of five youthful cross-country skiers raised $1,400 recently for ski wear, which included tops, leggings, hats and gloves. Their efforts were enough for five complete ski uniforms.
These young skiers cut, split and stacked fir and larch firewood to raise their funds.
Now, having sensed the fruits of their labors, they seek to sell firewood during the summer months while out of school so they may travel to various regional and junior national ski competitions next winter.
“They did a great job with their fundraiser,” said Kootenai Cross-Country Ski Club President and coach of the Nordic Ski Team Ben Scott. “They’ve had a taste of it, and now it’s time to take them to the next level, bigger junior regional and national races. It’s time they see some real competition.”
These five skiers are Grayson Thompson, Rowen Sherbo, Colter Anderson, Cody Watson and Reed Scott. The skiers are ages 12 to 16 years old.
Under the adult supervision of Scott and other parents, these young skiers have done the work – cutting, splitting and stacking the firewood, which measures a trailer-full, nearly two cords, which sells for $300. A cord of wood is a stack four-feet by four-feet by eight-feet or 128 cubic feet.
“We want to take them; it’s time to take them to the next level,” Scott said. “They’re seeing some successes here. Now, it’s time to run them up against some stiffer competition.”
Scott said it’s important for his young skiers to see more competition to use as a yardstick for growth.
“This is the next step in their training,” Scott said.
The cost of traveling and lodging to Worth Park in Minneapolis, Minn., is about 2,500 per skier, Scott said. “They’ve got the desire.”
The skiers are taking orders and will make it available from June through late August before they return to classes in the fall.
To place an order, call Scott at 291-8091.
(Alan Lewis Gerstenecker is secretary and publicist for the KCCSC.)