A month ago, the end of Montana’s experience with the COVID-19 pandemic looked like it could well be in sight.

The state had made strides toward vaccinating a critical mass of Montanans against the virus, efforts that appeared to be dragging its spread to a halt. The first week in July, the state averaged only 40 to 50 newly reported cases a day —down from 120 to 150 at the beginning of April. The number of Montanans hospitalized with severe cases of the virus was down to a fraction of its winter highs.

Citing that data, Gov. Greg Gianforte announced
June 30 he was formally ending the COVID-19 state of
emergency his predecessor, Gov. Steve Bullock, had
declared in the initial stages of the pandemic. “Today,
the conditions we face are nothing like what we faced
fifteen months ago, twelve months ago, or six months ago,”
Gianforte said in a statement.

But then, as the Montana summer baked into a hot, smoky July, the state’s case counts — like those around the nation — began to tick upward again.

As of July 27, the U.S. as a whole was averaging about 62,000 new COVID-19 cases a day, according to data from the U.S. Centers for Disease Control — about four-and-a-half times as many cases as were being reported at the beginning of July. The increase in Montana has been less dramatic, but is still clearly visible in the data: With counts now averaging more than 100 news cases daily, the state is seeing roughly double the volume of COVID reported as during the early summer lull.

Part of the increase is attributable to the COVID-19
Delta variant, a faster-spreading version of the COVID-19 virus that has been the predominant strain in the state since mid-July. Montana public health leaders have also worried about declining numbers of people who are signing up to
get the vaccine.

Jim Murphy, who led the state health department’s
Communicable Disease Control and Prevention Bureau
before retiring at the end of June, for example, told the
Helena Independent Record earlier this summer that he’s concerned about the state’s vaccination progress.

“We need to get somewhere between 70-80% of the population fully vaccinated to avoid what I consider a hellish fall that I think could be coming,” Murphy said.

As of July 28, the CDC says Montana’s statewide
vaccination rate is 44%. (The state’s official dashboard, which reports vaccination rate as a percentage of currently eligible residents and excludes some avenues of vaccination, reports that 48% of the state’s eligible population is fully vaccinated.)

Montana health officials made rapid progress administering vaccines this spring. As of the beginning of June, just
a month after vaccines became available for adults outside of priority categories on April 1, 38% of Montana
residents were considered fully vaccinated. But uptake has slowed since, with the statewide vaccination rate growing only 6 percentage points over the past two months.

Vaccination rates also vary wildly across the state.
Flathead County around Kalispell had a vaccination rate of 32% as of July 28, according to CDC data — 12 percentage points below the state as a whole. Missoula County, in
contrast, had a rate of 54%.

Several counties with large Native American populations, which have been more vulnerable to COVID-19 and were prioritized for early vaccination efforts, have
high vaccination rates. Glacier County, which includes
most of the Blackfeet Reservation, has a rate of 63.5%, for example.

Federal health authorities have responded to the national uptick in COVID-19 cases by encouraging even vaccinated Americans to put their masks back on in some situations.

The CDC updated its official guidelines [July 24] to
recommend universal masking inside schools and more |generally in indoor public settings in counties with “substantial or high transmission.”

Gianforte, who campaigned for office last year saying he’d rely on “personal responsibility” rather than manage the pandemic with government mandates, criticized the
new recommendations.

“The CDC has repeatedly changed its mask recommendations over the last 16 months,” the governor wrote in a
Facebook post. “Going forward, local school leaders should look at the data, which shows low transmission rates among kids, and listen to parents before considering mandating masks in our Montana classrooms.”

In response to questions from Montana Free Press,
Gianforte Press Secretary Brooke Stroyke indicated in an email that the governor also isn’t supportive of the broader recommendation to mask in public.

“The CDC’s newest mask recommendation undermines confidence in the safety and effectiveness of COVID-19
vaccines,” Stroyke wrote in an email.

As of July 29, a CDC map rated 25 of Montana’s 56 counties as having “substantial” or “high” levels of community transmission, making them subject to the renewed indoor masking recommendation. Flathead County was among the counties with a “high” rating. Yellowstone County (Billings), Cascade County (Great Falls), Lewis and Clark County (Helena), Gallatin County (Bozeman) and Missoula County are all categorized as having “substantial” transmission.

The CDC says its categorization is based on the positivity rate for COVID tests administered in specific counties as well as the rate of new cases reported in the last week.
Because rates are calculated by dividing a count by the
number of residents, the low population counts of small rural Montana counties routinely distort rate-based
statistics.

The CDC’s criteria, for example, labels counties as
high transmission areas when the weekly number of new
COVID-19 cases exceeds 100 per 100,000 residents. In
counties of less than 1,000 people, that means a single new case is enough to trigger the “high transmission” designation. Golden Valley’s one case and 728 residents, for example, translate to a rate of 137 cases per 100,000 residents.

The Montana Department of Public Health and Human Services declined to make a subject-matter expert available for an interview for this story, saying some of its key staff were out of the office this week. Spokesman Jon Ebelt said in an email that a late July increase in Montana case counts was primarily due to new cases in urban counties. He also said 93% of new COVID-19 hospitalizations in Montana since late April have been for unvaccinated patients.

“New COVID-19 outbreaks and an increase in cases
remind us how important it is that all eligible Montanans
get the COVID-19 vaccine,” Ebelt said. “We can’t stress
that enough. DPHHS encourages Montanans to talk to
their healthcare provider about getting the safe, effective vaccine.”

Printed with permission from 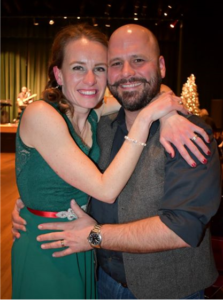 Jake and Sara Mertes of Libby tragically lost their lives in
a single-engine plane crash on Saturday, August 7,
in Victoria, Minnesota.  (CPMC Photo)

“It is with great sadness and heavy hearts that we inform you of the passing of Dr. Sara Mertes and her husband Jake Mertes on Saturday, August 7, 2021,” read an online release from Cabinet Peaks Medical Center on Sunday evening, August 8. “Jake and Sara were active members in our community and their unexpected passing is difficult for us all. Dr. Mertes touched the lives of many people.”

According to a press release from the Associated Press on August 8, 2021, at 4:46 p.m., “Jo Mertes, of Mantador, North Dakota, told the Star Tribune
Sunday that her nephew, 42-year-old Jacob Mertes and his 37-year-old wife, Sara Mertes, of Libby,
Montana, died along with her nephew’s 72-year-old stepfather, Dr. James Edney, who was piloting the plane. There were no survivors, officials said.”

“The Federal Aviation Administration said the plane was flying from Alexandria Municipal Airport to Eden Prairie’s Flying Cloud Airport before 6 p.m. Saturday when it went down and burst into flames in Victoria, a city of about 7,300 about 25 miles (40 kilometers) southwest of Minneapolis.”

News of the well-established Libby couple’s
passing devasted the community as it broke this past weekend. Cabinet Peaks Family Medicine Clinic would be closed on Monday, August 9, to allow for the co-workers of Dr. Mertes to grieve the enormous loss. Jake Mertes wore multiple hats with the
Lincoln County Health Department.