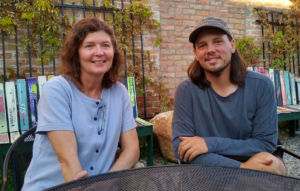 Karen Shelly and Blaine Doherty of the Montana Department of Natural Resources and Conservation Urban and Community Foresty Program take a break from their work in downtown Libby. (Photo by Moira Blazi)

…for removals, new plantings, pruning and long-term management. “For example, we noticed a Douglas fir and a white fir that had been planted too close together; we recommended that this was something that could be a problem in about 10 years” shared Doherty.

Shelly said that red oaks and horse chestnuts are doing quite well in Libby and do not seem to be overly abundant, suggesting a few more could be planted and then maintained. “Of course, you have to water trees,” she added with a smile. “Especially young trees and especially when the temperatures are above 90 degrees for several consecutive days like we had this summer. Lawn sprinklers are not sufficient, trees need deep watering of at least the top 18 inches of soil once a week
during dry periods.”

Libby’s original inventory, conducted in 2013, lists 1,751 street and park trees – consisting of 67 unique species with an estimated replacement value of 1.7 million dollars. It is estimated the trees provide the city with $135,322 per year in benefits like reduced heating costs and added oxygen. They remove about 587 pounds of pollutants from our air annually, sequester 116,511 lbs of carbon dioxide, and have raised property values by $99,456.00. This “green infrastructure” is about 33% ponderosa pine, 14% Douglas fir, 7% blue spruce and 5% little leaf linden, with the other 63 species filling in the remaining percentage. All of these statistics and an interactive map of actual tree locations can be found on the Urban and Community Forestry page of the DNRC website under Montana Statewide Urban Tree Inventory:
dnrc.mt.gov/divisions/forestry/forestry-assistance/urban-and-community-forestry/statewide-urban-forest-inventory.

The site will soon be updated wtih data collected this September.

“In order to successfully manage an urban forest you have to know what’s there!” said Shelly. “I was surprised to find a tulip tree growing at the courthouse!” Like many of us, Doherty likes the larches. “Libby really has some beautiful larch trees, he said,” they are super healthy and doing great!”

Further inquiries about the recent data collection may be directed to Karen Shelly in Missoula at (406) 542-4246.