Once she zeroed in on her design of choice, it was time to create a list of supplies needed.  Plywood, nails, concrete mix, rebar…  the list was growing and her next step in planning revealed.  How would Tabitha fund her project while maintaining her goal to respect the environment along the way?
Tabitha’s quick and resourceful thinking soon left her focused on collecting cans from local neighbors after school and each weekend.  Filling bags with aluminum recyclables, she traded them for cash – .28 cents on the pound.  “It definitely took longer than I had anticipated,” Tabitha shared in conversation this past week of both collecting cans to fund her project and rounding up enough plastic bottles and recyclables to build the bench itself.
With the occasional help of her younger sister, Tabitha would then log nearly 126 hours stuffing each bottle brick to later fill the inner framework of her bench.  “It was trickier than I thought getting each bottle stuffed tightly enough with all those other plastics,” she said.
Senior Troop leaders, Kathy Powers, and her husband, “Mr. W” (as the troop calls him), then offered hands-on assistance and direction to properly lay forms, mix concrete and construct the bench.  Serendipitous connections with the Libby Ambulance Barn would pave the way for a safe, open space where these final steps could be comfortably completed.
“We were sure caught off guard by how much that little bench weighed in the end,” shared Mr. W.  Everyone who had come to help place the bench on Christmas Eve then giggled in agreement.  “Thank goodness Jolee’s brother was able to help with that,” exclaimed Tabitha, and again everyone snickered while recalling the herculean efforts required.

The first of the two benches which Tabitha committed to placing has been utilized by countless LES students this past month. “If you ever feel lonely, come sit on this bench,” is written across bottle caps which were embedded atop the concrete seat.
When asked of the impact she believes her project might hold now that it is partially completed, Tabitha wrote, “The bench is there to help make kids feel safe. It could help build a caring community.  It helps to make school a safe and positive place.”
Currently, Tabitha is collecting aluminum to fund the supply list for bench number two. She is also diligently salvaging and storing every “Cascade” and “Sparkling Ice” bottle she can find, as the bottle bricks themselves must be uniform in size for future construction. Plastic bags, candy wrappers and an assortment of plastic recyclables which can be stuffed inside each bottle are also on her list for collections.
While she remains focused on completing her Silver Award journey, Tabitha is simultaneously applying the many things she has learned through this recent process and considering what Gold Award projects she might like to address as a Senior Scout. Alongside her fellow troop mates, ideas entertained have included improving the bridge which crosses Flower Creek near the elementary school or perhaps replacing the steps which lead up to either end of the grandstand at the Libby Loggers baseball field.
No matter their final decisions, Tabitha and her fellow scouts employ one to feel hopeful that the future is in their youthfully inspired and capable hands.  With servitude towards community and the diligent will to independently rise and make a difference in the world around them, these scouts are outstanding examples in their community
Those wishing to learn more about how to connect with the Girl Scout community in Libby and/or to make a donation of recyclable goods to help Tabitha complete her Silver Award mission may do so by contacting Kathy Powers, Troop 3443 Leader, at kapow222@gmail.com or by phone at 293-1498.

Goodenough and Jolee Kurle sit atop the buddy-bench installed on December 24, 2019 at 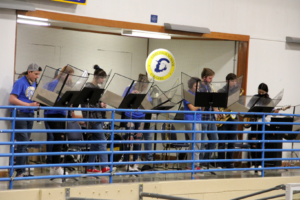 spirits high and toes tapping during the first home appearance for the Libby Logger Greenchain this past Friday, January 15.  Each instrument, as visible on the tuba pictured here, is now equipped with a Libby Logger bell cover to prevent liquid particles from emanating forth to one another or the crowd below.  Photo by Stacy Bender, The Montanian

Below: “Today we found some amazing books in our donations!

The Princess and the Goblin c.1920 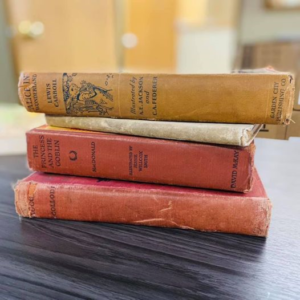 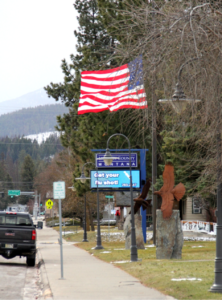 Above: Out of respect for fallen Capitol Police officers Brian D. Sidnick and Howard Liebengood, flags remained at half-mast outside the Lincoln County courthouse on Wednesday, Jan. 13. Photo by Stacy Bender, The Montanian 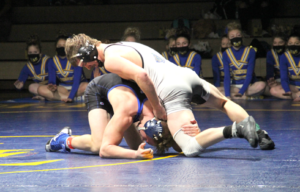 LHS Senior, Tucker Masters, grapples with his opponent from Columbia Falls on  Friday, January 15. The duo would battle for a full 6-minute match which kept both visiting and home fans on the edge of their bleacher seats.

Masters would ultimately claim the win.

Photo by Stacy Bender, The Montanian