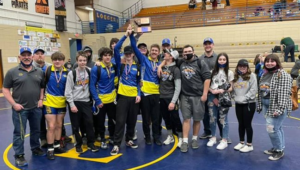 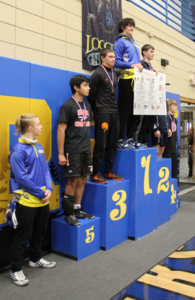 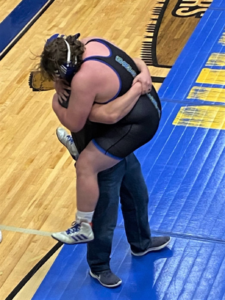 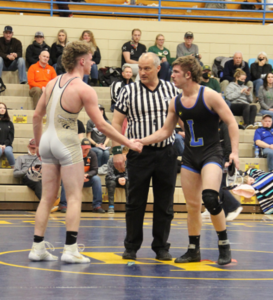 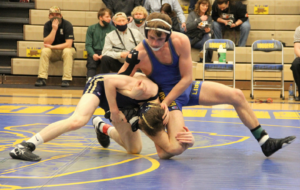 “The Greenchain has really dialed in on fine tuning their strengths and improving their weaknesses this season. Overall as a team we work on being offensive and aggressive. I have been pushing the boys hard on conditioning and it really shows going into competition.

3 words: Pin to win. I’m so proud of the guys this year, especially being a year where we have only team duals for the season. Wrestling is an individual sport, but with duals, the kids need to pin in order to help the team with team points. At the Divisional tournament last weekend, out of all the wins we had I think we only had a handful of them that were not pins. It was very impressive to watch and I couldn’t be more proud as a coach!”

“These guys have been working extremely hard to get ready for the Divisional and State Tournaments. They work hard and push each other to get better every day – conditioning hard so they can win those battles and take their
opponent in the 3rd round.

Because of their work we had four wrestlers in the final round this weekend, two who took the championship title. A freshman in the final round and 12 athletes now headed to State this week. I can’t wait to see these kids compete and watch their hard work pay off.

These seniors have worked hard with the younger wrestlers in prepping them for this level of competition.

It has been a great year and I am so proud of all this team has done to find success. I wish them all the best of luck as they head for the State mats and I can’t wait to see what the competition bring. Our Greenchain athletes are one in a million and take great pride in being a part of this family.

Following the example of Hannah Voskuil’s backward story, “Currents,” students at Libby High School have been creating their own backwards stories. To read more Logger Legacies

Elliot laid on the damp, overgrown grass. The stars were covered by the clouds, so it felt like he was all alone – lost in space. Everything was so quiet.

Before that, he drove his dusty old pickup truck on an empty highway. The radio played a soft song with a sad guitar solo. The empty fields he was passing looked like a rippling dark ocean.

Before that, he left his friend’s house. Loud party music blaring from across the street, it was a miracle the cops hadn’t been called yet. He grabbed his keys from his pocket and started his truck up, engine roaring to life. Headlights illuminated two stray cats eating from an overfilled garbage can.

Before that, he drank water from a bathroom sink. The taste of rust invaded his mouth. The bass from the music made the floor vibrate.

Before that, he walked through a crowded room. Catching bits of drunk conversation and sloppy flirting. Someone was playing wonderwall on a horribly out-of-tune guitar. Nobody seemed to mind, though.

Before that, he sat on a kitchen counter. The smokey room looked like a dream. In the dim light, he could hardly make out anyone’s face. He could’ve sworn that he was floating above the crowd. He felt so weightless.

Before that, he opened the front door, senses assaulted. The blur of the crowd, the smell and taste of the bitter/salty/sweet air, the loud music he could feel rattling around his skull. Everything was so much.

Before that, he passed a car wreck on the freeway. Small shards of glass reflected the red and blue of the police car’s lights. The shrill siren pierced his ears. Traffic was crawling along like a funeral procession.

Before that, he listened to his dad slam the door, angrily kick his shoes off, and stomp down the hallway. He could hear his mom asking and his dad yelling in response. He heard something hit the wall.

Before that, Elliot laid on his bed. Everything was so quiet. Staring at the peeling paint on his ceiling, he thought about absolutely nothing.

He sat upon his command seat within the bridge of his warship, a cold smile on his face as debris was all that could be seen.

Before, a massive bolt of energy struck a ship in the center of those that started to flee.

Before, the second armada, witnessing the complete destruction of their enemies, attempted to flee.

Before, the massive explosion spread from the cruiser, enveloping the first flotilla of warships.

Before, the massive bolt of energy leapt from the dark ship, seeming to come from the void itself. In an instant, the bolt enveloped the cruiser and erupted.

Before, one cruiser turned toward the weird signal, hoping to find its source. Little did they know how useless the effort was.

Before, every ship within the two fleets had an alert pop up. There was a large energy signal, and it seemed to be growing.

Before, he ordered the main cannon to be charged. It would be a great way to see its capabilities.

Before, none within the armadas noticed as the midnight ship approached, its dark hull and shining lights resembling the stars themselves.

Before, two flotillas of massive warships fought in a distant star system, completely unaware of the danger that approached. 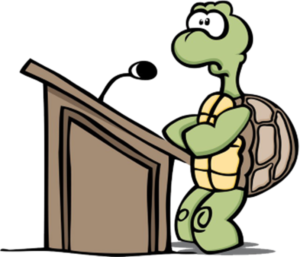 Participants from Grades 1-8 gave their presentations on Friday, February 19.

The following students were recognized for their presentations.