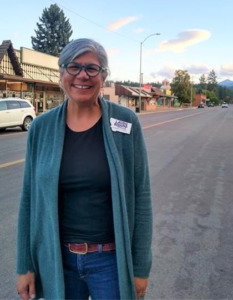 on Monday,
August 23,
to visit with

local residents about her

second seat
on the
U.S. House of
Representatives.

Some states gained while others lost, but Montana will at long last regain their second seat in the United States House of Representatives in 2023. This has happened because of our population growth in the Treasure State. Since 2010, Montana has added
nearly 100,000 people. This would be similar to
adding another city almost as large as Billings!

For most of our history, Montana had held two seats in the House, but in 1993 we lost a seat due
to national redistricting from the 1990 U.S. Census.
Currently that seat is occupied by Matt Rosendale,
a Republican. With hopes of balancing this out,
Democrat candidate Laurie Bishop is now running for the second seat to be voted on in the 2022
election. Laurie is just beginning to venture out around our great state and made an early stop in
Libby on Monday, August 23. In the impromptu
gathering of local Democrats and Independents,
Laurie listened to their ideas and concerns and
subsequently shared about herself and why
she is running.

Laurie lives in Livingston, Montana, where most of her relatives reside. She and her husband, who is from Ennis, moved there in 1996. She is currently serving her third term in the state legislature in a district she describes as being “purple” (neither
predominantly republican nor democrat).  It is noteworthy that in this district, neither party typically holds a seat for more than one term, but Laurie has.

She credits her success to three things:
1) The people know she has the desire to serve them.
2) She is firmly committed to

“supporting kids from birth to career.”
3) She believes in being respectful with her

colleagues and constituents, earning their trust.

Laurie’s life and career history reflect her main priorities. Her resume includes having been a previous small business owner. She has also held various positions in youth development and education, and for several years Laurie served as the Director of the Montana After School Alliance. And although her own children are almost grown and gone, Laurie doesn’t hesitate to note, “I am a mother first.”

When asked her priorities if elected to the House of Representatives, Laurie listed healthcare, funding infra-structure, housing, conservation, protection of public lands, and addressing not only the need for jobs but addressing needs of workers. Throughout her talk, she referred to the value in seeking common ground with people who hold opposing views. More than anything, Laurie is committed to helping to
restore what we all remember in the not-too-distant past; namely, genuine peace with our neighbors.

We the citizens are
petitioning to have the speed limit reduced on Highway #37 (from Libby to Libby Dam”) from 70 miles per hour to 55 miles per hour,” read a call for signatures which circulated throughout downtown Libby this past week. “This petition is requested for public safety for residents and vacationers.”

The information went on  to note the following for consideration
when assessing the organized request:

Petitioners have scheduled a meeting with
Lincoln County Commissioner, Jerry Bennett, to
present their petition and statements from concerned citizens on Wednesday, September 1, at
11:00 a.m. at the Commissioner’s Office, Lincoln County Courthouse, 512 California Avenue, Libby.

Those wishing to attend in support of the petition are encouraged to do so and offer any pertinent
feedback regarding arguments made which they might feel compelled to share.

WASHINGTON, August 25, 2021 — As the nation continues to grapple with an affordable housing crisis worsened by the COVID-19 pandemic, USDA is committed to supporting our tenants and owners. In addition to previous actions taken by the Biden Administration, USDA will now offer:

vide direct support to its over-burden tenants, since the Spring of 2021, we have also worked to promote the Treasury
Department’s ERA program in rural America by contacting over 250,000 email subscribers, mailing 65,000 letters to un-assisted USDA tenants, providing hard copy materials in USDA state offices, and sharing information with key stakeholder groups at the national, regional and state levels.

State and local programs have distributed more than $5 billion in assistance out of the $25 billion allocated under the first round of ERA (ERA1). About 1 million payments have been made since January. But some state and local governments must do better. Money is available in every state to help renters who are behind on rent and at risk of eviction, as well as landlords.

Visit cfpb.gov/housing to learn more about rental assistance in your area.