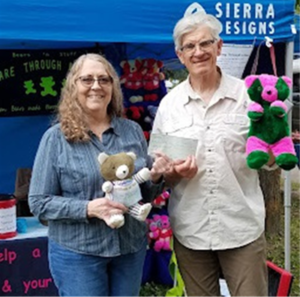 Dedi Coy rendezvoused with Bears ‘n Stuff at the Libby Vendors’ Market to pick up the second donation those little Prison Bears have been able to raise this summer.

The bears, as well as humans, at the Bears ‘n Stuff booth learned about a great opportunity for some over 55’s looking for part-time work!  The center is working with Easter Seals Goodwill to hire help.  To see if you qualify visit the Libby Senior Center.

Meals need delivering to seniors!  A couple of the bears volunteered but either their feet can’t reach the pedals, or they can’t see over the dash.  So, humans are being asked to step in and help out by volunteering Tuesdays, Wednesdays and Fridays.  If you don’t want to deliver meals but want to help afternoon volunteer positions are available at the center on Tuesdays and Fridays.  Give them a call at 406-293-7222 to find out how you can make a difference.

Come discover how you can join Bears ‘n Stuff and the Helping Hands at Washington State Prison making a difference for our kids and community.  The bears alternately roam the Farmer and Vendor’s Markets and will be at the Blues Festival and Ignite the Nites.  Want the bears to come visit with your organization to see how you can partner in all this?  Call Marge at 406-293-0514 or Cyrus at 406-293-9630.

Photo caption:  Dedi Coy visited the Bears ‘n Stuff den at the Libby Vendor Market.  She got her paws on a $400 check for the Libby Senior Center to help with meals for seniors.

Learn the bears’ back story on the Bears ‘n Stuff Face Book page.

The nationwide launch of the new 988 number will replace the country’s previous suicide prevention number, 1-800-273-8255, a change that mental health advocates have said is overdue and will help make services more accessible. Callers will be routed through regional 24-hour call centers in Great Falls, Bozeman and Missoula, where crisis workers  will help people find the nearest services.

“At two in the morning when I’m hopefully asleep, there’s somebody sitting in that office ready to take a call and ready to walk with somebody through a very difficult journey from darkness to light,” said Matt Taylor, with the National Suicide Prevention Lifeline, at a Tuesday presentation in Helena. “They’re at the front line of this message of hope, health, healing and recovery.”

The national 988 number was authorized through a federal law passed by Congress in 2020. Montana’s then-U.S. Rep. Greg Gianforte helped introduce the bill. Gianforte, now governor, emphasized its importance at Tuesday’s event, calling suicide “a tragic epidemic” in the state.

“Montanans manning the phones at these centers are trained crisis workers ready to provide confidential emotional support to people in suicidal crisis or emotional distress 24 hours a day, seven days a week,” Gianforte said. “Why is this so important? Well, when an individual is in crisis, time is of the essence. They need help right away.”

Montana had the third-higest rate of suicides in the nation in 2020, behind Alaska and Wyoming, according to the most recent data collected by the Centers for Disease Control and Prevention. Suicide accounted for roughly 26 of every 100,000 deaths in the state, and was the ninth-most common cause of death behind heart disease, cancer, COVID-19 and other fatalities.

During the past three years, Gianforte said, Montana’s crisis call lines have averaged about 10,000 calls annually. The state health department has allocated $400,000 in federal grant funding to bolster staffing at the three 988 call centers, operated by Voices of Hope in Great Falls, Help Center, Inc. in Bozeman and Western Montana Mental Health in Missoula. The centers will be staffed by crisis volunteers and employees with a minimum of 50 hours of training, according to Mandy St. Aubyn, a representative of the call centers who spoke at the event on Tuesday.

The governor’s office also said Tuesday that the 988 number will offer a specific prompt for veterans: dialing “1” will route them to the national Veterans Crisis Line.

St. Aubyn said Tuesday that staffers answering 988 calls will have access to a database of roughly 6,000 health and human services resources available on Montana’s non-emergency 211 website to find the most appropriate services, including drop-in centers and in-patient treatment for mental health and substance use issues. Historically, St. Aubyn said, roughly 72% of calls to crisis lines are de-escalated without having to refer people to crisis stabilization centers or emergency services.

In much of Montana, in-person emergency crisis services and psychiatric treatment options are limited. On Tuesday, Department of Public Health and Human Services spokesperson Jon Ebelt said there are currently 41 beds at hospitals and clinics across the state for individuals experiencing a mental health crisis, some of which are for less than 24-hour stays.

Temporary emergency detention beds for people who are a threat to themselves or others are even more limited. As of Tuesday, Ebelt said, there are four beds available for people in such crises at contracted facilities in Polson and Hamilton. Other crisis facilities in Helena, Butte, Bozeman and Missoula have closed temporarily or permanently since 2020.

The state is in the process of adding mobile crisis units that can respond to people experiencing a mental health crisis. Ebelt said those units currently exist in Butte-Silver Bow and Cascade, Flathead, Gallatin, Lewis and Clark, Lincoln and Missoula counties. Additional mobile crisis teams in Park and Yellowstone counties are in development.