Continued from page 1 by Brian Baxter

As the name suggests, pointers keep their heads low, maintain a steady gaze, and lift one of their front paws, taking the shape of an arrow, directing law enforcement officers to the bomb or drugs. This behavior is so ingrained in this breed, that at times, even GSP puppies that have never been trained will do it.

A GSPs temperament is typically very friendly, but you shouldn’t approach them without the permission of their trainer-handlers. A working dog’s training begins as soon as it is separated from its mother. Trainers, at first, treat their training like a game of hide and seek.

Mila and Argos were trained by Mark Rispoli of MAKOR K9. Lincoln County Sheriff’s Dept. trainer- handlers have been working with Rispoli and the dogs. Rispoli told The Montanian, “These dogs should be thought of as athletes.”

This breed’s speed, coordination, and grace, combined with their ability to learn makes them ideal for use in crime prevention and investigating for drugs and explosives.

According to the Sheriff’s Dept., the approximate cost for the two dogs and about 12 days of  onsite training in Montana is around $32,000. The Sheriff’s Dept. also has two specialized K9 vehicles with new sensors to protect the dogs. They received a $4,000 grant from Flathead Electric Co-Op for the vehicles. They also received a $5,000  donation from the DUI Task Force. County Commissioners helped too, with some PILT (Payments in Lieu of Taxes) grant money given as a loan. The Sheriff’s Dept. will begin efforts to pay back the loan by fundraising with Unite for Youth (UFY). UFY’s main goal is to keep kids drug free.

Sheriff, Darren Short said, “This has been a very long process and I am very excited to get started.” They have been working for over a year to get the dogs, and they have spent five months working with the trainers.

“We are going to take care of the dogs the same way we do our other officers,” Short said. They try to pair dogs with officers that are a match for the dogs’ personalities since they become teams.

Faulkner said that he got to name his dog and that she will live with him and go to work every day with him. The teams of K9 and deputy will be together nearly all of the time.

Short told The Montanian, “I’m honestly really excited to see the support for the dogs. They are a tool we have needed for quite some time in Lincoln County.”

Lincoln County said goodbye last week to long-time residents, Darren and Barbie Coldwell. The Coldwell’s departure was bittersweet; they’ve been an important part of the Troy community and Lincoln County for years. They will miss Lincoln County, they said, but they are excited to be moving closer to two of their children and moving on to a new chapter in their lives.

Darren accepted a new position as City Manager for Page, Ariz. and Barbie will continue her job with the U.S. Forest service. “We’re lucky Barbie works remotely so we can live anywhere,” Darren told The Montanian.

Daren was raised in Troy. His parents, Karen and Bob, moved there in 1962 for his dad’s first teaching job. Bob later became principal of Troy Elementary school. Barbie describes Darren’s upbringing as “a Norman Rockwell childhood with a sweet, loving family.” Darren left Troy for four or five years after college, but soon returned to his family and hometown.

Barbie met Darren in Troy in 1998 when she moved there to “work in the woods” doing silviculture for the U.S. Forest Service. At the time, she had 10 and 12 year-old boys who “fell in love with him immediately.” The couple raised  the boys together and soon they had a daughter, Allie. Barbie remained with the Forest Service and also enjoyed spending time volunteering in the community while Darren owned and operate Booze n’ Bait for 25 years.

Darren became Troy’s mayor in 2014 after being inspired to run for the office by their Pastor, Cameron Foote’s, sermon about stepping up to serve the community.

About three years ago, Darren decided to sell Booze n’ Bait and soon moved into the position of Lincoln County Administrator. “My career has made a 180 degree shift in the last three years,” he said. He worked diligently to improve his town and then his county by helping to address tough budget, staffing, and policy issues. He credits Troy’s city council and our County Commissioners for his success in those positions, and he feels that he is leaving the County Administrator position in a better place than it was when he took over. To date, a successor for that position has not been named.

Darren recently battled and beat a rare form of cancer and that, he says, has changed his perspective which is part of the couple’s reason for leaving.

According to Karen, “When they told me they were moving my heart sank, of course, but in my heart I knew it was the right thing for him. He’s been through a lot and has a different outlook now. I’m just so thankful he’s healthy.”

The couple’s daughter, Allie, now goes to Benedictine University in Mesa, Ariz. which is about four hours away from where they will be living. She received a scholarship, and according to her grandma, she is living her dream of playing college basketball. Darren and Barbie will be able to go to some of her games now, she said. They will also be able to see their son Billy, who lives in Arizona, more often.

A goodbye celebration honoring Darren was held on Wednesday, Nov. 6 at the County Commissioners’ office. His last day as Lincoln County Administrator was Friday, Nov. 8, and he left for Arizona the following day. Darren will start his new job there on Tuesday, Nov. 12. Barbie plans to travel back and forth until their home in Troy sells.

They will miss all of the community support, family and friends, Trojan Lanes’ chicken, and so much more, they said, but they will maintain a close connection to Troy. Darren’s mom, sister, and her family will remain, Allie plans to continue working on the Troy trail crew next summer, and they are keeping  some land in the area in case they want to build on it later.

In addition to spending time with their kids, the couple looks forward to exploring new natural landscapes, being closer to an airport, trying new restaurants, and buying kayaks. Their dogs are already lined up to participate in rattlesnake training, and they are looking for a home big enough for friends and family to visit. 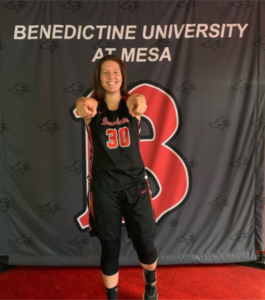 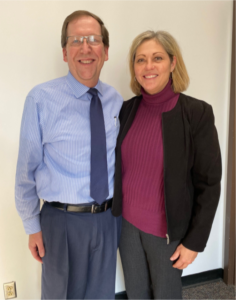