A court decision released yesterday is allowing enforcement of emergency rules to temporarily restrict the sale of flavored e-cigarette products in Montana to begin today, Wednesday, December 18, at 1 p.m.

“We have refused to stand idly by while a powerful industry hooks a new generation of users and puts them right in the path of the national outbreak of lung injury and death,” said Department of Public Health and Human Services (DPHHS) Director Sheila Hogan. “This has always been about protecting our most vulnerable and we are pleased that the Court chose to stand with Montanans and their health by allowing the emergency rules to go forward.”

Retailers who sell e-cigarette products are being notified about the effective date of the emergency rules via letter notification. Information has also been made available on the DPHHS website. The website provides guidance on how the emergency rules will be enforced, including through citizen complaints and inspections of retailers by local health officials.

“We appreciate that retailers will be complying with the rule,” Hogan said. “We’ve also heard from convenience stores and gas stations in Montana and share the same goals of protecting our youth and supporting our communities.”

DPHHS continues to investigate multiple potential new E-cigarette or Vaping Product Use Associated Lung Injury (EVALI) cases. In addition, the imminent threat to public health and safety caused by epidemic levels of youth use and addiction to these products remain unchanged.

E-cigarette products are currently required to undergo premarket review for safety by the FDA. A federal court has ordered the FDA to begin enforcing these safety rules by May 12, 2020.

In addition to nicotine, e-cigarettes can contain heavy metals, ultrafine particles and cancer-causing agents like acrolein. Some flavorings, particularly those found in e-juice, have been found to be toxic and associated with inflammatory and oxidative stress in lung cells and white blood cells.

A recent report by the FDA states that 96% of 12 to 17-year-olds who initiated e-cigarette use started with a flavored product, and 70% report the flavors as the reason they use e-cigarettes.

Research shows that kids who use e-cigarettes are four times more likely to smoke cigarettes in the future than kids who do not use e-cigarettes. Nicotine exposure in youth causes long-term structural and functional changes in the brain, can lead to long-lasting effects like lower impulse control and mood disorders, and can prime young brains for addiction to other drugs such as cocaine and meth.

In addition, the CDC has not conclusively identified a cause or causes of the outbreak of pulmonary lung injury and has only just found the first potential chemical of concern. Vitamin E acetate was detected as an association in a sample of 29 EVALI case-associated specimens. There are some EVALI cases, including in Montana, identified as nicotine-only and it is still not known what is causing EVALI in nicotine-only patients. As the CDC continues additional studies and testing, public health authorities are continuing the recommendation that consumers consider refraining from using all e-cigarette products.

After 34 years Nordicfest is over; A thank you from the Board of Directors

It is with regret that this letter has to be written.

This past September was the last Nordicfest Heritage Festival to be held in Libby.

The Board of Directors made this decision to close the door as we feel Nordicfest has unfortunately run its course. This was a very difficult decision to make.

Nordicfest was the dream of June McHachon, she and another couple the Holter’s talked to community leaders and decided to hold a mini-fest and since then Nordicfest has grown over the years.

We could not have lasted for all these years without the help of many, many volunteers from this community.

Therefore, we must thank everyone who gave any of their time and energy to make Nordicfest happen each year. Working with our board has been so rewarding, they all worked so very hard.

We must give special thanks to our Kings and Queens all through the years, the Princes and Princesses and the Knutes.

Thank you to everyone who had a special part to play in Libby Nordicfest Heritage Festival.

Tusen Tak (a thousand thanks) 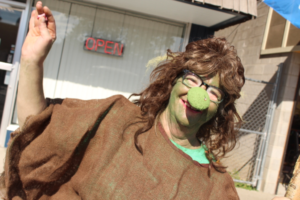 Photo taken during the 2019 Nordicfest Parade. Photo by Moira Blazi, The Montanian.

NOTICE IS HEREBY GIVEN that pursuant to the requirements of § 2-2-302, MCA, the Board of Trustees of Libby School District No. 4 intends to take action on the following matter at a Board Meeting to be held on the 13th day of January, 2020, at 6:30 p.m. in the KW Maki Theater, 724 Louisiana Avenue.

The possible employment of Beverly Perez (prekindergarten teacher) who is related to Ellen Johnston by consanguinity (blood) within the second degree (sister).

If you have any questions, comments or objections prior to said Board Meeting, please direct all such inquiries to: