On Saturday, Dec. 21, the U.S. Food and Drug Administration announced that the President of the United States had signed legislation the previous day amending the Federal Food, Drug, and Cosmetic Act, raising the federal minimum age of sale of tobacco products from 18 to 21 years.

“It is now illegal for a retailer to sell any tobacco product, including cigarettes, cigars and e-cigarettes, to anyone under the age of 21,” the release said. FDA plans to publish a final rule within 180 days. Montana laws still maintain a minimum legal age of 18 for purchase of tobacco products. In the meantime, some local retailers have  changed the age to 21. While the majority of retailers in Libby are waiting until the summer of 2020 and an official start date.

In addition to the new federal regulation regarding tobacco, Montana’s Department of Public Health and Human Services announced on Dec. 18 their immediate enforce of our state’s temporary ban on all flavored e-cigarette and  vaping products. The announcement came after a court decision allowing enforcement of the emergency administrative rules temporarily restricting sale of the products that were signed by Governor Steve Bullock on Oct. 8. The rules were not initially implemented because of a temporary restraining order which was filed afterwards.

The emergency rules will last for 120 days, the maximum allowed by law.  The rules are set to run until April 16.

The agency has also developed an online system for citizen complaints to be used if retailers do not follow the rules. The flavored vaping product violations form is available at dphhs.mt.gov.

According to DPHHS, “In 2019, almost one in ten Montana high school students vaped daily,” and 60% have tried vaping. E-cigarettes can contain heavy metals, ultrafine particles and cancer-causing agents like acrolein. Some flavors have been found to be toxic, and the causes of  EVALI (e-cigarette or vaping associated lung injury) cases are still being investigated.

Montana offers a My Life, My Quit Youth program for ages 12-17 who want to quit using tobacco and/or vaping. Free coaching through text, chat, or by telephone are included along with confidential enrollment and coaching.  To enroll go to mylifemyquit.com or text “Start My Quit” to 1-855-891-9989.

Facebook and community conversations are still abuzz with discussions centering around the prospect of a recreational pool in Libby. The Kootenai Wellness Aquatic Committee has released a fact sheet to clear up any misconceptions about the proposed pool that might still be circulating. Last updated in November, their fact sheet explains that the group involved in preliminary planning was formed by the Libby Parks District (a county agency) to evaluate feasibility and design opportunities. That committee has been meeting since August of 2018.

At this point, the next steps in the process include continuing to get community feedback on a preferred pool model, acquiring more extensive operations and maintenance estimates to fully evaluate costs, to establish a business plan for the pool which will be incorporated into the budget, and finally to calculate a mill levy estimate.

Of note, the cost of building the pool would not fall on taxpayers. Only ongoing operations and maintenance would be supported by a mill levy, and 40-60% of that amount is anticipated to come from user fees decreasing the tax burden further.

A public vote on the proposed levy is planned for this year, and a pool will not be possible unless it passes.

A definite location has not yet been decided, but according to their fact sheet, “A favorable option is the land across from City Hall (housing the recycling bins). This site is owned by the Lincoln County Port Authority.”

Major differences between the three pool designs being evaluated include the fact that one is  outdoor/seasonal use only, and two are year round options. One of the year round options also  includes a therapy pool and wading pool in addition to  a four (or six) lane lap pool.

Right: Three options for a proposed community pool in Libby that have been compiled into a public survey. 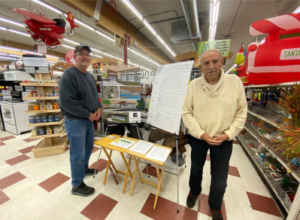 Above: KWAC committee members set up at Ace Hardware in Libby on Nov. 16  educating  and garnering public input about the proposed pool project. Photo by Tracy McNew, The Montanian.