Ericka Hartley woke up a little earlier than usual on Friday July 26 morning, at about 3:30 a.m., due to a call from her staff member Hailey.

Letting her know that the whole building of the Pure North Athletic club was flooded with two inches of standing water.

“Apparently, it was the input pipe to the water heater”, Hartley told the Montanian. “The whole facility was flooded, with just a little creeping into the city building next door”.

Clean up crews went in early to clean up  the scene and by early afternoon there was almost no visible signs of damage left.

“We are keeping people posted on Facebook and on our website,” Hartley said, “ we plan to open back up Thursday the first of August, and until them, we are going to try to offer some classes in the pavilion down at riverfront Park. We will be keeping everyone informed on our website and Facebook” 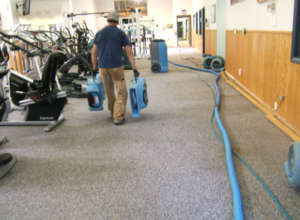 Cuffe, Montana State Senate District 1, to the role of PNWER president at this year’s Summit in Saskatoon,

Saskatchewan, July 21-25. Cuffe has been involved with PNWER as a member of the Delegate Council since 2013 and currently serves as Co-Chair of the Border Working Group. Cuffe has previously served as Co-Chair of the Workforce Development and Forestry working groups. He was elected to serve as vice president during the PNWER Annual Summit in Big Sky, Montana in 2015.

When asked about his vision for his term as PNWER President, Senator Cuffe said, “We will approach our opportunities and challenges with a positive mindset. We are a nuts and bolts operation at PNWER that gets things done. We help develop solutions, and we make things happen. We are a diverse group with many competing interests, personalities, and political factors, but in our region, we have many common interests and can find common ground to stand on. PNWER attracts those who care about the region and who believe that our region grows better and stronger together.”

PNWER announced their 30th Annual Summit will be held in Big Sky, Montana, from July 19-23, 2020. The Summit will explore shared challenges, discuss best practices, and promote regional relationships among those in the Pacific Northwest. Montana last hosted the PNWER Summit in Big Sky in 2015.

More than 500 regional legislators, business leaders, and policy makers met in Saskatoon, SK, this week for 4 days of in-depth discussion on US-Canada relations, trade, and cross-border solutions. ​For a full schedule of the Summit and more information, visit www.pnwer.org/2019-​ summit

In the late-night hours of July 26, 2019, the Lincoln County Sheriff’s Office received reports from several concerned citizens that a vehicle matching the description of the one involved in the apparent Murder/Suicide in Kalispell on July 24th, and the search for a missing toddler, had been seen camping in the West Fisher Creek area in Lincoln County.

Deputies responded to the area and conducted a search of the abandoned camp site.

On the morning of July 27th, Lincoln County Sheriff’s Office detectives, Flathead County detectives and detectives from Medford Oregon, continued the search of the area.  Canine teams from David Thompson Search and Rescue were called in to assist with the search.

With the assistance of the canines, a toddler’s body was discovered a short distance from the campsite.

Detectives are working on a positive identification of the toddler and to determine a cause of death.  This continues to be an ongoing investigation and detectives from all the agencies involved are working in cooperation with each other.