The Loggers (3-3) football team traveled to Browning, Mont. On Friday night and defeated the Indians (2-4) with a score of 47-28. Cy Stevenson lead the Loggers rushing attack with 169 yards on 16 carries including two touchdowns. Stevenson wasn’t the only Logger to reach the endzone on the ground, Jace DeShazer joined in on the fun with three touchdowns and 80 yards rushing on only seven carries. Ryder Davis scored twice, once on the ground and the other through the air as he connected with Tripp Zhang on a 22 yard pass. In total the Loggers ran for 293 yards on 39 rushing attempts.

The victory brought the Loggers conference record to (2-2) and keeps them in playoff contention, holding onto the sixth seed in the West Region in Montana Class A state play. “We need to be more sound fundamentally on both sides of the ball. We’re allowing too much pressure on our quarterback, and too many goofy penalties,” said head coach, Neil Fuller, when asked about Friday’s game take aways.

The Loggers head into their Homecoming game on Friday, Oct. 8 at 7 p.m. against a tough and well-balanced attack of the Whitefish Bulldogs (6-0) who remain undefeated this season. The last two contests between these rivals have ended with the Loggers walking off the field victorious over the Bulldogs. The Loggers will look to continue that trend on Friday night with a defeat of the Bulldogs. This Homecoming football game between the Loggers and Bulldogs will bring a playoff atmosphere here in Libby and fans can’t wait. Be sure to make your way to the game this Friday, wear your Logger colors, and be loud Logger Nation. Let’s hear those chainsaws!

Kids get a kick out of Kootenai Rapids Soccer

The third and fourth grade Kootenai Rapids soccer teams met at J Neils Park for an evening games last week. At this, age they don’t really keep score, it’s more for the love of the game and the learning process.

The 8th grade Libby Loggers played the
Eureka Lions on Tuesday, Sept. 28 in Eureka. The loggers came out on top with a  win. The final score was 30-12. 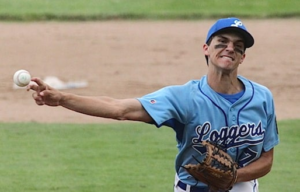 Congratulations to 2020 Logger and Troy High School alumnus Moxley Roesler-Begalke, on making the team as a pitcher for the NCAA DIII University of Puget Sound Loggers.

“It took a lot of hard work by Mox to get to this point and we are beyond proud of him. All of us from the “original” Logger Nation will be rooting for you and can’t wait to follow along.”

The tie was broken with a score card playoff which gave Malyvac 3rd place. He represented Libby in Polson at the State A Tournament.

The Loggers were hit with a few illnesses which cut both the boys and girls back to just four players each.

The effort was there by both teams, but sometimes the outcome is not what you hope for.

I’m very proud of all the hard work, commitment, and effort every one of these fine young ladies and gentleman put in this year.

It’s always a risk to compete but what you learn about yourself cannot be measured.