*Age limits reflect minimum and maximum age for enlistment, however, exceptions can be found by visiting each branch of the U.S. Military online and/or contacting your local recruitment office.

Tomb of the Unknown Soldier to mark 100th Anniversar

The Tomb of the Unknown Soldier is a monument to those who had fallen during World War I.

An unidentified soldier was exhumed from a WWI
American cemetery in France and transported to the United States aboard the USS Olympia.

The United States Congress approved the burial of the unidentified WWI soldier in Arlington National Cemetery on March 4, 1921.

The Tomb of the Unknown Soldier was dedicated on November 11, 1921.

– The front of the Tomb
(the East side) which faces Washington, D.C. and the Potomac is a composite of three highly symbolic
ancient Greek and Roman figures, Victory, Valor and Peace, commemorating of the spirit of the Allies of WWI.

– The north and south sides were divided into three
sections by fluted Doric
pilasters (fake columns), with an inverted wreath on the upper portion of each section. The six  inverted wreaths symbolize mourning and also represent the six major battle campaigns of WW1 that were fought by American
soldiers…

– The back of the Tomb
(the West side) bears the only
inscription on the Tomb:
‘HERE RESTS IN HONORED GLORY AN AMERICAN SOLDIER KNOWN BUT TO GOD”. 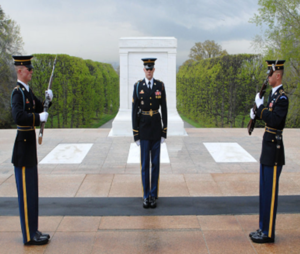 The Citizens Flag Alliance and the American Legion Americanism Commission want to know what moves you about Old Glory.

Is it the sight of the U.S. Flag snapping in the breeze above the county courthouse? Perhaps the hope it instills in the aftermath of a natural disaster? What about it makes you stand and salute when our flag passes by in a parade?

The American Legion’s Legiontown site is calling for submissions—brief words and an image under the new heading “Rally Around the Flag.”

From the collective submissions, the CFA
and the Americanism Commission will develop
additional media presentations—digital, video and print—to express pride in the flag.

Submit your story of how – or when, particularly – the flag has moved you by visiting legion.org/legiontown.

Post stories and photos via social media under the category “Rally Around the Flag.”

Our minds and our hearts get broken
When we return home, we walk into a
bar and get a wooden token.

The sadness and the depression of PTSD.
It might be less to you, but very
strong to me

Win or lose a conflict, well it doesn’t
even matter
It is all just Political power and
bulls%#! chatter

For maybe I lost some of my friends or
took someone’s life
Your understanding of this is so frustrating, it is like being stabbed with a knife

The generals and colonels get all of the
glory and riches
But me and my battle buddies did all the work and we were their bi&#%!s

War is as distasteful as what happened in the colosseums in Rome
But every soldier, well we fight to bring our
battle buddy home

When in uniform, sometimes I get stares
But then there are times I get
uncomfortable glares

It is not easy, for it is very rough
To walk around with pride and feel
really tough

Don’t get me wrong, not all days over
there are bad
For I made life-long friends and for that
I am very glad

When the National Anthem is being played or sung, stand tall and still in your boots
For the song of Old Glory belongs to
your roots

We have pride in our country, God, and the Red, White and Blue
But we get mocked and spit on by people like you

I see the small things in life I did not see before
And for you civilians that miss it, it makes my heart sore

Certificates, awards, ribbons and medals mean nothing to us
It’s the people we sailed or flew over with
in that empty shelled bus

Don’t give up on us, cause every day inside is a fight
Every new morning brings us hope and delight

I would do it all over again for the Red, White and Blue
God Bless the Soldiers, their families, and
may God Bless You

Libby Native, Tina Resch, will be the first to share that life after combat service can be
difficult to navigate.

With time she has learned to forgive herself, found comfort in the arms of her family and friends, and sought to bring an awareness about Veteran suicide into the light of the
public eye.

“I just lost another friend and fellow veteran this year,” shared Tina. “I understand how it
is just too much. Addiction and suicide are common.”

Since retiring, Resch has wanted to help fellow combat veterans by having signs made around the military holidays to remind others that fireworks for some trigger episodes of PTSD often too difficult to bear.

Though in researching how to bring the idea to fruition, she has received feedback that the gesture may bring unwanted attention and potential harassment. “The world has gotten so mean and lost empathy,” Resch shared.