MSU to host virtual event with
former President of Ireland

Tickets are now available for “Leadership and Climate Justice,” a live Montana State University virtual event featuring Mary Robinson, a former president of Ireland and leading climate
justice advocate. The event is set for 11 a.m. on
Thursday, April 8. Tickets are available to students for free and to the public on a pay-what-you-can basis.

Robinson’s talk will focus on leadership, education and advocacy for the poor and disempowered in the world, who are disproportionately threatened by
climate change. Following Robinson’s remarks, an
interactive audience Q&A will be led by MSU
President Waded Cruzado.

Robinson is known as a champion for climate justice, human rights, gender equality and corporate responsibility. She served as Ireland’s first female president from 1990 to 1997. In addition, she led The Mary Robinson Foundation – Climate Justice, served as the United Nation’s secretary-general’s special envoy on climate justice, and authored the book “Climate
Justice: Hope, Resilience, and the Fight for a
Sustainable Future.” She also served as U.N. high
commissioner for human rights from 1997 to 2002 and co-founded the Council of Women World Leaders. 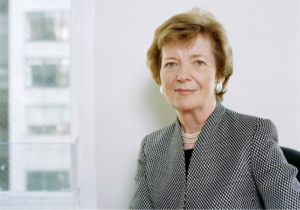 For tickets, visit tinyurl.com/ClimateJusticeMSU. For more information, call the MSU Leadership
Institute at 406-994-7275 or visit montana.edu/leadership or facebook.com/MSULeadershipInstitute. 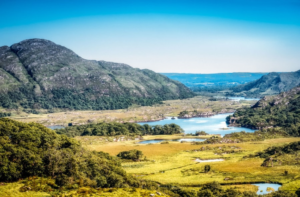 Continued from Page 1
by Brian Baxter

Glacier’s highest peak is Mount Cleveland at 10,466 feet, while Killarney’s high elevation is 2,762 feet on top of Mangerton Mountain. But the ecological similarities lie in the cool moist climates of both parks.
In Glacier, the continental divide runs through the park, and is influenced on the west side of the divide by the Modified Pacific Maritime Climate. Ireland’s park is influenced by the Atlantic Ocean Climate and to some degree by the Gulf Stream. Both parks experience high rainfalls.

The Lakes of Killarney that include Lough Leane, Muckross Lake, and Upper Lake provide sport angling for Brown trout and salmon. Rare aquatic species found there include Arctic char and Killarney shad. Invertebrates found in and around the Irish waters include the northern emerald dragonfly, caddisfly, and stonefly species. Mosses, lichen, and filmy ferns also thrive in the moist, humid climate.
Wet woodlands grow alder, ash, downy birch, and willow, along with grasses, rushes, and sedges. Heathers, dwarf bilberry, and greater butterworth – a carnivorous plant, grow in the bogs. Mammals within the park include introduced Sika deer and American mink. While wolves and golden eagles have gone extinct, native pine marten thrive, as do otters.
Killarney National Park also boasts a wealth of bird life – 141 species have been recorded. Species of concern include red grouse, ring ouzel, merlin, and peregrine falcons. The parks water bodies support grey herons, grebes, kingfishers, osprey, cormorants, golden eye ducks and mute swans. A small flock of Greenland white-fronted geese winter on the islands boglands. The park is also the site for a project to re-introduce white-tailed eagles. No doubt the naturalists from both parks in this potential Sister Parks arrangement will find lots in common to enjoy and share.

“Glacier National Park has a proud history of working with partners beyond our borders to exchange best practices in recreation, preservation and resource management,” shared Jeff Mow, Superintendent at Glacier National Park. “We look forward to building on that history by learning from and collaborating with our friends at Killarney National Park.” Both park managers are wholly aware of the benefits to be gained by exchanging forest and wildlife technicians, scientists, and naturalists, on a temporary basis due to their ecological similarities.

Butte, Montana is known for many things, but around this time as St. Patrick’s Day arrives, many reflect on its incredibly tight-knit community of Celtic origin. Being Irish in Butte, even if it is a fifth-generation connection, is strongly valued and honored as if one were of direct decent.
The Irish are well-known across history for overcoming many obstacles to survive and maintain a sense of dignity at all costs. Butte’s Irish influence owes much to the immigrants who settled there from numerous counties in Ireland from the early 1860’s to the 1880’s. Butte’s mines were a draw for many Irish folk – tough work, tough people.

Many labored in the gold mines there, but with time the riverbeds ran dry of the hard sought metal. Copper mines, including the large Anaconda mine close in proximity to Butte, then began to boon. In the early 1900’s, Butte was the world’s largest copper mining town.

It evolved quickly to become one of the most prosperous cities in America. The Irish had found treasure, indeed, compared to the poverty many had endured during several potato famines, most notably the Great Irish Famine which lasted from 1840 to 1859.
The famines had brought hundreds of thousands of Irish immigrants to America, many of which landed in Butte, Montana. By their will, persistence, and Gaelic strength, their people rose persevered. Attempted suppression by the British Empire for thousands of years had tempered them and the hard fighting Irish rose above hard labor to union positions, mine management, engineering, and company investors.
They and the hard-working miners sealed their fate and helped shape Butte’s future. All Montanan’s should consider celebrating
St. Patrick’s Day in Butte sometime. Unfortunately, the infamous St. Patrick’s Day Parade will not march this year due to COVID-19 restrictions. Yet a full list of 2021 activities that will indeed transpire can be found by visiting southwestmt.com/calendarofevents. 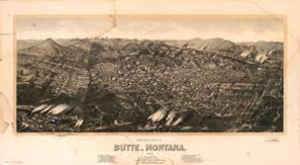 University of Montana
School of Journalism

HELENA — Curbside pickup and delivery of alcohol could soon be legal if lawmakers approve two bills heard on Friday in the Senate Business, Labor and Economic Affairs Committee.

Rep. Katie Zolnikov, R-Billings sponsored the bill, and told the committee it was partly inspired by conversations she had with a Billings bar owner who said Bullock’s removal of curbside pickup restrictions during the height of the COVID-19 pandemic made it easier for them to stay afloat. The bill passed the House last month on an 80-19 vote.

“It’s my personal belief that if this can work during a global pandemic, that it can work all the time,” Zolnikov said.

The bill also updates the definition of “growler” to include so-called “crowlers,” which are large, single-use cans of beer. Roth Jordan, who co-owns Montana Ale Works in Bozeman, spoke in sup
port of the bill and said the clarification allows restaurants and taverns to operate crowler canning machines, which he said provided a sanitary solution to filling beer orders during the pandemic. Growlers, which must be brought back to the business to be refilled, did not meet sanitation guidelines.

“This bill is really important to us,” Jordan said. “It might not seem like a big thing, but it’s going to make a big difference in our industry going forward.”

Other supporters from the alcohol industry, including the Montana Beer and Wine Distributors Association and the Montana Tavern Association, said the change would help them stay profitable, even in non-pandemic times. HB 226 drew no opposition in the hearing.

The committee also heard testimony on a new bill that would legalize beer and wine delivery. Sen. Ellie Boldman, D-Missoula, sponsored Senate Bill 320, and described it as “dovetailing” off Zolnikov’s bill. Boldman said SB 320 was originally intended to be part of HB 226, but became a separate measure because it provides only for the delivery of beer and wine, not liquor or mixed drinks.

“Folks like to have less government and more of an ability just to partner with private industry to get products that they need,” Boldman said.

The bill had no proponents, but had several opponents from within the alcohol industry. However, all gave “soft” opposition, as the bill in its original form would have created an entirely new licensing system for third-party delivery services, like Uber or Doordash. All opponents said they would support Boldman’s amendment to clarify that the delivery licenses would only be granted to drivers from within the alcohol-serving establishments.

John Iverson, representing the Montana Tavern Association, said the amended SB 320 would be a bill that would “make a lot of sense to a lot of people.”

“This is about a pizza and a six pack for $25 getting delivered to your house,” Iverson said. “That’s a business opportunity for the people I represent, and I think it’s a convenience that Montana consumers want.”

The committee did not take immediate action on the bills.

Austin Amestoy is a reporter with the UM Legislative News Service, a partnership of the University of Montana School of Journalism, the Montana Broadcasters Association, the Montana Newspaper Association and the Greater Montana Foundation