This year almost 100 energetic golfers turned out for a day of fun with twists and turns on every hole. The tournament was held ant Cabinet View Golf Course and featured games and prizes on every hole. Some of the unique twists included a toilet tee off,  cornhole, hockey sticks, and even wearing of a pirate patch to interfere with depth perception… and self perception. How do pirates know they are pirates? They think, therefore they arrr.

“We want to thank all of the event contributors, as well as the volunteers and golfers who came out to spend the day with us,” said Kate Stephens of Cabinet Peaks. “Each of you made this event a success, and we are grateful for your support.” 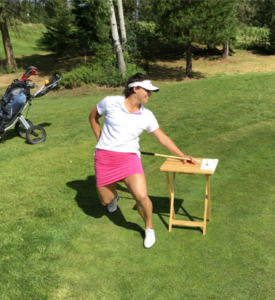 A wildfire North of downtown Libby broke out near the sand pit last Tuesday, July 30, burning seven acres of land.

The fire started late Tuesday evening near the intersection of Pipe Creek Road and Highway 37, according to recent U.S. Forest Service (USFS) reports. Libby and Troy firefighters, as well as the USFS battled the fire using a helicopter for several hours. By nightfall, it seemed the team of “Hot Shots” had contained the fire to a less intimidating blaze and they turned focus to dousing hotspots near the interior of the burned acres.

Fire officials advise the public to practice caution on hot and dry days as these conditions are prime for wildfires.

Another fire that recently started near Lower Thompson Lake, referred to as the Tornilla Creek Fire started during the afternoon on Tuesday, July 30, and had burned 50 acres of land in a remote corner of Sanders County near U.S. Highway 2 as of Wednesday, July 31.

The cause of the fire was unknow at the time of this article but it was being investigated.

Approximately 65 firefighters from DNRC and the USFS were assigned to the fire on July 31 along with multiple helicopters.

Northwest Montana firefighters have been responding to an increasing number of fires in recent weeks with more hot, dry weather.

Although there are no large wildfires in the area at this time, six were spread across the state as of Sunday, Aug. 4.

Remember to use basic fire safety when recreating outdoors during this fire season.

Never leave a fire unattended, completely extinguish any outdoor fire you create while camping, don’t throw cigarettes or matches out of the window of your vehicle, and be mindful of operating equipment that could create excessive heat or sparks. Most importantly, speak up and alert authorities if you suspect a wildfire has started.