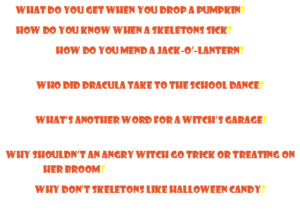 Halloween Activities for Families At Home:

Why do we call a pumpkin with a carved face a Jack O’Lantern? There are a couple of different theories. The first postulates that it comes from night watchmen in seventeenth century England who typically carried a lantern as they made their rounds. “Midnight and all is well!” Jack was a common nickname for someone you didn’t know, so the watchmen were often just referred to as Jack of the lantern. English folklore tells of an eerie phosphorescence produced by decaying matter on the moors, sometimes called will-o’-the-wisp, that at times looked like distant lanterns carried by some Jack and led unsuspecting travelers astray.

The other story involves the Irish tale of a drunk named Stingy Jack. The devil offered to buy him a drink in exchange for his soul, but when the devil turned himself into a coin to pay for the drink, Jack snatched it and put the coin into his pocket, along with his cross, which kept the devil from changing back. Eventually Jack did let the devil go, but only after he promised to wait until later to take his soul. Years later Jack met the devil in an apple orchard, but again managed to trick the devil by trapping him up in an apple tree and not letting him go until he agreed not to take Jack’s soul when he died.

Eventually Jack did die, but was denied entry to Heaven on account of his worthless life. Because of their deal, the devil also denied him entry to Hell and he was consigned to wander the Netherworld between the two. When he asked the Devil for something to light his way, the devil threw him an ember from the flames of Hell, but it was too hot to carry. It just so happened that Jack died with a turnip in his hand, so he hollowed out the turnip and placed the ember inside. Forevermore Jack has been wandering in the dark with just the glow from that turnip to light the way.

The first association of Jack O’Lanterns with Halloween comes from the Irish, who on All Hallows Eve hollowed out any number of vegetables – turnips, rutabagas, potatoes, beets – and placed a light inside to warn off evil spirits. They also served to keep Stingy Jack away. In the nineteenth century, there was a flood of Irish immigrants into the United States. Here pumpkins were quickly identified as even better for carving and Halloween Jack O’Lanterns were born.

This creamy and delicious Hocus Pocus milkshake is the perfect treat for kids this Halloween.  Plus, they are super easy to make, so mom can whip up this recipe in a blender in no time. And since it’s so easy, it’ll be one of your favorite Halloween recipes to serve.

In your blender, add lime sherbet, one drop neon green gel food coloring and milk. Blend until smooth, creamy and bright green! pour into a tall milkshake glass, leaving room for toppings. Add a swirl of whipped cream until it peaks. Add sprinkles and candy eyes. 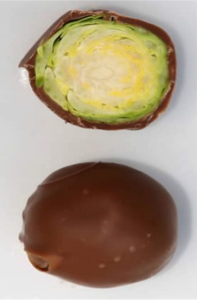 This Halloween prank requires a little bit of cooking know how. You chop the stem off the Brussel sprouts, rinse them and then prepare a chocolate coating.

The goal is to make them look like truffles or another round shaped chocolate candy. After cooling in the refrigerator you can leave them out on a counter as a bitter surprise for anyone who tries them. 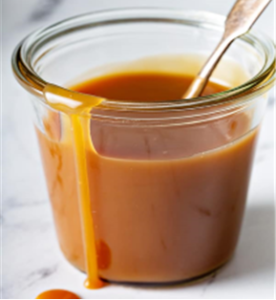 This Halloween prank doesn’t require as many cooking skills as the Brussel sprouts prank.

For this one you take a tomato, bell pepper, or other semi-soft, round vegetable and cover it in caramel apple covering. You can  purchase pre-made caramel wrap from the grocery store. Put a stick into it and serve. 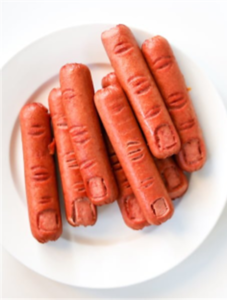 Take a hot dog and cut it in half both vertically and horizontally. It will now be in four pieces that all look similar. Take a hot dog piece and put the flat side down on a cutting board. This will be the “finger.” Next slice a fingernail shaped sliver from the top of the rounded edge. This will be the “fingernail bed.” Slide a “fake nail” into the fingernail bed using pieces of onion and then cut shallow straight lines across the top of the hot dog. 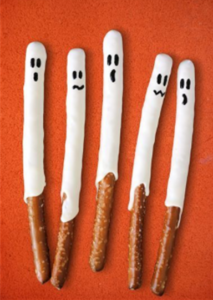 Simply microwave white candy melts and 1 tsp. coconut oil in 20-second increments, stirring until melted and smooth. Then, dip ends of pretzel rods two-thirds of the way in candy melts, shaking off excess, and place on parchment paper–lined baking sheet. Let set until firm. Use black edible marker to create your ghost faces. 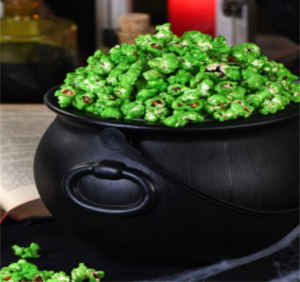 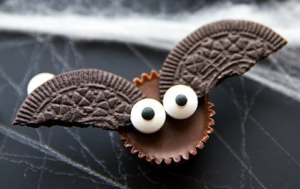 These easy Halloween bat treats require only 4 ingredients: edible eye candies, Oreos for wings , mini reeses cups for the base, and frosting to get everything adhered!