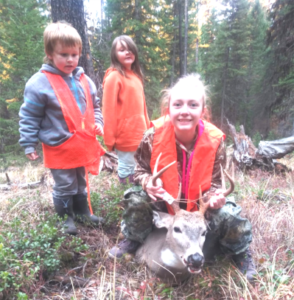 Beanka Scott shot this beautiful buck on the first day of youth hunt in Libby. Photo courtesy of Beanka’s father, Michael Scott. Interested in seeing yourself in The Montanian’s hunting college? Submit your photos today. Email news@montanian.com or visit us at 317 California Ave.

Each year, regulations seem  to grow and become more complex. Whether we are ready for it or not, big game season for rifle hunters is here. Fall equinox will inspire us. Hunters will feel the call, organize their equipment, decipher the applicable regulations, prepare for the hunt, and begin to dream of harvesting the big one.

The NOAA weather forecast extended outlook for October and November in our area is currently predicting 42% above normal temperatures; 34% near normal; and 24% below average temperatures.

John Vore, Montana Fish, Wildlife, and Parks Game Management Bureau Chief was quoted recently saying, “FWP Region 1 in the northwest part of the state, which is primarily whitetail country, experienced some tough weather the past two winters, so deer populations there are down.”

Rifle season started Oct. 26 and generally runs until Dec. 1. Bucks only whitetails from Nov. 2 to Dec. 1. General elk license for brow-tined bull elk only runs Oct. 26 to Dec. 1. Please check your hunting district exact location regulations before you head to the field.

Many experienced hunters in our area keep their hopes up for colder temperatures and some heavier snow during the last two weeks of the regular season. The white-tailed deer bucks usually head into the rut then, and heavier snows can get elk on the move.

As Montana FWP biologist, Julie Cunningham, once said, “Migrating elk move quickly when cold weather hits. They don’t dawdle; they pick up and go. We’ve had GPS collars taking locations every half hour, and what they show is there’s not a lot of resting or stopping. Elk have a destination in mind. It could be miles away and they will just go until they get there.”

This reporter has hunted deer and elk for four decades. Snow will cover bunch grasses and elk sedge. They have to make their way through deep snow and paw for forage, which burns calories. In colder winters elk will bed down in tight groups and sometimes move into dense timber, where the trunks and canopies provide some shelter and a bit warmer temperatures. Under these conditions look for elk on south facing slopes in early morning sun if there is no wind, or in the patches of timber between openings on the slopes. It’s a good strategy near the end of the season or in heavy snow. Bulls may be higher up.

Seasons are also opening up for black bear. Be sure to study the differences between black and grizzly bears, as we definitely have both in our corner of big sky country. Blacks have a strait face profile; tall pointed ears; no shoulder hump; and short claws. Grizzlies contrast the appearance of blacks in that they have a dished face profile; short, rounded ears; a shoulder hump; and long claws. 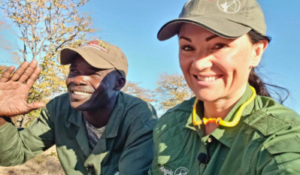 Angie with her African tracker and guide while on Safari. Photo courtesy of Angie  Tennison

It’s a long way from a log cabin at the foot of Swede Mountain bordering Libby Creek, to the wilds of Africa. Libby native Angie Tennison grew up there with her family in a home her father built from logs harvested on the property.

When asked by this reporter about it Angie said “A dream location for a kid who loved the outdoors.”

Angie told The Montanian “I will return to Texas for the announcement of the UEH winner at the Dallas Safari Club’s Annual Convention in January. I appreciate everyone’s support and interest in my adventure.”

To read about the Ultimate Extreme Huntress contest and to support Angie with your vote go to the website at: https://extremehuntress.co