Looking back thirty years to 1991…

Below: About eight (8) cords or firewood, two (2) dump truck loads, were donated by Louisiana Pacific Lumber Company to the Libby Lions Club for the second year.

The raffle was won by Dan Backen of Libby and was recently delivered to his place up Bob Tail Road.

All the money raised by the Lions through their fundraisers is put back into the local economy to benefit the people of Montana.

To Date the Lions have been able to put approximately $1,000 back into the community for glasses and other donations. 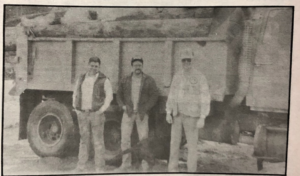 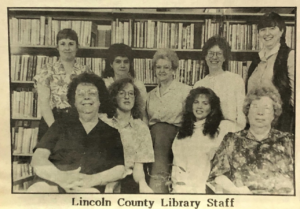 Here are some of them:

Sunday, March 24
—4:16 p.m. Officers extinguished a fire in a trash barrel on the playground at Asa Wood School.

— 12:26 a.m. A deputy advised he was in pursuit of truck 56T-5866 on Vanderwood Rd. from Hwy 2 at the end of the four lane. Suspect failed to negotiate a curve on Vanderwood and slid into the ditch . Officers arrested the driver for DUI first offense, possession of dangerous  drugs and failure to remain at the scene of an accident. Total bond was $520.

— 7:08 a.m. A worker advised of a burglary at the community college. Entry was gained by taking bars off the front door. Suspect broke into the pop machines. Detectives were advised.

— 3:08 pm. A man on Seventeen Mile Creek called DTSR to assist a male on Mount Henry with severe frost bite. 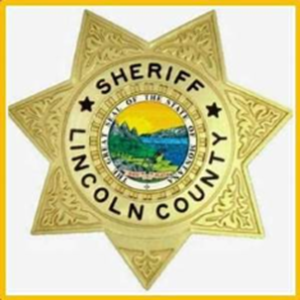 On April 3, 2021 at approximately 8:43 pm, the Lincoln County Sheriff’s Office received a report that an abandoned vehicle had been found in the Shannon Flats area off Highway 56, East of Troy, Montana.
The reporting party recognized the pickup as being involved in an active missing person case from June 2020regarding Daniel Dolan.
Lincoln County Sheriff’s Deputies responded to the area and it appeared that the vehicle had been there for an extended period.
They searched the immediate area but did not locate anything further.
On April 4, LCSO Deputies and Detectives again searched the area with the assistance of David Thompson Search and Rescue members and canines. A larger area around the vehicle was searched and plans were made to increase the search
area the next day.
On April 5, 2021, the search continued, and a body believed to be Daniel Dolan, 41, of Troy, was located. The body has been transported to the Montana State Crime Lab for positive identification and investigation.
Cause of death has not been determined.
The investigation is ongoing

On April 5, 2021 at approximately 3:55 am, the Eureka Area Dispatch Center received a call from a man who said he had just killed his son with a 38.

A Lincoln County Sheriff’s Office deputy responded to the residence in the Trego, Montana area assisted by a Eureka Police patrolman and a US Border Patrol agent.

The officers arrived and found Xennie Kirkedahl, 31, deceased from an apparent gunshot wound. A detective with the Lincoln County Sheriff’s Office responded to assist with the investigation.

Scott Kirkedahl, 57, of Trego was arrested at the scene without incident and has been charged with Deliberate Homicide and is being held in the Lincoln County Detention Center.

The body has been transported to the Montana State Crime Lab for autopsy .

The investigation is ongoing