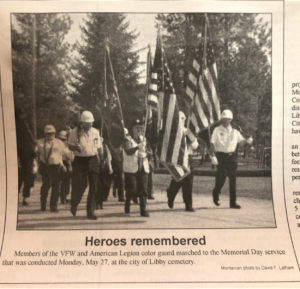 Monday, May 27, at the City of Libby Cemetery.

TRANSMITTING ON ANY LINCOLN

AUTHORIZATION FROM THE LINCOLN COUNTY RADIO

From the files at the Lincoln County

Sunday, May 21
10:19 p.m.—A man on Kootenai River Road reported he just got home from Idaho and found that two of his red Angus cows are missing.

Wednesday, May 24
7:18 a.m.—A woman in Bellevue Trailer Court reported her son rod his bike with red forks down to the bus stop and left it there.

3:22 p.m.—A person reported someone pulled up the stop sign and some USFS signs on Orthope Lake and Thirsty Lake in Eureka and then flung them aside.

Thursday, May 25
6:37 a.m.—A person on Rainbow Lane reported someone stole their lawn ornaments. They last saw them last night around 11 p.m. Thieves stole a little green shoe (planter), two large frogs, and a decorative flag for a flower bed (about two feet tall).