Debate at the Legislature turned to the issue of voter rights Thursday morning, as members of the House State Administration Committee heard testimony on a proposal to end same-day voter registration in Montana. Proponents said the change would calm Election Day chaos for local election administrators and reduce the likelihood of voter fraud. Those voices were outnumbered by opponents who criticized the proposal as a threat to the rights of thousands of Montanans and to democracy generally.

The argument centered on House Bill 176, which would close late registration for Montana voters at 5 p.m. the Friday before an election. Under current law, the registration period remains open until polls close at 8 p.m. on Election Day. The bill’s sponsor, Rep. Sharon Greef, R-Florence, said HB 176 is the first of several “election integrity” measures slated to appear this session.

“We are blessed with the privilege of voting, but we also must accept responsibility for that privilege,” Greef said. “Elections don’t pop up out of the blue and surprise us. If we are a responsible voter, we study the ballot ahead of time, and we also need to know that we need to register to vote.”

According to the National Conference of State Legislatures, 21 states and the District of Columbia had same-day voter registration policies on the books as of last year. Montana enacted its law in 2005, and bills seeking to overturn that law have popped up routinely since at least 2013.

Montana Secretary of State Christi Jacobsen spoke briefly in support of HB 176, as did Dana Corson, elections director at the secretary of state’s office. Sen. Mike Cuffe, R-Eureka, joined them, informing the committee that Montana elections are “heading for a trainwreck” if efforts aren’t taken to reduce the Election Day workload of local officials and allow them to focus solely on the vote. Cuffe carried similar legislation in the 2019 session, and said his only regret in reading Greef’s bill was that “I wanted my name there.”

Broadwater County Election Administrator Doug Ellis detailed his own Election Day experiences for lawmakers while testifying in favor of HB 176. He painted a picture of long hours and endless work managing polls while continuing to accept voter registration forms. Like election officials in many other rural Montana counties, Ellis holds a number of other offices as well, including clerk and recorder and school superintendent.

“Elections is probably by far the most trying position that I have, and a lot of it is because of same-day registration,” Ellis said. “It’s extremely hard to put information of all of the voters into the system, get their ballots counted and keep the numbers correct while you’re still registering people to vote.”

The bulk of testimony on HB 176, however, came from advocates for students, the elderly, indigenous communities and disabled Montanans urging the committee to vote the measure down. Katjana Stutzer, a lobbyist for the Montana Public Interest Research Group, or MontPIRG, noted that during the 2018 general election, 54 of the state’s 56 counties logged at least one same-day registrant. Ravalli County Clerk and Recorder Regina Plettenberg said later in the hearing that 171 voters in her county registered during the final two days of the 2020 general election — votes that would not have been cast if HB 176 were in effect.

Additional arguments against the bill focused on the challenges that newly admitted residents at assisted living facilities face in completing or updating their voter registration status, and on the obstacles people working non-traditional hours or living long distances from county courthouses contend with when trying to engage in the democratic process. At least a half-dozen opponents cited the fate of Legislative Referendum 126, a 2014 ballot measure to end same-day registration that was voted down by 56% of voters, as evidence that Montanans have already voiced their stance on the issue.

As varied as the oppositional testimony was, each argument circled back to the belief that ending same-day voter registration would rob Montanans of a right guaranteed by both the U.S. and state constitutions.

“These constitutional imperatives are something we ought to strive toward, not back away from,” said the ACLU of Montana’s Sam Forstag.

At this time, it is believed that these scammers are sending fraudulent text messages to phone numbers with a 406 area code in the hopes that any one recipient might be a current UI claimant. These text messages attempt to persuade recipients to click on a link which may install malware on their devices.

Pictured here is an example of how this fraudulent text message has recently appeared to recipients statewide:

DLI is warning all Montanans, not just those with active UI claims, to beware of these fraudulent text messages.

All official Department links end in the mt.gov domain. Potential fraudulent links may end in .php, .net, or .com.

DLI advises those that receive these messages:

– Do not respond to the number

Unemployment Insurance programs nationwide have seen an uptick in attempts by sophisticated criminals to defraud programs and secure benefits. DLI is continuously working to combat these illegal schemes.

DLI encourages those who believe they may be a victim of unemployment fraud to immediately report it at uid.dli.mt.gov/report-fraud, or call the UI fraud hotline at (406) 444-0072.

In response to a request from the National Guard Bureau and federal authorities, Gov. Greg Gianforte deployed 150 Montana Army National Guard soldiers to the nation’s capital for the presidential inauguration on Jan. 21.

“The Montana National Guard has a long, proud history of supporting our state and nation. I’m grateful to our selfless soldiers who are answering the call of duty again today to help ensure a peaceful transfer of power, a bedrock of our republic,” Gov. Greg Gianforte said on January 14 as deployment was assigned. 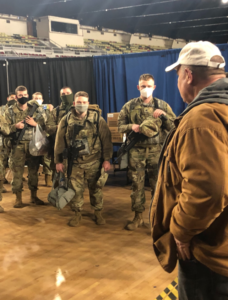 While in Washington, D.C., soldiers with the Montana National Guard were greeted by U.S. Senator, John Tester.  (Courtesy Photo)