The phrase “attitude of gratitude” is a common one and there are some studies that show an association between gratitude, happiness, and health. However, in our modern culture, some associate gratitude with complacency and lack of ambition.

Researchers at the University of California, Riverside disagree. One study involved participants who listed their goals for the next two months. They were then split into 3 groups with different weekly writing assignments. One counted their blessings and another listed their stumbling blocks, while a third group had a neutral writing assignment. Those in gratitude reported making more progress on their goals after two months compared to the other groups. Similar studies found that those who concentrated on their blessings over time had less doctor visits and exercised nearly 1.5 times as often. A study of students showed that those who regularly gave thanks generally had higher grade point averages and a stronger desire to contribute to society in an effort to “pay it forward”.

Gratitude, as investigated in these and other studies, appears to increase connectedness to others, stimulating humility and generosity. Several motivational speakers encourage actively appreciating those around us for what they do, helping to empower them while reciprocally building our own self-esteem. Praise has been shown to increase the energy levels of the recipient, while even a simple thank you can make others feel seen and heard, like they have worth. Giving appreciation when it is due can help make us more cohesive and supportive as a community and in these troubled times, a touch of humanity is usually a welcome thing.

This Thanksgiving, as we celebrate with family and friends, may we try to broaden our circle of gratitude and make it a consistent part of our lives. It benefits not only the lives of those we touch, but our own lives as well. 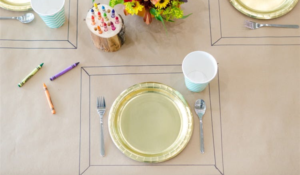 Kraft paper as a Thanksgiving tablecloth isn’t just for kids, you know. Lay it out on the adults’ table too and ask them to write or draw what they’re thankful for this year.

Have a cup of Crayola items like crayons and colored pencils ready to go.

Express Thanks In a Center Piece 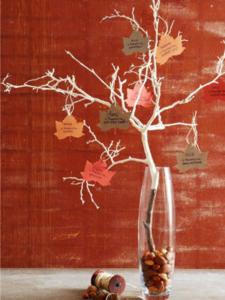 There’s a clever way to remind you and your family of the true reason for the season, and create a tree centerpiece in the process, too. Have family members write something they are thankful for on a leaf shape, cut from construction paper in fall colors. Punch a hole in the top of each leaf, and tie on string or twine to hang from a branch. You can paint the branch white or leave it natural. Prop the branch in a tall vase filled with acorns, nuts, or small rocks.